Most users of the mainstream media are vaguely aware of the constant stream of economic data reported between crucial updates on the Kardashians and other drivel that currently passes for legitimate news.  With arcane names such as the Purchasing Managers Index and New Orders for Nondefense Capital Goods less Aircraft, it is easy to see why much of these data can cause otherwise inquisitive eyes to dart straight to the sports section. But taken in aggregate, and over an extended period of time to smooth out inherent volatility, such data tell the tale of the condition of the economy, its bright spots and areas of lingering weakness. Recent numbers, at least at first pass, have been encouraging. Yet when applying slightly greater scrutiny, one uncovers wounds that have been difficult to heal.

GDP: Stuck on Low Gear
One recent headline-grabber was the upward revision of Q3 GDP growth to 3.6% annualized. Quite an improvement over the previous five quarters, where growth averaged 1.5%. But before declaring an American wirtschaftswunder, it is necessary to point out that inventory build-up…that is goods produced but have yet to find a home….accounted for one-half of the gain. Filtering out inventory factors, a more pedestrian rate of 1.8% is in line with the roughly 2% growth in which the country has been trapped since 2011. 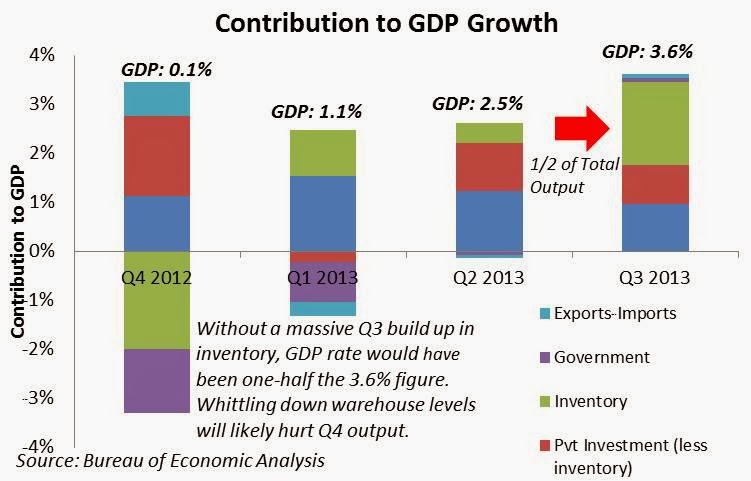 History indicates that excessive inventory gains tend to suck growth out of ensuing periods as prudent managers whittle down warehouse levels. That adversely impacts everything from worker hours and electricity usage in factories to fuel demand for the nation’s trucking fleet. High inventory levels also can lead to price slashing to move products, which cuts into corporate profit margins.

One way gauge the economy’s heartbeat at its most basic level is the Final Sales to Domestic Purchasers data series (speaking of arcane titles).This scrubs out the effects of both inventory gyrations as well as exports, in order to determine how willing American households and managers are to open up their wallets. As seen below, for five of the past seven quarters, final sales have lagged top-line GDP growth. For Q3, Final Sales growth was 1.8%, which is what it has averaged since the beginning of 2011, compared to slightly higher…but still forgettable…2.1% for the overall economy. For some perspective, Final Sales averaged 2.9% between 2000 and 2006 when the economy was chugging along at a 2.6% clip. 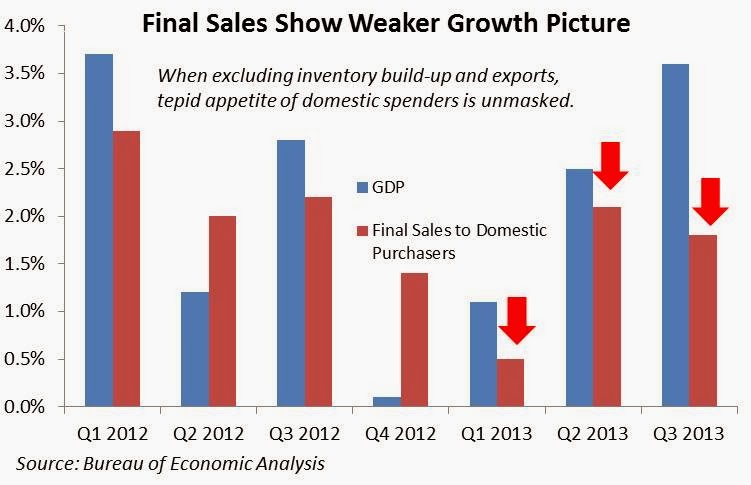 Business Investment: The Real Driver of the Economy
While personal consumption accounts for roughly 70% of the U.S. economy and often is used as a proxy for the overall health of the marketplace, the real engine for durable, long-term gains is business investment. Not only does such investment lead to productivity gains, which in turn leads to a more skilled workforce and higher wages, but also complex manufacturing is one of the sectors in which the U.S. still ranks among the global elite. That along with ever-creative ways to improve the cheeseburger. It is healthy for the country to have sleek, automated factories producing precision-crafted capital goods (often for export) rather than churning out volumes of low value products like t-shirts and rubber duckies. The broadest investment category in GDP data has registered strong gains over the past several quarters, but much of that is due to a rebound in the residential housing sector, which is peculiarly lumped into this bucket. Much of housing’s gains are due to a pronounced base effect after the sector spent years in the dumps. A number which more cleanly captures output of products like capital goods and computers is the business equipment series. After having been a strong contributor to growth in the wake of the recession (again partially due to pathetic 2008 and 2009 base effects), such investment has cooled dramatically over the past year, with Q3 investment being flat. 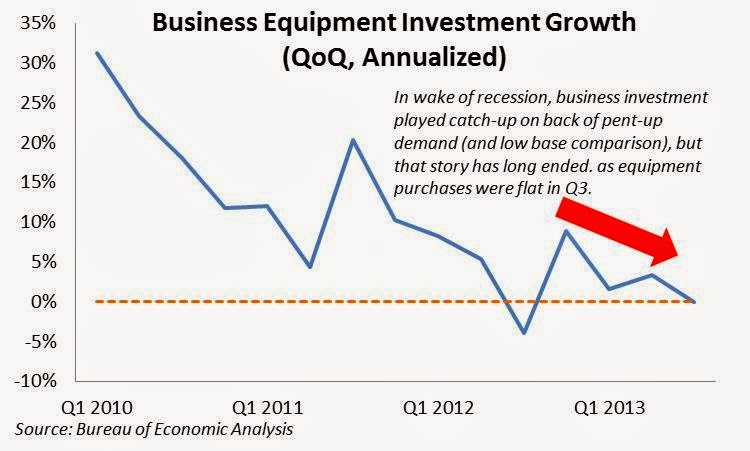 From 2000 to 2007 investment in business equipment averaged 4.2% annualized. A consistent return to such levels would signify confidence by the nation’s businesses that growth prospects are sufficient to justify ramping up purchases (often on credit) of machinery, computers and logistical equipment. While investment in business equipment has belatedly clawed its way back to its pre-crisis proportion of the broader economy, real estate has not. As seen below, during the bubble years, residential real estate investment rose from 5.2% of GDP to over 6%, eclipsing business equipment investment for much of that period. Since then it has dropped to the 3% range. Given the structure of the U.S. economy, residential investment is joined at the hip with personal consumption, partly due to the need to outfit housing with furniture and neat gadgets like turbocharged espresso machines, and partly due to the nifty financial engineering which enabled homeowners to use their houses as ATMs, thus increasing the magnifier effect of the sector. Those days are long gone….which is not necessarily a bad thing. 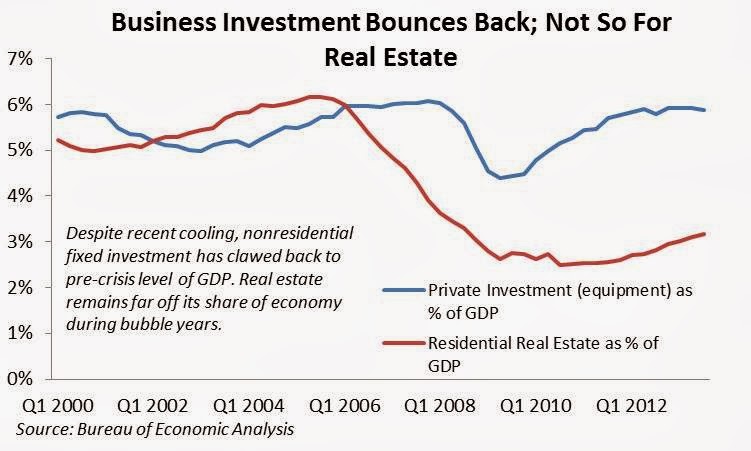 Cooling investment in equipment is also reflected in recent orders for durable goods, which is considered a trusted barometer of future economic prospects. The new orders data for core capital goods decreased 0.6% from September to October. More worrisome is the establishment of a trend, which has seen the three-month moving average in negative territory for the past four months. 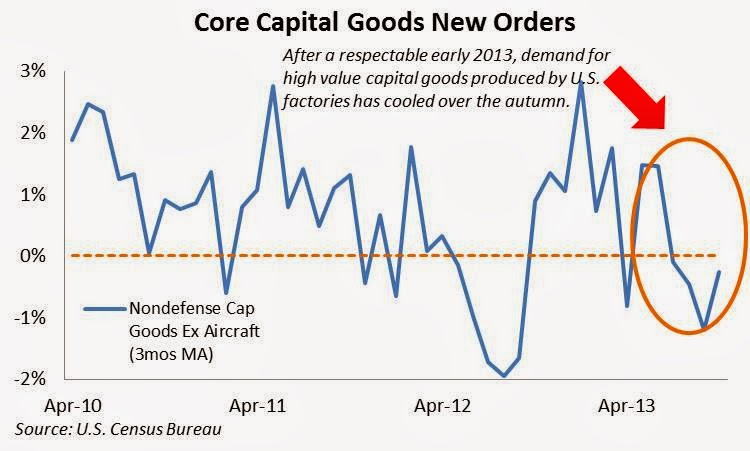 PMI: A Good Harbinger for 2014?
The aforementioned GDP data for recent quarters, by definition is backward looking. Like the new orders for capital goods data, certain components of the ISM’s Purchasing Manager’s Index are also regarded for their ability to gauge the future path of the economy. This report takes the pulse of managers in the trenches, those actually writing the checks. If they don’t have confidence in future prospects, the checkbook...for payroll, increased production and equipment purchases….likely stays in the desk drawer. 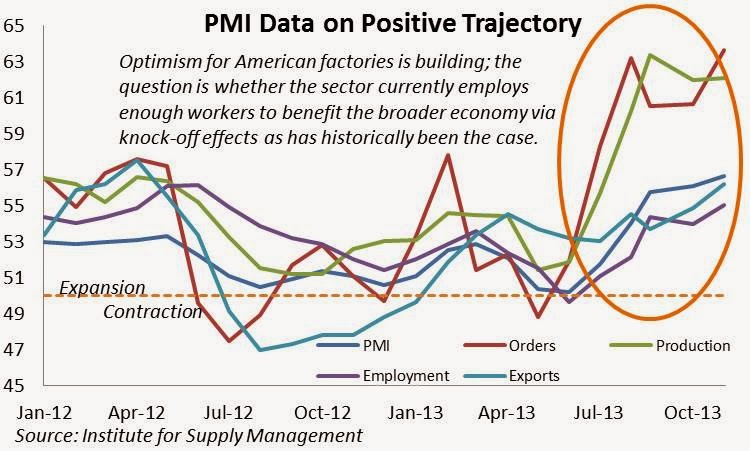 Fortunately, as seen above, recent data have impressed with many key sub-indices of the PMI having greatly accelerated over the latter half of 2013. New orders and production have led the charge, whereas employment, has slightly lagged (but still registered its strongest gain since early 2012). The PMI is a diffusion index where numbers greater than 50 indicate expansion in the manufacturing sector. Not only has the headline PMI number been above 50 since late 2009, it is well above 42, which is the threshold indicating growth in the broader economy. Why does 42 in the manufacturing sector infer growth in the overall economy? The answer is in the changing composition of the workplace. Manufacturing has been in decline for decades so even in expansionary years, the nation’s factories continue to atrophy. 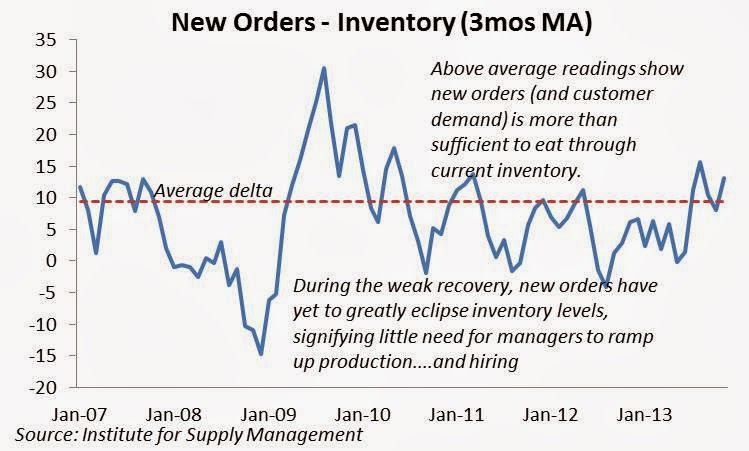 Job Gains: Belated Growth…And In The Wrong Places
The diminishing fortunes of the nation’s manufacturing sector are also on display in the jobs data. Since 1990, manufacturing jobs, as a share of nonfarm payrolls has fallen from 16.3% to 8.8%.  In its place are increases in dubious sounding service sector categories like hospitality and leisure, which have seen their share of total payrolls rise from 8.5% to 10.4%. 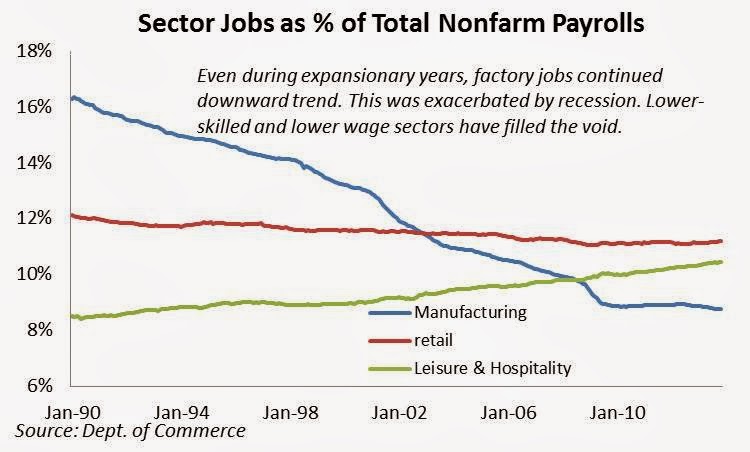 Historically, manufacturing jobs have been key drivers of the economy as they offered solid wages and opportunities to build skills. On the contrary, in a service economy, one can froth a latte only so many ways.  Just as important, the sector’s workers, confident in their futures, would enthusiastically partake in the ever so American tradition of rampant personal consumption, thus creating an outsized magnifier effect, benefiting the entire economy. Manufacturing still offers plumb positions, but the landscape is different. The current emphasis is on intelligent manufacturing, which is a euphemism for automation and fewer workers. One guy with a laptop in a control room can do the tasks it took a dozen to complete only a few decades ago. This trend has resulted in the sector losing the critical mass of workers necessary to fuel ancillary segments of the economy. Now only the local Prius salesman and yoga instructor benefit from this more highly skilled….yet much leaner….workforce. Need numbers to back this grim claim? In 2007 the nation’s factories employed 14 million workers. During the recession, it lost 2.5 million of those. In the mother of all jobless recoveries, it has only clawed back 554 thousand of those positions, a paltry 22%. 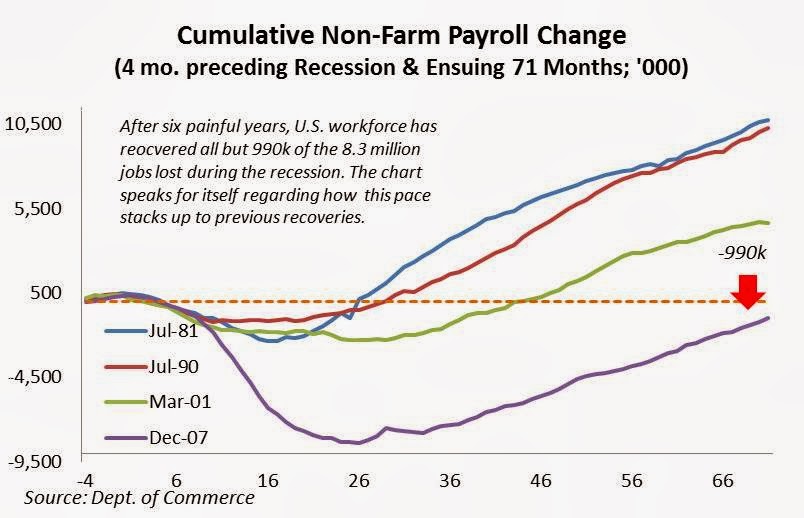 Aggravating the travails of the nation’s factory workers, is the slow pace of overall jobless growth. As seen above, the nation still has nearly one million fewer jobs than it did at the outset of the recession…and it has taken six (!!) years to reach this point. The composition of the meager job gains does not help matters. Since 2008, workers in part-time positions for economic reasons (i.e. that’s their only option) have risen from 3.1% of nonfarm payrolls to 5.2%. 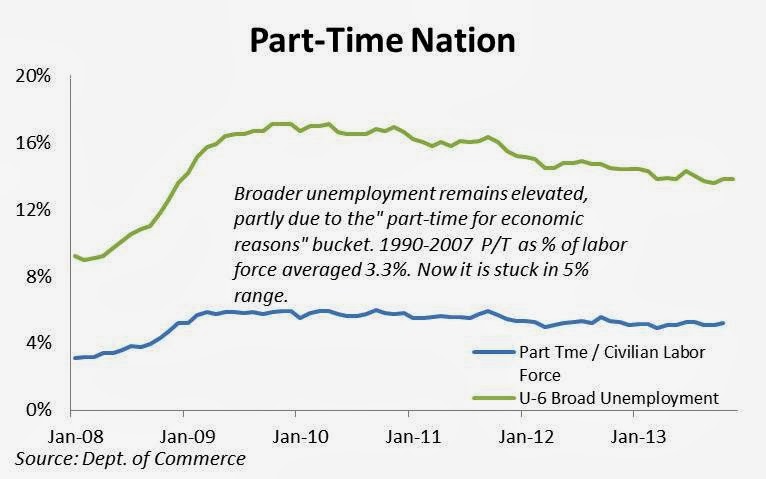 Such part-time workers, along with the unemployed and those marginally attached to the workforce, are components of the broad U-6 unemployment rate which remains a depressing 13.8%. The chances of this bulging bucket, by historical standards, being strong contributors to personal consumption during the Christmas shopping season (and beyond), in economic terms, is zilch.

A Cold Shower
The take-away from recent data is that the bifurcation of the American economy continues. If one has mad engineering skills or owns a Boulder County yoga studio, things are rolling along. For those ill-prepared for a complex 21st century workplace, prospects simply don’t look good.