With 2013 firmly in the rearview mirror, investors are using yet another arbitrary point in time as an occasion to reflect upon the market’s recent moves and divine what may be in store for the year ahead. The equities market in 2013 can be characterized as the continuation of the beta trade, meaning all sectors in the S&P 500 rose on the same tide, with some benefitting from the giddiness more than others. The year also saw the luster wear off the post-crisis, Fed-induced, distorted (pick your modifier) rally in fixed income instruments. There are plenty of analyses offering up post-mortems on the year that was, and an even greater number of forecasts for 2014, with most of which falling into the buckets of being simply wrong or borderline absurd. The changing of the calendar also prompts portfolio managers and retail investors alike to adjust their tactical allocations, especially as many a portfolio got out of kilter given the solid……well preposterous…run that equities have experienced in the post-crisis era. 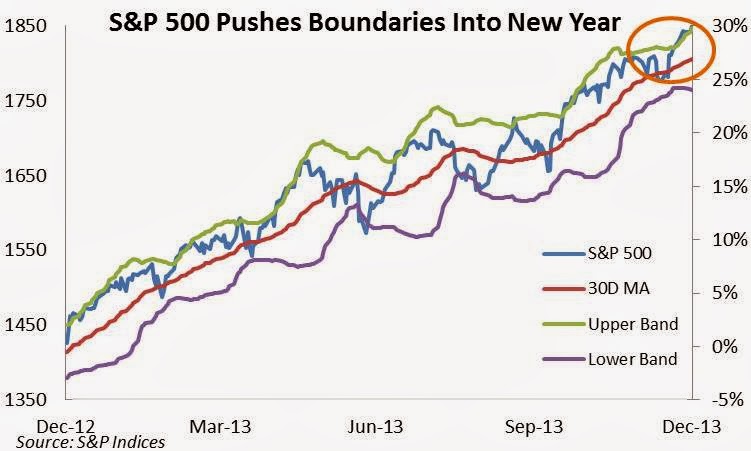 For most investors, including long-only professional managers, tweaking portfolios consists of rebalancing asset classes and sectors relative to the longer-term strategic allocation, changing the strategic allocation itself, or if exceptionally paranoid, shifting into cash. A third possibility is to hedge the portfolio by layering on some simple yet effective derivatives. Despite their reputation as a reckless tool used to hungrily goose performance, instruments such as options and futures contracts, when judiciously employed, can act as an insurance policy protecting past gains, and access exposure to bullish themes in a cost-effective manner. It is true that many of such instruments are the domain of sophisticated, institutional investors with some serious firepower on their balance sheets, but when feasible, other segments of the investing public can employ similar tactics to buttress their portfolio. 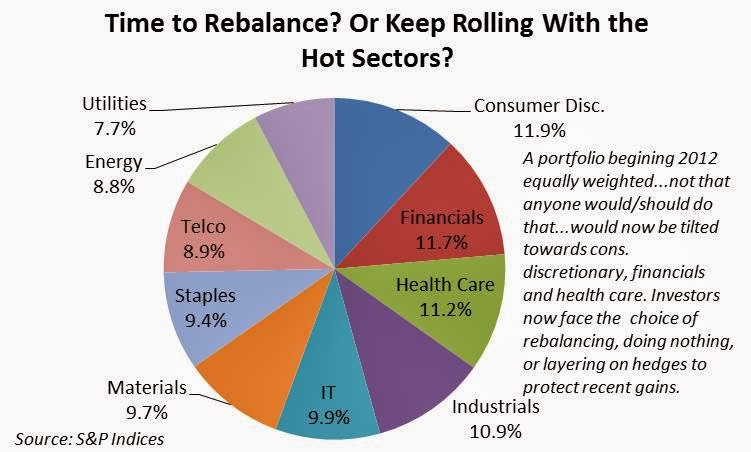 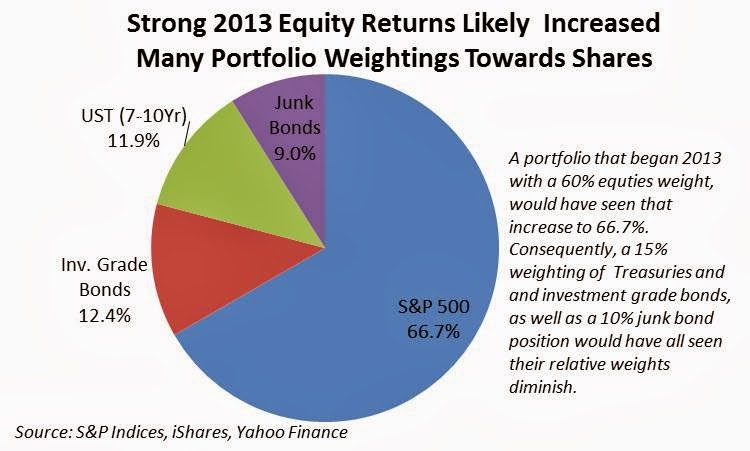 There is no hard-and-fast rule determining which part of one’s portfolio is ripe for hedging. This aspect of investing falls under the category of more art than science. Areas which may be fertile, however, include sectors that have euphorically gotten ahead of their fundamentals, securities which have lagged the market for no logical reason, or anything where the intrinsic value does not jibe with underlying economic conditions.  And with the S&P 500 rallying 170% over a five-year period typified by 2% GDP growth and employment in a complete funk, there is plenty of reason to think a correction is more than overdue. With such an uneasy backdrop, one may ask why not simply load the portfolio up with liquid, defensive instruments, taking the unreasonably massive gains of the past few years as a gimme? In normal times, that would be the prudent thing to do. But these are extraordinary times in which we live. Not Armstrong on the moon extraordinary, but an era of a $4 trillion Fed balance sheet and government debt still stuck at 100% of GDP extraordinary. With market rationality tossed aside, an investor may as well adhere to the adage the trend is your friend and keep riding the bull. If choosing that path, however, one will sleep much easier if his portfolio is adequately hedged.

Equities
The 2013 leg of the bull market was a story of P/E expansion with the 12-month trailing P/E ratio based on operating earnings rising from 14.7 to 17.2 over the year. This was the major driver behind the S&P’s 29.7% rise, as earnings grew a rather subdued 10.7% over the period, which in fairness, was at least better than annual rates registered in other recent quarters.

Investors’ willingness to pay more per unit of earnings was also reflected in another P/E metric, Robert Shiller’s P/E ratio, based on earnings over the prior 10 years. The beginning of 2013 saw the long-term P/E at 21.2, which is what it has averaged since 1980. By December the premium for owning shares had risen nearly 20% to 25.4. Fund flows echo this transition into equities as several years of outflows from domestic equity funds were finally reversed. It only took shareholders stung by the financial crisis four years to rediscover equities, and stewing that they missed out on much of the ride, they tossed fundamentals aside and demand alone drove the market higher.  And how many times have we heard that a sure sign that a rally is in its final stages is when the broader investing public becomes consumed with chasing stocks? 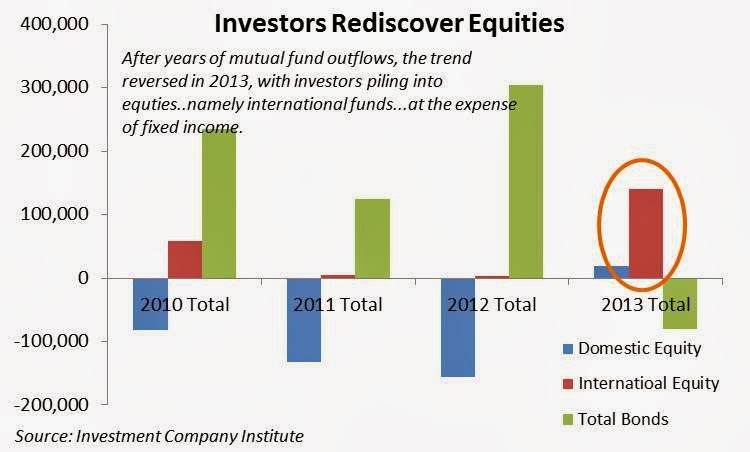 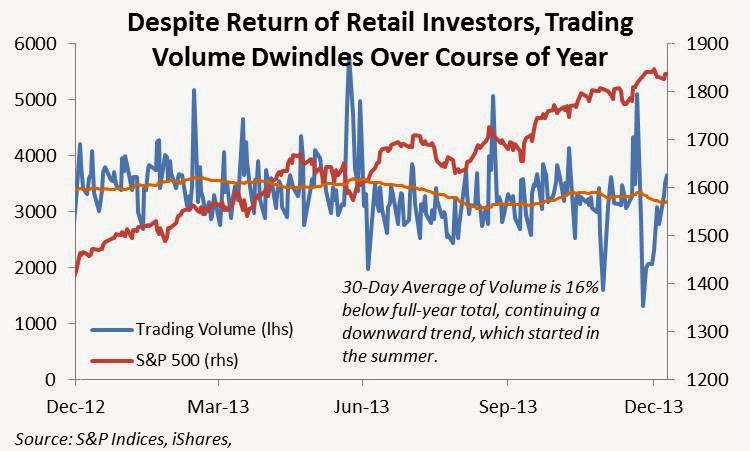 The Hedge
If one is of the mindset that the rally may be due for a break…if not a correction….the next question is, where to hedge? As seen in the chart below, consumer discretionary, healthcare and industrial names have outperformed the market. Two of those sectors are cyclical, meaning they are susceptible to a dip in the economy, which is entirely plausible. Despite optimistic incantations from Wall Street, chronically slow growth does not preclude the possibility of an eventual recession. The current expansion measures 73 months, and since 1945, the average duration of expansions has clocked in at 58 months. The other hot sector, healthcare, could be in for a bumpy road as consequences of the Affordable Care Act’s roll-out continue to be uncovered. 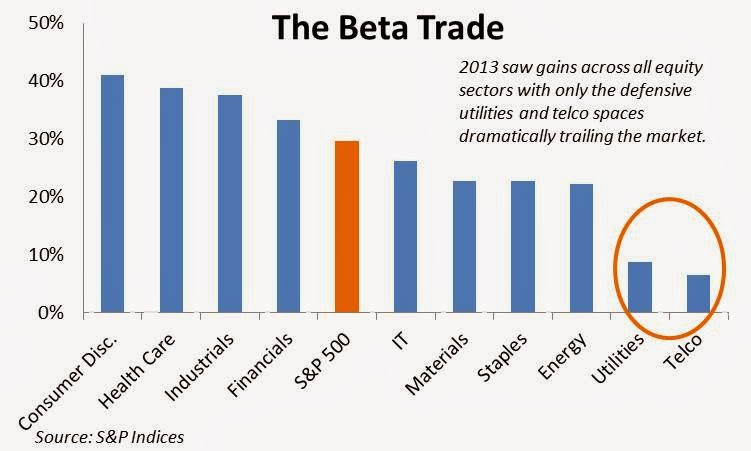 Investors aware of these realities, yet unwilling to pare back their exposure, could execute a variety of tactics. The highest flying shares could be candidates for a protective put strategy, where the purchase of put options on names already in the portfolio acts as an insurance policy, locking in recent gains should prices fall beyond a specific point. For those more bullish, yet still thinking the pace of the rally may subside, a covered call strategy may be appropriate. Here selling call options on portfolio components can increase yield, but on the flipside, cap the earnings potential should shares go on another tear.

The two clear laggards of 2013 were the historically defensive sectors of utilities (8.8%) and telecommunications (6.5%) as investors preferred more growth-oriented names. If one expects these sectors to either play catch up with the broader market in 2014 or benefit from investors retreating into defensives, buying call options on select names within the sectors could be a tactic with an attractive risk/reward profile. What makes any of these strategies cost-effective ways to modify exposure is the fact that volatility….a key ingredient to options pricing….is at historic lows. As seen below, the VIX index…the so-called fear gauge….is 43% below its 2008-2013 average. Coupling low volatility with relatively deep out of the money strike prices…another contributor to options pricing….enables investors to take advantage of tranquil market conditions to hedge their portfolio against any curveball 2014 may throw their way. 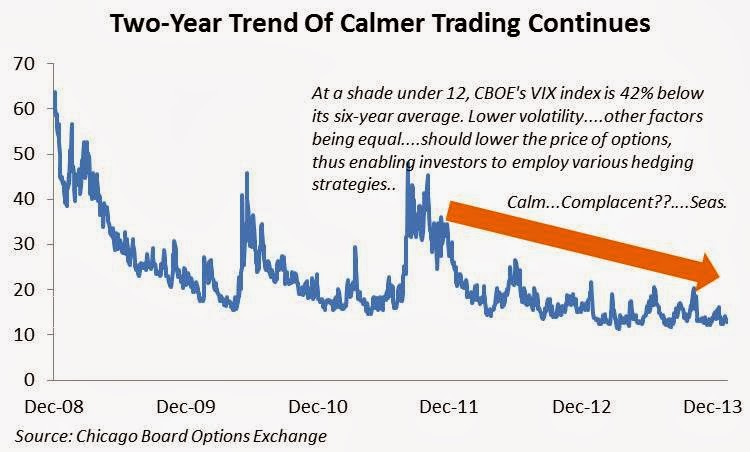 Fixed Income
The clear loser of 2013 was the fixed income space as the U.S. Treasury curve underwent a bear-steepening, meaning longer dated bonds sold off as investors expected the Fed to slowly remove its loving hand from the marketplace. While these pages stick by the expectation that bonds are turkeys in the short run, it is fair to ask whether this sell-off marks the end of the multi-decade secular bull market or authorities will continue on with a strategy of financial repression, which tilts the fixed income market towards government securities and low nominal interest rates. In the case of the latter, the downside of bonds is limited, although the outcome for the nation’s savers…if there are any left…..is grim. 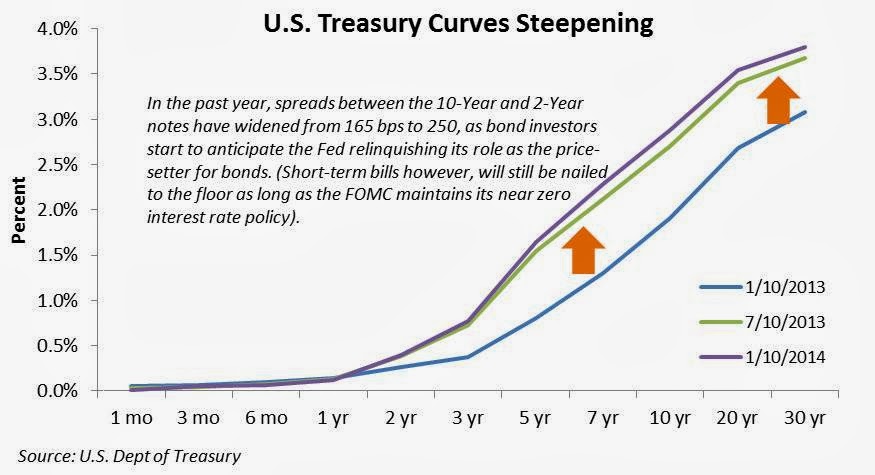 Current yield levels on Treasuries reflect the expectation that the economy will continue to grow in 2014 and that the Fed will maintain…if not add to….its paltry $10 billion tapering of monthly asset purchases.  Yet if either of those assumptions fails to materialize, a reversal back into the safety of Treasuries could occur. Hedging against a rates reversal is more complicated as interest-rate derivatives are largely the realm of institutional investors.  For those with that capability, however, the chart below illustrates how purchasing futures contracts on 10-Year Treasuries can enable investors who have recently culled their fixed income holdings to still participate in a bond market rally. 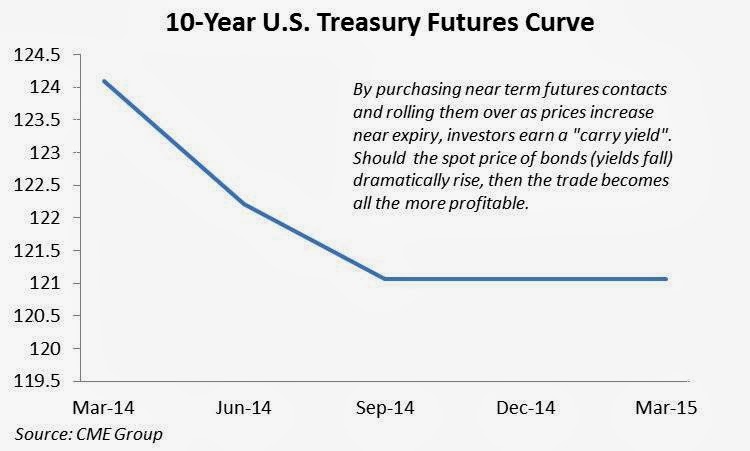 As with any futures contract, the shape of the curve in part determines the profitability of the position. Futures prices reflect the expectation that yields will rise (prices will fall) over the course of 2014).  If prices remain at current levels, those who bought discounted futures positions will benefit from a carry yield when they roll over the contract. This is the same dynamic exhibited in several commodities futures curves. If the spot price falls towards the purchase price of the contracts, profitability diminishes.

Emerging Market
Assets associated with emerging markets also endured a brutal 2013. If one is a believer in the strong secular emerging markets theme…as this analyst is….then the sell-off presents an opportunity to gain exposure at discount prices.  While the selling was broad-based, some markets suffered more than others. Many for good reason. As with any emerging market investing, one should pay special attention to transparency, liquidity, commitment to the rule of law and free markets as well as to sound macro-finances. Those alone eliminate about half the emerging markets space, including the entire eastern seaboard of South America. And while Turkey has been an investor darling over the past decade given its pro-market reforms, the current political strife is reason enough to stay away for a while. 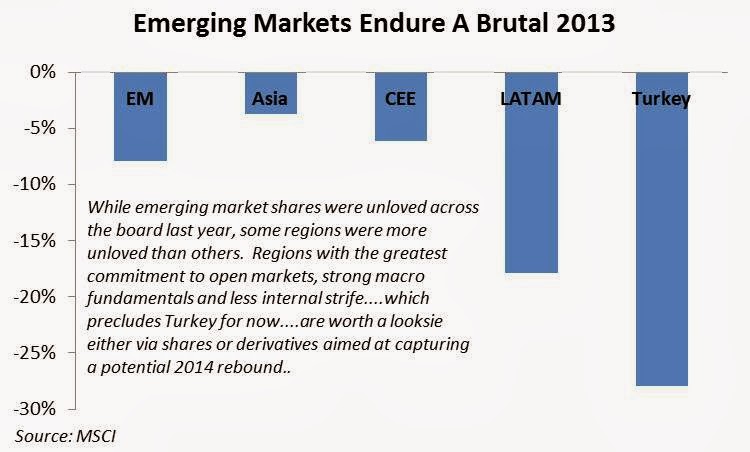 Countries whose solid fundamentals are at odds with the lousy performance of 2013 offer up an assortment of securities ripe for the picking.  Accessing these through derivatives is more complicated as the many markets lack the range of products available in developed markets, and when they do, liquidity and volatility come into play. Still call options on unloved ADRs of emerging market listings could be attractive as well as derivatives on currencies whose underlying country has attractive fundamentals.

Gold??
No discussion of hedging portfolios would be complete without mentioning the default hedge…at least according to those apocalyptic cable-TV commercials: gold. When global central banks unleashed an array of extraordinary measures to stem the financial crises of the past six years, many warned of runaway inflation and the diminishment of the dollar. Dialing up one’s exposure to the yellow metal, was considered an antidote for both scenarios. Indeed, gold prices did broach $2,000 per ounce in 2011. Since then, however it has been a steady slide. The truth is that despite unprecedentedly loose monetary policy, the problem with inflation is that there is still not yet enough of it, at least in the U.S. and Europe. Consumers have not yet been cajoled into liberally opening up their purse strings. Only the Japanese have been able to exert upward pressure on prices, with headline inflation reaching levels not seen since 2008.  So if one seeks gold for near-term returns, purchasing it denominated in Yen would be the method of choice. This tactic would do nothing however to protect dollar-based investors from inflation, especially as the Yen decreases in value vis-à-vis the greenback. 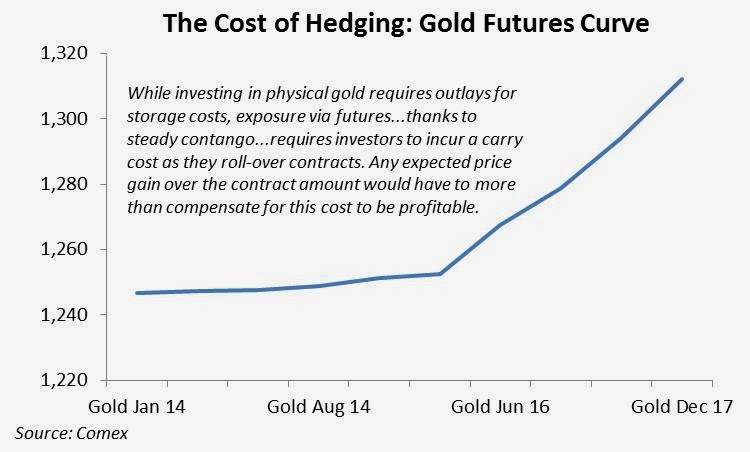 So while it is not necessary at present for U.S. and European investors to utilize gold as an inflation hedge, it can still act as a defensive component in a diversified portfolio. This is especially true should the recent decline near the marginal cost of production of gold miners and the lower prices spurs activity among a key segment of physical users: Indian jewelry buyers.  Yet buying physical gold incurs costs, namely secure storage. If investors gain exposure via futures, they will get tagged with the costs of rolling over these contracts upon expiry. This negative carry is indicative of futures curves in contango, which is the opposite of the curve exhibited by many commodities (and interest rate futures). Any rise is gold prices would have to be large enough to offset this cost.
Posted by Rob Morrison at 12:54 AM