Bonds: Why Stick Around?

As has been the case of late, financial markets this week have largely been driven by macroeconomic developments, namely the confirmation process of Janet Yellen as Chairwoman of the Federal Reserve and the release of the minutes of the Fed’s most recent meeting, which to no one’s surprise, focused on the timeframe for tapering its $85 billion in monthly bond purchases. It is said that the bond market presents investors with asymmetric risks: a limited upside of par value, and a downside of zero. Never has that adage been truer. The Fed’s massive support of the bond market, which has gone on for years, cannot last forever, lest the U.S. wants its monetary policy to drift further into banana republic territory. While Fed officials hoped that an exit would be triggered by an economy sufficiently growing to stand on its own, the opposite may be true. Low interest rates have not catalyzed a debt-driven growth spurt (since it was such a good idea the first time), and the crowding out of bond investors into other asset classes, such as equities, has not created the consumer-driven wealth effect that for better or worse…..well, for worse….has become the primary engine of the U.S. economy over the past decades. With every passing quarter of subpar growth, Fed officials, in the shadowy corners of their conference rooms, likely lament the diminishing returns of their various incarnations of quantitative easing, but fear what will occur once the proverbial punch bowl is removed.

Officials got a taste of that this spring when the subject of tapering was initially broached. The 10-Year Treasury sold off with borderline ferocity as yields climbed from below 1.7% to nearly 3% between May and late August. 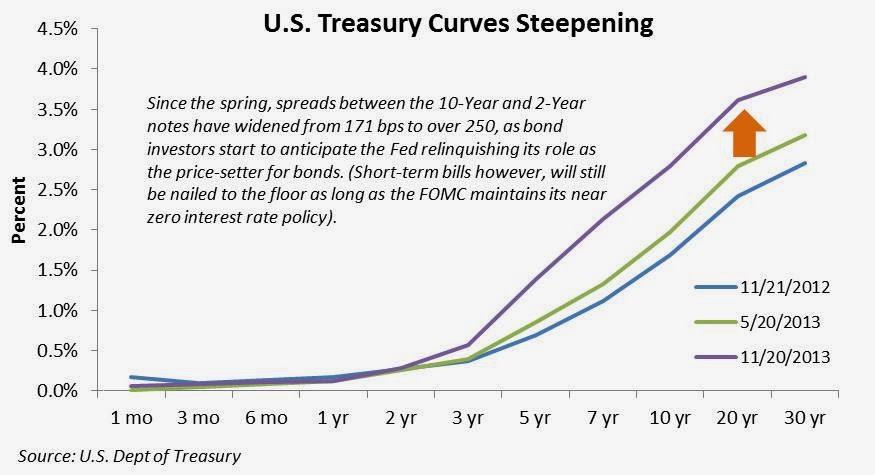 The bear-steepening… in investor parlance…of the yield curve, as illustrated above, usually occurs when Treasury prices decline in the face of higher economic growth prospects, which leads to juicier returns in asset classes more attuned to the business cycle, or the expectation that inflation…the bane of bond investors…will eventually rear its unappealing head. The latter often accompanies the former. Yet neither rock-star growth nor incipient inflation is currently present. The sell-off in the 10-Year is simply the manifestation of investors recognizing that eventually the elephant on the bond-market trading floor will tip-toe towards the door, and when that occurs, no one wants to be the last one exiting the trade. 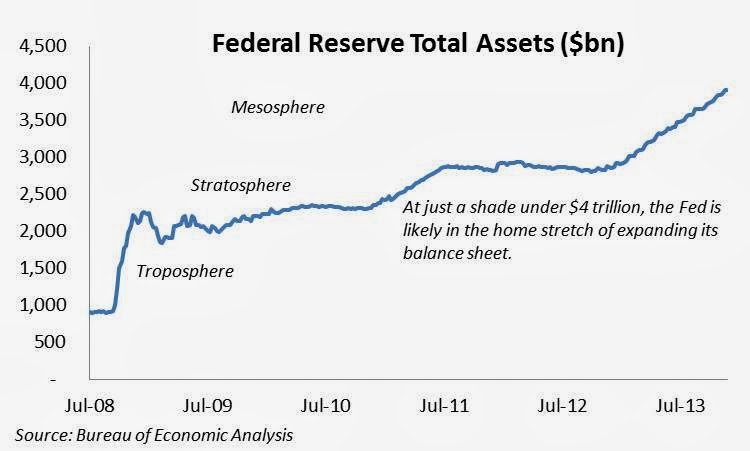 One might ask that if low-growth and limited inflation usually provide support for the bond market, wouldn’t the post-tapering climate still be favorable for Treasuries? No, and for two reasons. This discounts the massive role the Fed has played as the marginal buyer (that is the price-setter) of Treasuries in the wake of the financial crisis. Secondly, in “normal” periods of lackluster growth, Treasury yields have been higher than this chronic 2-3% range, meaning that at best a slight sell-off would be inevitable. In fact, as seen below, in the year succeeding the exit from the Great Recession, yields on the 10-Year averaged 3.5%, a level not seen since April 2011.  If that level signifies mean-reversion, then a small sell-off in Treasuries would be expected. More likely, investors will freak out and the carnage would be much worse. 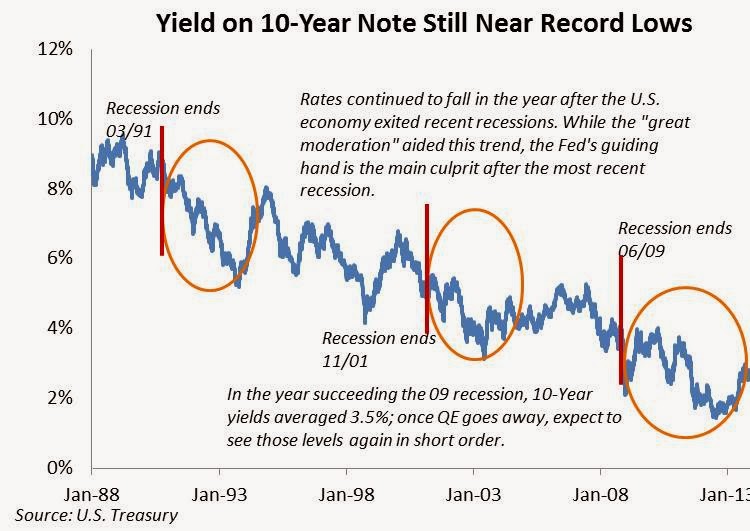 A Golden Age for Corporate Refinancing
High quality corporate bonds have followed suit.  Investment grade corporates as illustrated below by the iShares Investment Grade Bond ETF (LQD) have had a strong run ever since the announcement of QE2 in autumn 2010, rising 26% until hitting its peak earlier this year. It sold off 6.5% during this spring’s taper talk and has clawed back only a portion of the lost ground. 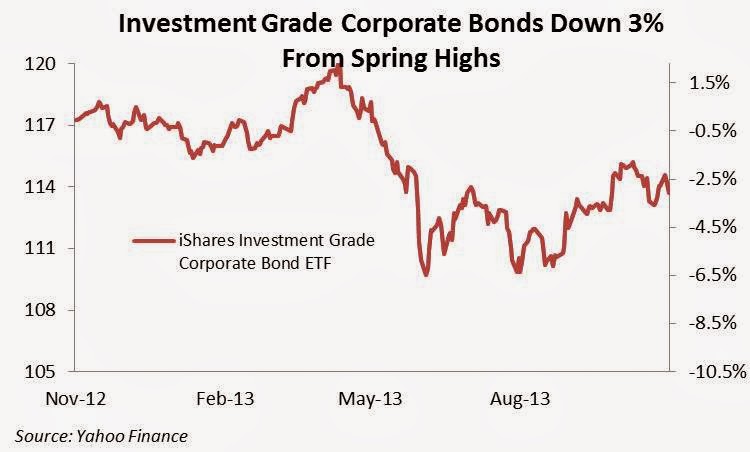 The reason for the fear is simple bond math. With borrowing costs at record lows, every high-quality corporation with a CFO worth his or her salt refinanced existing debt, locking in low rates far into the future. Bond investors, many of whom have constraints on the types of securities they are allowed to purchase, had little choice but to accept such meager yields and snapped up the flood of new issuance. We call this getting suckered. Yet the hunger for yield is still there, and once rates rise, new bonds at that time (assuming there are any investment-grade firms who’ve yet to lock in rates) will offer more attractive yields vis-à-vis what is already present on the market. The result will be lousy liquidity and principal values falling like rocks to compensate for pathetic coupons.

Junk bonds have fared better over the summer. The iShares High Yield Corporate ETF (HYG) is just below its post-crisis high, reached this past spring. Historically, movements in the junk bond market are more attuned to other risky assets such as equities, whereas investment-grade bonds take their cues from Treasuries. As seen below the trajectory of high yield bonds have roughly tracked gains in the S&P 500 since 2010, but rising only 27% compared with 49% for shares. 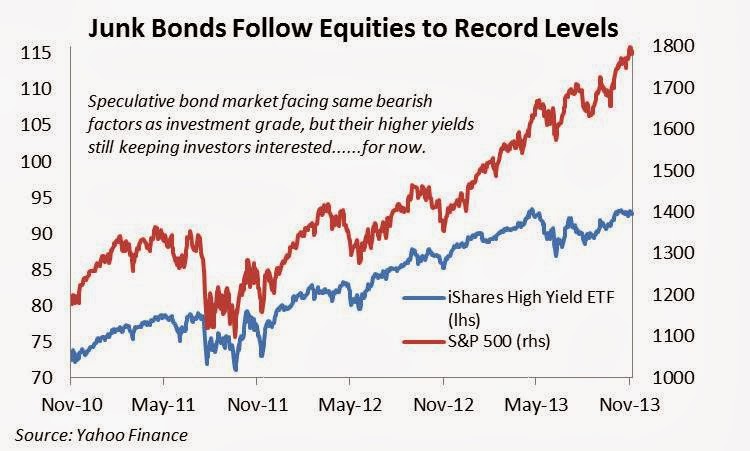 The chart below tracks the spreads between corporate bond yields and treasuries. It illustrates not only the more volatile nature of junk bonds, but also shows that spreads over the past few months have narrowed slightly more than they have for higher quality instruments. Counterintuitively, if fears of disruption are slowly seeping into bond markets, investors may be willing to hold onto the higher yielding securities, having decided the low yields on the investment grades simply are not worth the risk of contending with a Fed pullback. 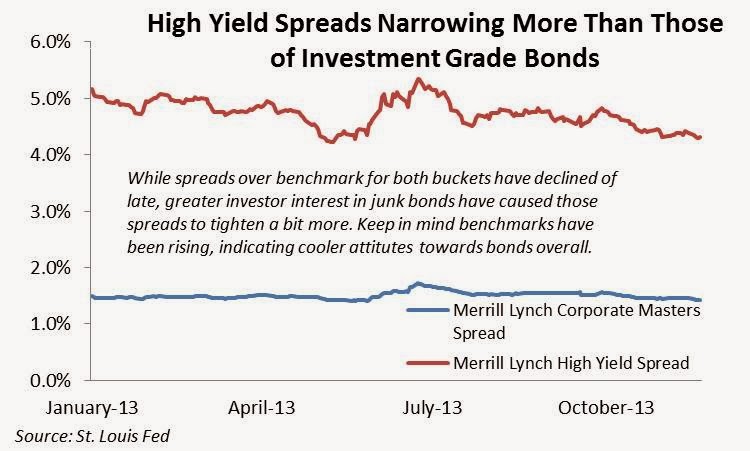 So why not pile into equities? Everyone else has of late. After all, share prices are supposed to be forward-looking, and if one is to believe that elusive GDP growth rates greater than 2% are just around the corner, he can be rewarded for his optimism in the resilience of the American consumer. More cynically, if the Fed is in the business of creating asset bubbles, we may as well profit from it despite the bizarre combination of record highs on major indices and a consistent string of forgettable earnings growth. Until the iceberg incident, the champagne flowed freely and it was one hell of a party on the Titanic. 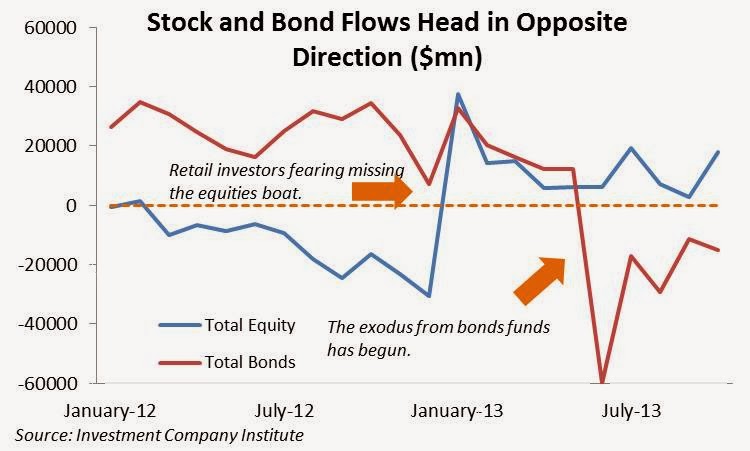 “And What Was That Headline Jobless Number?”
Given the Fed’s prepping of the battlefield by repeatedly referencing tapering, it is likely that its balance sheet is nearly maxed out and bonds have hit their high water mark. Yet this summer’s minor pullback would have been much worse if the underlying economic data had not been so dismal. The Fed has hung its hat on an unemployment rate of 6.5% as the point at which it may consider dialing back its extraordinary measures, yet that too has come into question with hints of a lower threshold of 6% being bandied about. It remains questionable why the central bank has put so much emphasis on a number emanating from the employment population survey, which is notoriously less reliable than the more rigorous establishment survey. Yet even within the population survey, this headline rate is arbitrary at best. The all-in jobless rate, including those who are working part-time for economic reasons as well as discouraged workers is still 13.8% compared to the (fictional) 7.3% headline number. 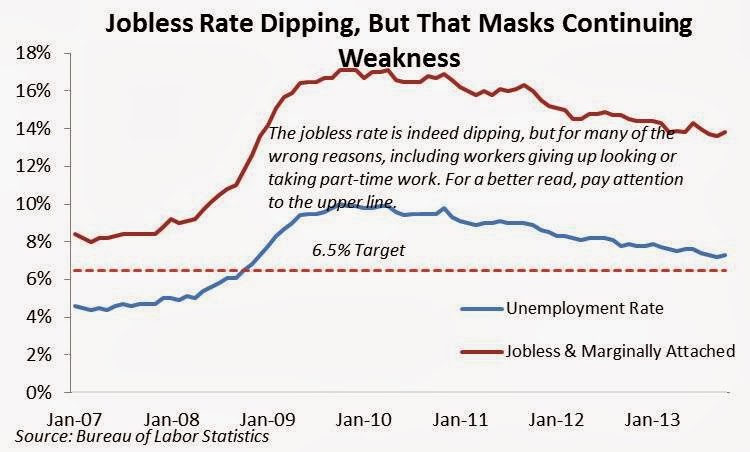 Other data series, such as the Labor Force Participation Rate and Employment to Population ratio are equally depressing. Yes, these multi-decade lows are partially driven by demographic trends, but the reality is that the U.S. jobs market is well below its pre-crisis trajectory, sapping skills, motivation and consumption from the overall economy. Given such a backdrop, even if the Fed does start tapering (due to its ineffectiveness, not the opposite), bonds, especially shorter-dated maturities, will likely find support in low Fed Funds rates for years to come. That said, we have likely seen the highs of bond prices, especially those with longer maturities. 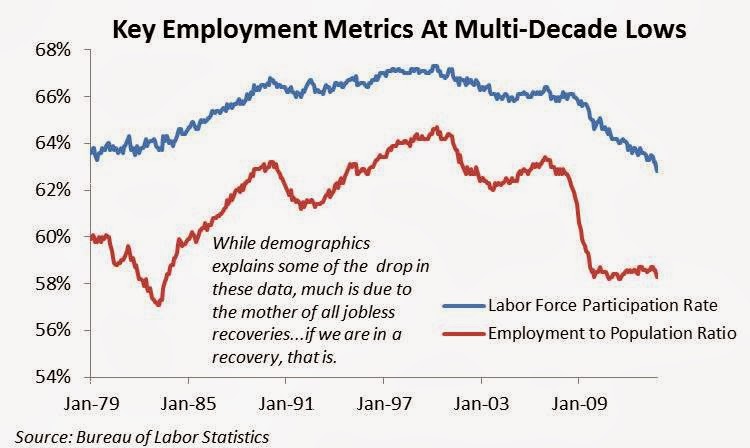 Inflation: Not There When We Actually Need it
Weakness in the other leg of the Fed’s dual mandate…inflation…has also caused the slide in bond prices to be more muted than it otherwise would have been. Low interest rates were supposed to have ignited economic growth, thus causing a welcome upward push in prices (more on that below). The opposite has happened. September’s reading for core inflation, using the Fed’s favored gauge is a paltry 1.2%, well below the recently-elevated acceptable level of 2.5%. 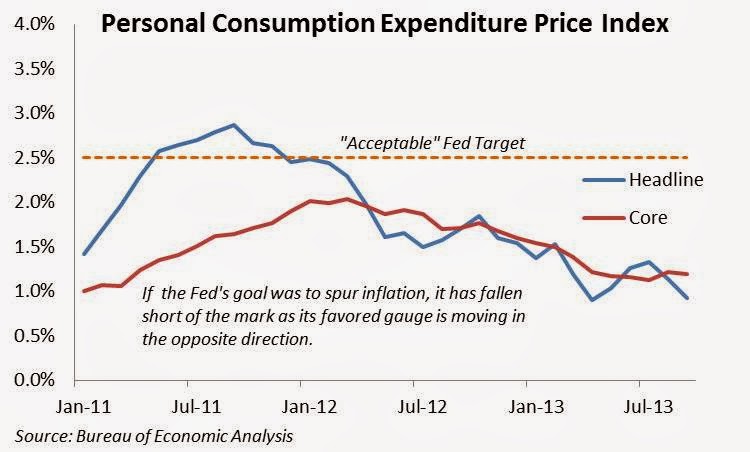 Why attempt to cause a spike in inflation? Not only does it signify a robust economy as firms are able to raise prices (and perhaps wages…thus creating a virtuous circle), but also because in a highly-leveraged, advanced economy, the opposite phenomenon….deflation….is a frightening scenario. If consumers expect prices to decline further, they put off purchases, further weakening the economy.  Inflation, or lack thereof, also plays an important role one a consumer’s willingness to save. What’s important in lending and borrowing is real interest rates: that is nominal rates minus inflation.  If one can stick money in the bank and earn a respectable real rate, they will be incented to save. The first scenario in the chart below illustrates that. The second chart is analogous to what the Fed is presently attempting to achieve. If it manages to keep rates low (to encourage corporate borrowing) and goose inflation, real rates will turn negative and consumers will opt to spend rather than lose money over time. The final scenario shows the negative impact of deflation. By subtracting a negative number, the real rate increases, thus causing a logical person to save. Not what a tepid economy needs. 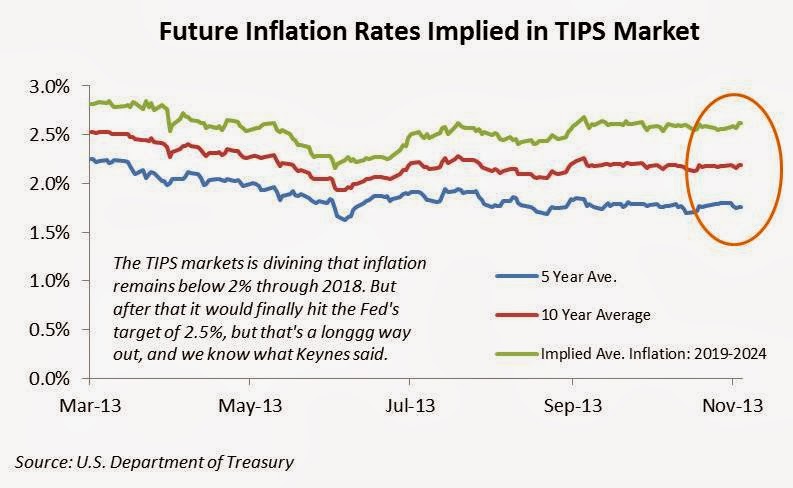 Missing Growth And Disjointed Capital Markets
The above data reflect pervasive weakness in the U.S. economy. Recent GDP trends further illustrate this. Yes, Q3 growth came in at 2.8%, but much of that was attributed to inventory build-up. Using a measure that more directly gauges domestic spending appetite, the environment appears more tenuous, with final sales to domestic purchasers notching sub-2% gains in three of the past four quarters. 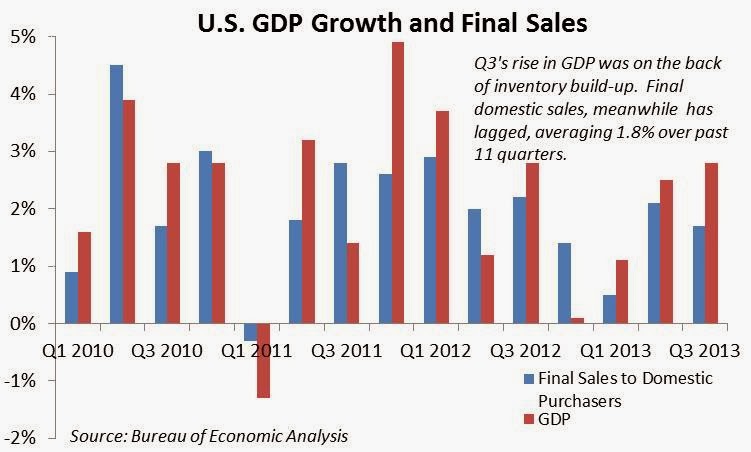 Tapering is probably around the corner, regardless of a lethargic economy. Slow growth won’t be enough to cause investors to pile back into the safety of Treasuries. Over the past four years they have become so addicted to the Fed’s largesse and taking cues from the macro-picture, that many pros have likely had their skills in investment fundamentals atrophy. That said, some savvy portfolio managers have already begun to dial back bond exposure. What to replace it with in one’s portfolio is an entirely different…and equally complicated….question. As has been the Fed’s goal, its moves in the bond market have led to distortions across the investment universe. The sad irony is that such policy-driven distortions in financial markets have clouded the outlook to such a degree that what is usually a competitive advantage of the U.S. economy….its capital markets…has now become yet another source of trepidation. Rather than providing fuel for productivity-inducing, long-term investment, one can look at current record levels and plausibly say “bubble.”
Posted by Rob Morrison at 10:21 AM