Some Rays of Light in Recent Data, But a Change in Course is Still Needed

On Friday the Dow closed above 14,000 for the first time since autumn 2007, a number as equally inconsequential as last Friday’s 1,500 close on the S&P 500. That is not entirely true. Such easy to digest, round numbers do tend to grab headlines and, at least for a few fleeting moments, draw the nation’s attention away from Super Bowl prognostications and the latest reality TV courtroom drama, shifting it instead towards the ostensibly esoteric world of financial markets. Evidently markets have been on a greater number of people’s minds lately. Preliminary data from the Investment Company Institute show that in January there were net positive cash inflows into equity funds for the first time since February 2012. U.S. equity funds saw their first net inflows since early 2011. An 11.7% rally will do that. Especially as the trauma of late 2008 slowly fades into memory and side-lined investors realize they’ve missed out on the doubling of benchmark indices since the bear market’s nadir.

It is telling that markets maintained these highs during a concentrated period of relevant economic data releases. Granted the main ones, GDP and employment, are lagging data….showing us where we’ve been rather than where we are heading…., there were enough details heading in the right direction for optimists to latch onto.

GDP: Oh, What a Long (Long Long) Strange Trip It’s Been
Despite the initial grimaces, investors quickly brushed off the U.S.’s fourth quarter GDP slide of -0.1%. Much of the headline figure is attributed to a surprise reduction in federal defense outlays and a large drop in business inventories. The latter is of interest because it shows that even in this dud of a recovery, rather than steadily plodding along at a stable trajectory, the economy is still subject to the vagaries of the business cycle. Optimistic corporate planners overshoot production one quarter and must draw down these excess inventories during the next rather than keeping the assembly lines humming. That is evidently what occurred in Q4. Despite the inventory reduction, a key component of business spending…investment in equipment and software…registered strong gains. More importantly, so did personal consumption (this would be you and me), which alone contributed 1.5 percentage points to growth (meaning the other buckets combined were net negative). More on these items later. 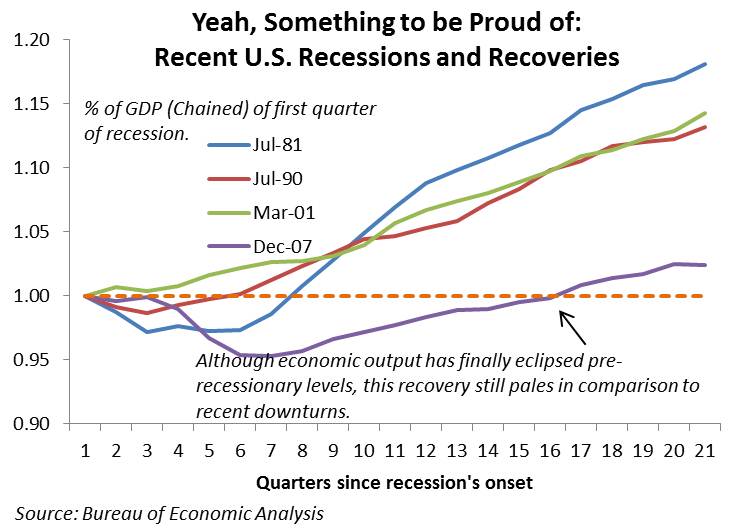 As seen in the chart above, in December 2011 the economy finally exceeded its pre-recession level. It took a painful sixteen quarters to achieve this, substantially slower than other recent recoveries. Aside from the obvious sluggish pace of growth, the other concern is the consistency of it. There was no post-recessionary bounce of pent-up demand seen after other downturns. Then again, those surges were largely fueled by easy credit and an overreliance on home construction, two paths we are not likely to venture down again anytime soon (with the notable exception of the federal government and its addiction to deficit spending).

Producing…and Ordering…the Goods That Drive the Economy
Although it comprises only about 15% of the economy, business investment bears special relevance as increases in activity are amplified throughout the broader economy.  This occurs through ramped up hiring and a rise in spending on ancillary services: travel, accounting, stocking the coffee machine, etc. In Q4 a key subcomponent of business spending…equipment and software…rose over Q3 at a 12.4% annualized pace. Over the past four quarters, this bucket has averaged gains of 5.3%. Corporate managers would not invest in new machinery and computer systems should they not have confidence in future growth prospects.

This welcome trend is also evidenced in recent data on durable goods manufacturing. After a tepid first half of 2012, the nation’s factories saw a distinct turnaround last autumn. Of special note is the nondefense capital goods ex-aircraft segment, which is considered a key barometer of business spending. Forward-looking new orders data has turned positive, a good omen for Q1 2013. The robust shipments data for last autumn (see chart below) further validates the concurrent GDP data on equipment and software spending. 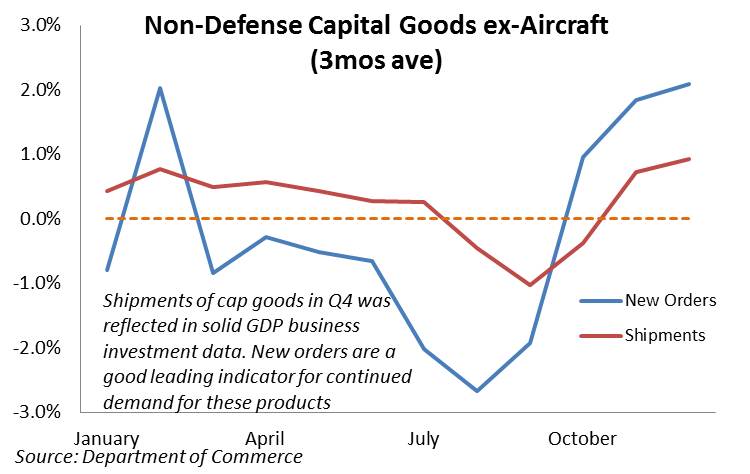 Also included in business investment data is residential home construction. It has been a positive contributor to GDP growth for seven quarters running. But given its diminished slice of the overall economic pie, the segment does not move the dial as it once did. Still double-digit quarterly gains, albeit off of a very low base, in four of the past five quarters are indeed a welcome sign.  The chart below illustrated just what a low base the homebuilding sector is coming off of. Prior to the housing bubble, new home sales averaged just under 800 thousand annually. The pace at the height of the insanity nearly hit 1.4 million. Unlike existing home sales (approx. 85% of the market) in which a buyer may splurge for a new dishwasher or a can of paint, new homes have a strong magnifier effect on the economy. It does not take a Nobel Laureate to realize that 369 thousand new homes require fewer new cable contracts, lawnmowers, home theater systems or trips to Mattress King than do 1.4 million new dwellings. This absence alone, perhaps more than anything else, explains the glacial pace of the expansion. As stated…ad nauseum…a robust housing sector should be a consequence of a strong economy, not the source of it. 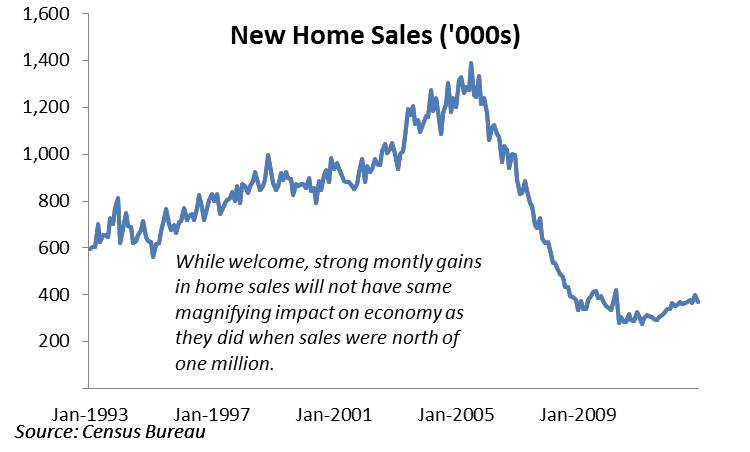 The Consumer: Bruised, Battered, But Still Standing….Well, Kneeling
Implied in the sentence above, the main conduit for a supersized housing bubble to drive the entire economy was personal consumption, which constitutes 70% of U.S. economic activity. Along with business investment, this bucket was a bright spot in the Q4 data. Personal consumption rose 2.2% for the quarter. Not searing heat by any stretch, but it has outpaced overall GDP for the past three years, averaging 2.3% quarterly growth versus 2% for broader economy. A fair warning though, the pace of consumption has slowed down over the past year, largely due to 2010 and 2011 being the beneficiaries of low base effects from the crisis.

Another ray of light can be found in consumption of durable goods having risen nearly 14% in Q4, keeping up its recent strong pace. Often such purchases are financed with credit, and as with business spending the confidence of consumers to take on such commitments is a sign of optimism in future economic prospects. 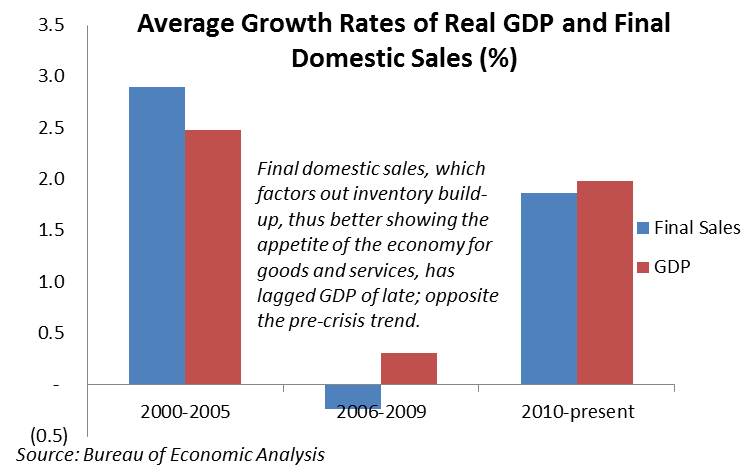 The Jobs Report: Good, But Not Good Enough
Along with less access to credit, the other reason why the American consumers’ innate ability to shop until they drop has yet to kick in is the continuing lethargy in the jobs market. Friday’s jobs report, while not disappointing when observed in a vacuum, indicates a pace of hiring nowhere near what is necessary to absorb back into the labor force the remaining 3 million workers who’ve lost their jobs during the crisis. The 157 thousand monthly gain in nonfarm payrolls is at the upper end of what is necessary just to keep pace with population growth. In order to make a real dent in the 7.9% jobless rate (14.4% when including discouraged workers and part-time bouncers at dingy bars who’d prefer to get their jobs in corporate sales back), the economy would need to create jobs at a much faster rate. A back of the napkin calculation shows that to absorb the 3 million “official” jobless along with new-entrants (and blatantly ignoring discouraged workers), the U.S. would need to average 214 thousand new jobs every month between now and the end of the current administration’s tenure. Of course not hitting that target will assuredly be blamed on the prior regime. 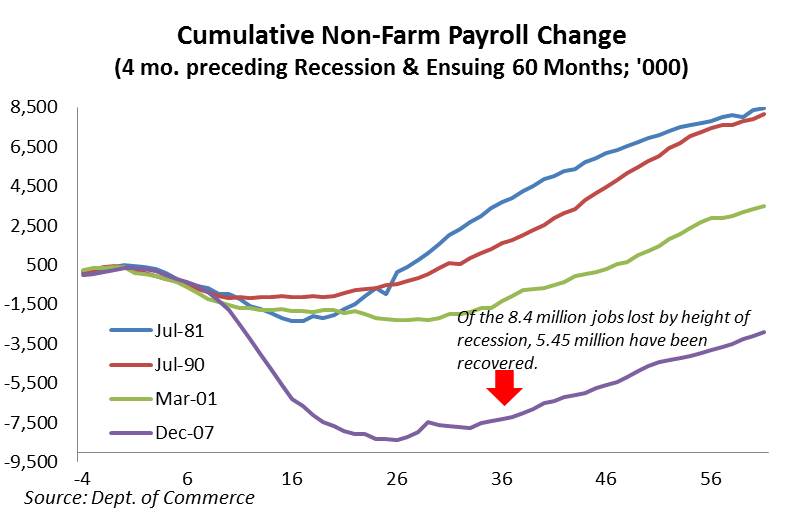 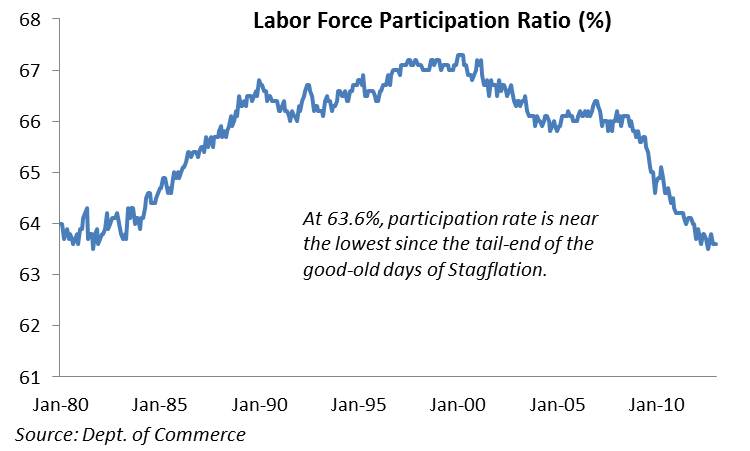 A Change of Direction……Please?
Apologies for the last line. This forum is not the setting for snide political comments. What is fair game, though, is the recognition that without a change in economic policy that puts a premium on catalyzing growth, private enterprise and job creation, the lame trajectories seen in the above GDP and jobs charts will likely not change. That translates into lost potential that possibly may never be recovered. The laundry list of obstacles in the way of what is historically the American model of free enterprise has gotten immense. Payroll taxes this year, major components of Obamacare kicking in the next, and increasing government oversight in the financial sector and anything touching the environment. Regulation of this type is indeed necessary. But as with anything concerning governance, one must recognize the trade-off between excessive regulation and the need to grow the economy. The evidence shows that the U.S. certainly has not had enough of the latter in recent years.