On Friday the S&P 500 closed above 1,500 for the first time since late 2007. Furthermore it is only 4% below its record high of 1,565 set during that same quarter.  Although 2012 experienced two sizeable dips, large-cap stocks have gained a laudable 14% over the past year, with the current rally…kick-starting in mid-November…pushing shares up 11% alone. Equities reaching such dizzying heights merit some scrutiny. Is the rally on sound footing? Given that stock prices are forward-looking, does the advance bode well for the underlying economy’s growth prospects? Or is this simply the result of a convergence of algorithmic trading programs bidding each other up with no fundamental underpinnings other than the remaining fumes of the three-year QE rally? 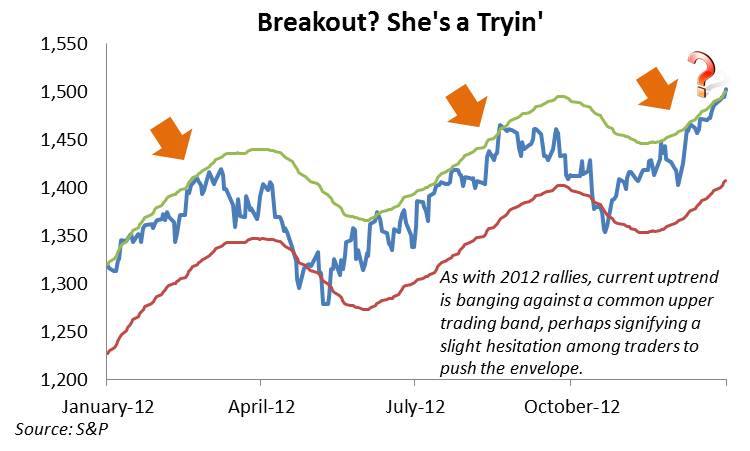 To get better insight into where shares…and the broader economy….are headed, it is necessary to peel back the onion a layer or two and examine the performance of key sectors and appendages of global equity markets. In many respects, signs point in a positive direction. Whether that will translate to the rally being sustained through much of 2013 and the U.S. economy taking a turn for the better remain to be seen.

The Sectors Tell the Story
As seen in the chart above, despite the punches thrown at risk tolerance over the past year including the Eurozone crisis, a slowdown in emerging markets and the uncertain outcome (that’s almost funny in retrospect) of the U.S. presidential election, shares have consistently been a winner among major asset classes. If the S&P 500’s 14% YOY gain enables one to sleep soundly, then the sources of that gain should conjure up memories of one’s favorite childhood teddy bear. Given the role it plays as mechanism for efficiently allocating capital to the best use in our highly-levered economy, it is said that rallies must be validated by the participation of the financial sector. As seen below this has indeed been the case with financials far outpacing the broader index over the past year with a 24% gain. Since the S&P’s November trough, financials have beaten the index 15.4% to 11.1%. That’ll do more than its share in pulling up the S&P given the sector’s 16% weight in the index. The next best sector has been consumer discretionary stocks. This sector is in the bucket known as cyclicals, meaning they rally when the broader economy (and market) is expected to do well. As with financials, participation of discretionary shares can be construed as a sign of good things to come, especially in an economy comprised of 70% personal consumption. 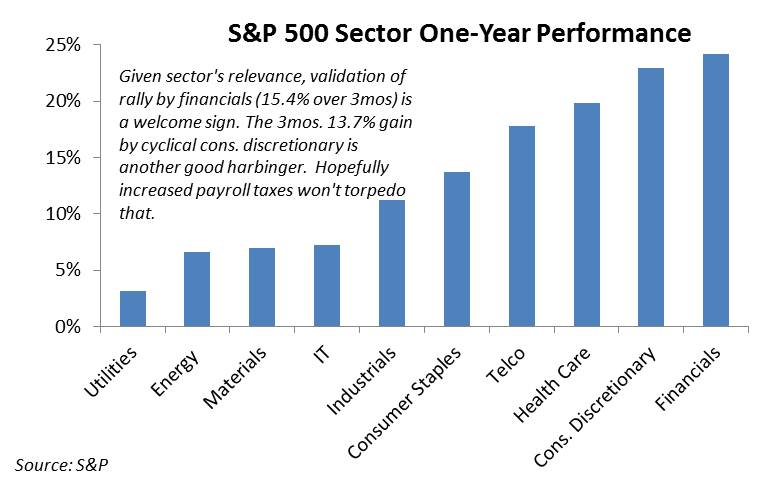 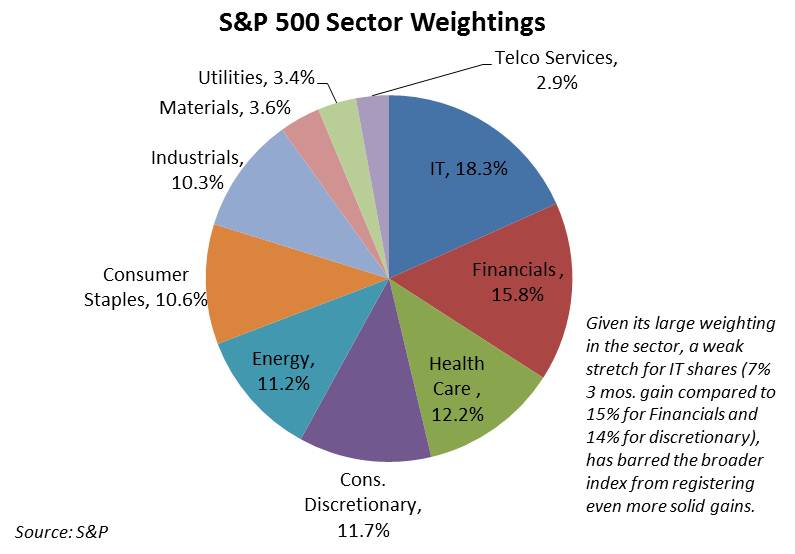 But all is not well. As seen above the sector with the largest weighting in the S&P is information technology. It has been a dog, gaining only 7.2% over the past year with nearly all of it being registered during the current 10-week rally. Investors often pile into IT stocks when they expect corporate investment is about to pick up in advance of robust economic growth. The fact investors are relatively cool in IT should serve as a red flag. To drill down yet another layer, the sub-index of semi-conductor producers is down 5.6% over the past year. It has rallied 21% since November but still remains 11% below its 52-week high. Given that one cannot brush his teeth or flip on a coffee pot without interfacing with a computer-chip, investors’ expectations for this sector are considered especially relevant tea-leaves for a 21st century economy. Despite their ubiquity, many components of the sector are wrestling with how to gain greater exposure to the mobility revolution and the higher-margin products fueling it compared to the essentially commoditized personal computing segment. 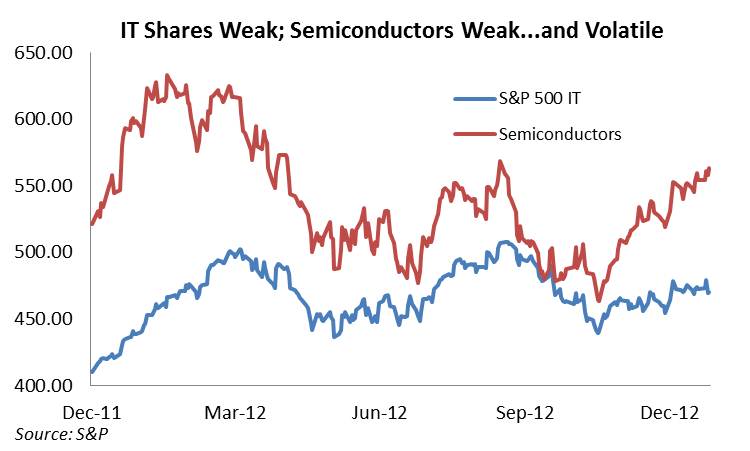 To go old school, another putatively forward-looking sector is transportation. Makes sense. In order to buy cars, overpriced coffee makers and poorly-made Asian clothing, those goods have to get to local stores somehow. Equally important, industrial inputs and energy products such as coal (until it’s outlawed by the current administration) have to get shipped to the nation’s factories and power plants. On a good note, transportation stocks have strongly outpaced the broader market, rising 23% during the current rally. Further adding oomph to the gains is the fact that defensive sectors including consumer staples (7.9%), utilities (7.4%) and telecom (3%) are all lagging the broader market. Healthcare, lumped in the defensive bucket as well, has matched the S&P 500 since mid-November.

Casting a Wider Net….And Coming Up with Some Nice Fish
One must keep in mind that the large-cap S&P 500 is a globally oriented index, with nearly half of revenues coming from beyond U.S. shores. Therefore improved sentiment for global growth may result in confidence in U.S.-listed stocks even if the domestic outlook remains lukewarm. This may indeed be the case as there is evidence that the unsettling slowdown in emerging markets may be turning the corner. Just last week a key barometer of Chinese growth (the HSBC PMI) rose to a two-year high. After plummeting last spring on growth concerns (and broad risk aversion thanks to the EU-crisis) emerging market shares have rallied 21% since their 2012 bottom. As seen below, they have essentially matched the recent gains of the S&P 500. 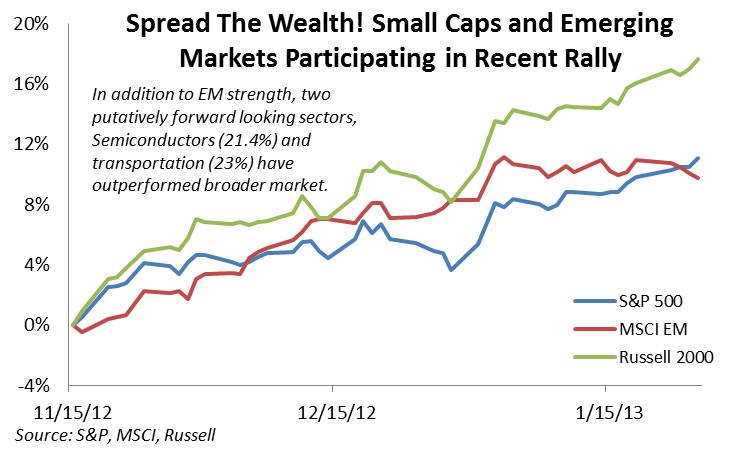 Back to the U.S., the Russell 2000 index is considered the benchmark for small-cap stocks, meaning the smallest 1,000 companies in the broad Russell 3000 index. Small cap stocks are more domestically focused than their larger cap brethren and also more geared towards the peaks and valleys of the business cycle. As opposed to the S&P 500, the largest sector representations in the Russell 2000 are financials, consumer discretionary and industrials, all of which have a pro-cyclical bent. Robust gains in this index would therefore be a promising gauge for optimism regarding the U.S. economy. Also, given the more volatile nature of small-cap stocks, an increase in investor appetite for these shares may serve as validation for gains in the broader market. Then again, it may simply be a case of the Fed forcing investors into any source of yield. Ever the pessimist. Whatever the reason, the Russell 2000 has posted a nearly 18% gain since November. We shall see if investors remain bullish on small caps once 2013 economic data begins to roll in. Of special import will be shifts in consumption in light of the payroll tax hit most of the country is presently getting walloped with. At present the Federal Reserve projects GDP growth to fall within the 2.3% to 3% range. Analogous to a souped-up hot rod, it ain’t.

Speaking of Red Flags
It would be frivolous to draw any conclusions with the still young Q4 2012 earnings season. Standard & Poors currently estimates Q4 earnings to come in at $25.18. Should that occur, it would be a 6.1% year-on-year gain. A sputtering figure like GDP, but at least it’s better than Q3’s 5.1% YOY dip. For full-year 2012, the earnings expectation is $98.85, a laughable 2% gain over 2011. Optimists can take heart in the fact that 2013 estimates call for $112.49 per share, or a 14% YOY gain. Yet another word of caution…and as seen below….that estimate has been trimmed 4% over the past six months. Q4 2012 and Q1 2013 forecasts have taken similar haircuts. 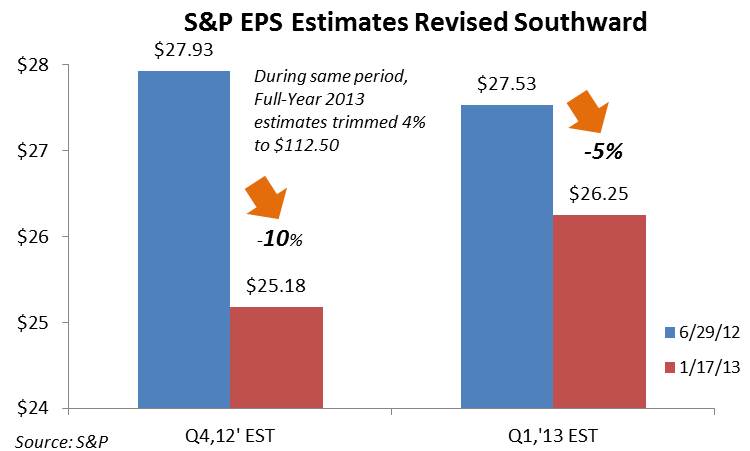 So despite solid performance from key forward-looking segments of the stock market, future gains…and an accompanying boost to the economy…are no sure thing. The post-recession surge in pent-up demand never occurred and the current trajectory is so fragile that the Fed is willing to mortgage $3 trillion (i.e. our children’s future) in an effort to ensure it won’t slip into another recession, or worse, a deflationary spiral. Should the global economy (ex.U.S…..and obviously Europe) improve, large cap stocks may continue their nice ride. Small caps and domestically-focused sectors may not be so lucky. The coming string of macro data…employment, manufacturing and consumer confidence to name a few…will show whether the market has indeed presciently forecast better times ahead or has simply risen on misplaced investor optimism and Fed-induced distortions.