A Slide in the Dollar: A Sign of Confidence Or Harbinger of a Grim Future?

When scanning financial markets data looking for any curveballs that the nascent year may have thrown our way, one’s eyes tend to hone in on recent moves in the currency market. What stands out is how the beleaguered Euro is now worth $1.33, its highest level in nearly a year.  This rise stands in contrast to market forecasts predicting the EUR dipping against the USD over the course of 2013. In truth, the move began last summer with the ECB’s July statement that it would do “whatever it takes” to ensure the survival of the single currency. Since then, the USD has lost 9.3% of its value vs. the Euro. In dealing with these two flawed….in the macroeconomic sense….currencies, one must decipher whether it is an issue of EUR strength or USD weakness. To partially answer that, we can look at the USD index, which is based on a basket of currencies from six major advanced-markets. During the same period this index (DXY) has dipped 4.7%, granted much of it owing to the EUR’s large weighting within the basket. 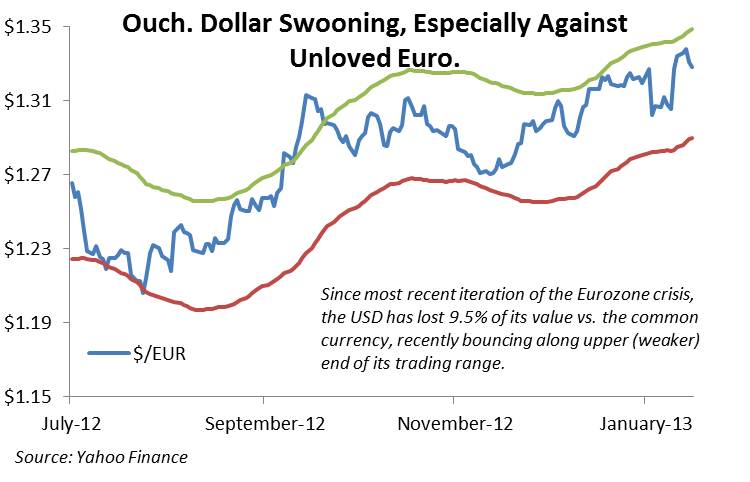 All of this is likely a bit abstract for those not chained to a trading terminal and espresso machine the whole day. But such movements in the FX market provide insight into a country’s economic condition and also give clues on developments in other asset classes such as equities and government bonds.

Tossing in the Wrench
In the textbooks, the value of free-floating currencies should be set by a country’s level of trade, demand for its financial products, and investors’ perception of its macroeconomic condition with regard to growth, inflation and interest rates. Of course in extraordinary times all these factors can get overwhelmed by the actions and words of a few high level government and central bank officials.  Mario Draghi’s unequivocal support of the Euro is one example, removing (for now) the risk premium that the currency would eventually vaporize. Only two months later, the U.S. Fed announced QE3 to the tune of $85bn in monthly asset purchases. Not to be outdone, Japanese officials recently gave a serious shout-down to the Yen, which has seen that currency plummet nearly 14% vs. the USD since September and 21% vs. the Euro (since July).  This move has undoubtedly caused elation among Japanese exporters, making their products cheaper on the global stage. The southward drift of the USD has equally ameliorative effects for the U.S. trade balance and also has the added benefit of kicking foreign bondholders in the teeth by diminishing the future value of their holdings. The recent rise in the Euro, has begun to sound alarm bells as more expensive exports would add yet another hurdle to the region’s anemic growth. Austerity has already scarred the economic landscape, leaving trade as one of the few remaining straws upon which to grasp.  Any time there is so much action, real or perceived, to depreciate a currency, the detrimental concept of beggar thy neighbor arises, which inevitably distorts normal trade flows, global economic cooperation and ultimately growth.

High on Its Perch….As in the Past Were Louis XVI, General Custer and Lance Armstrong
The U.S. has had a pretty good thing going for quite a while. That thing is the fact that the dollar acts as the world’s reserve currency. Yet, all good things must come to an end. Not that there is an imminent dollar crisis on the horizon, but the country’s chronic fiscal imbalances are becoming ever harder to ignore. As evidenced by the fiscal-cliff fight (which solved nothing), markets are eager to learn how the federal government can cull its debt ratio of 100% of GDP and better match revenues to ever-growing outlays.  Until now, there has been continued demand for U.S. Treasuries, namely from the buyers down the street at the Fed. The central bank’s purchases are purportedly for kick-starting the economy, but the elephantine balance sheet, which has ballooned to nearly $3 trillion, has lowered interest rates sufficiently to allow the government to finance its obligations on the cheap. Unfortunately, as seen in the second chart, those newly created funds have not found their way into circulation and thus into wages or rising corporate sales. 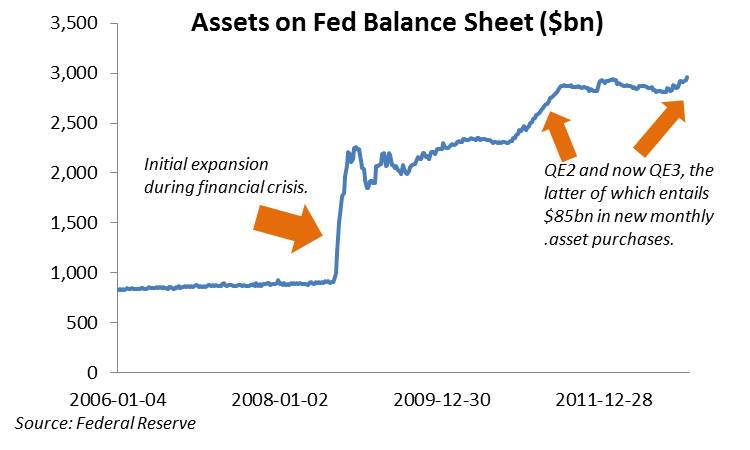 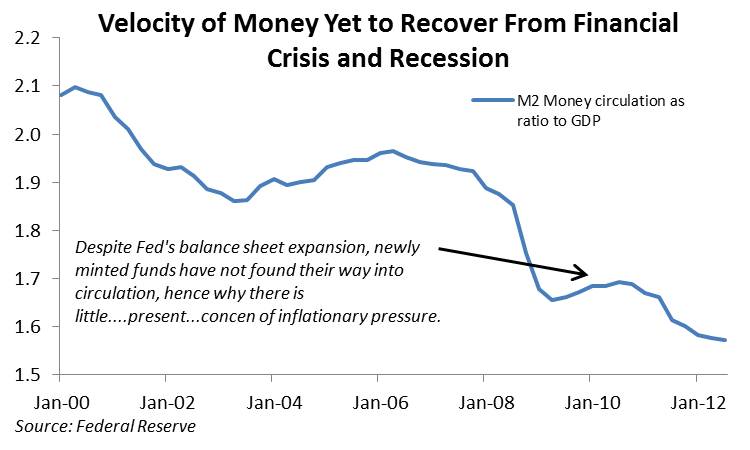 Vacancy at the Safe Haven Resort
Even without Fed intrusion…..I mean participation….in the Treasury market, the U.S. reaps advantages from its position as the world’s largest economy and the role the USD plays in it. If U.S. growth is outpacing other parts of the word, all things being equal, the greenback should appreciate. This is a consequence of the aforementioned demand increase for U.S. manufactured goods and financial assets like equities. Should the global economy (including the U.S) hit the skids, then the USD’s value should….get this….rise in this situation as well. The reason is the role Treasuries play as the world’s favored safe-haven investment. When bond demand goes up in tumultuous times, the dollar follows along, as investors need the greenback to facilitate Treasury purchases.

The table seems set for the latter (sluggish growth) scenario for 2013. Just this past week the World Bank lowered its global growth forecasts to 2.4%, with developed markets registering only a 1.3% expansion and the Eurozone mired in negative territory. As seen below, the IMF, despite a higher top-line number, expects a similar path. 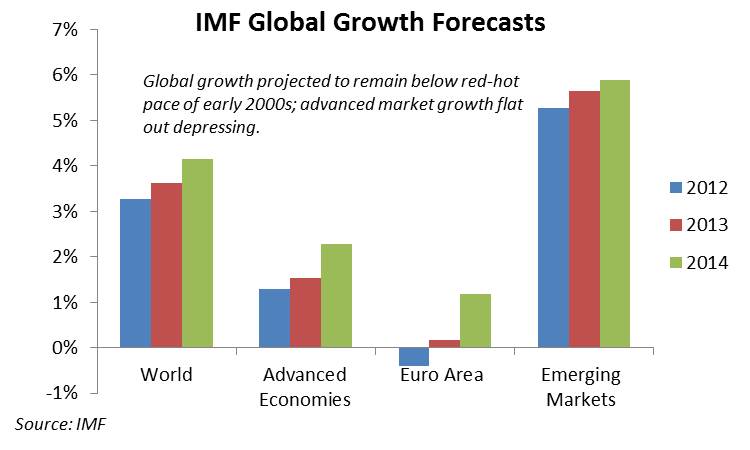 Given the curtailed expectations, it is curious to see the USD lose ground over the past two months (it had rallied on the QE3 announcement through much of the early autumn). Similarly, other safe-haven currencies have sold off of late. The Yen, thanks to Bank of Japan’s asset purchases and stance of the new Abe government, and also the Swiss Franc. After holding its value at CHF 1.20 to the EUR for an extended period (printing Francs to combat appreciation) the currency has now drifted to the lower level of CHF 1.245. As is the case with the other countries, the weaker Franc is welcome news to Swiss exporters. In such a low growth environment, one would be forgiven if he expected each of these currencies to rise. Instead we get a lesson on the power of non-market forces in influencing currency pricing.

Cheap Gas, Pricey Cheesecake
Another slice of economic data hitting the wires this past week, which may cast light on USD movement, is the release of December’s inflation data. As seen in the chart below, the core data (excluding things we actually use like food and energy) drifted south throughout 2012 and is well beneath the Fed’s newly proclaimed comfort limit of 2.5%. The good news continues in the headline number with energy costs, namely gasoline, having receded; the downer is that food costs have advanced three months running. 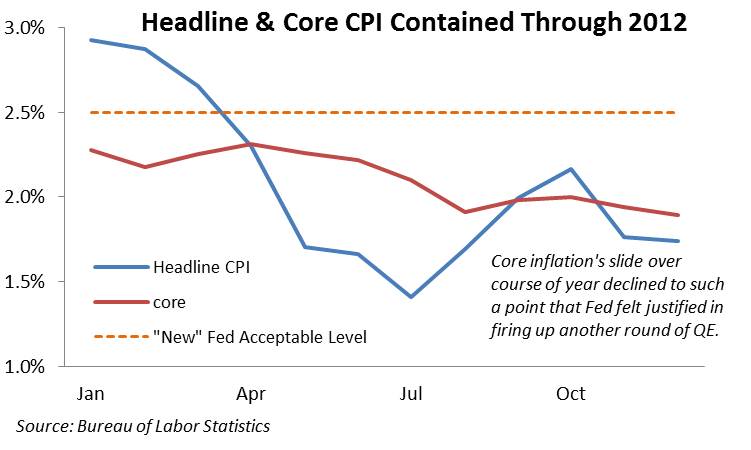 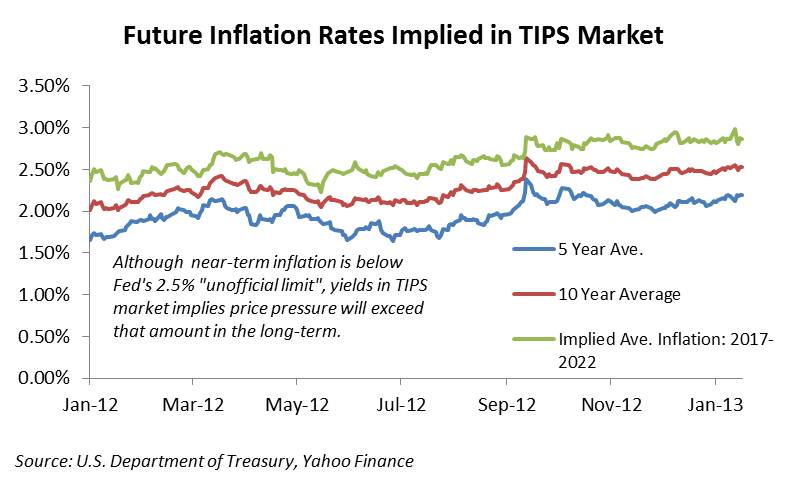 Without upward price pressure, the Fed sees little reason to dial up interest rates anytime in the remote (using the term very loosely) future. And with returns on Treasuries and other USD-denominated assets so meager, it is no surprise that the USD continues to drift lower as higher yielding alternatives are available in the marketplace….much to the chagrin of emerging market finance ministers. At some point, however, such relaxed monetary policy may come back to haunt authorities, especially as the steps identified to sop up excess liquidity remain either untested or, as with the case with raising interest rates, risks thwacking the entire economy. Ironically, rising rates should be USD positive, but if the Fed gets behind the curve on containing inflation, then investors will fear a haircut to the future value of their USD-denominated assets. And during this entire time, as concerns over government finances simmer…..or boil over…..the market will look for alternatives to the dollar. The Euro has eliminated itself from competition for the time being and the Swiss Franc is too illiquid, but more stable, free-floating EM currencies and of course gold, may prove viable choices. 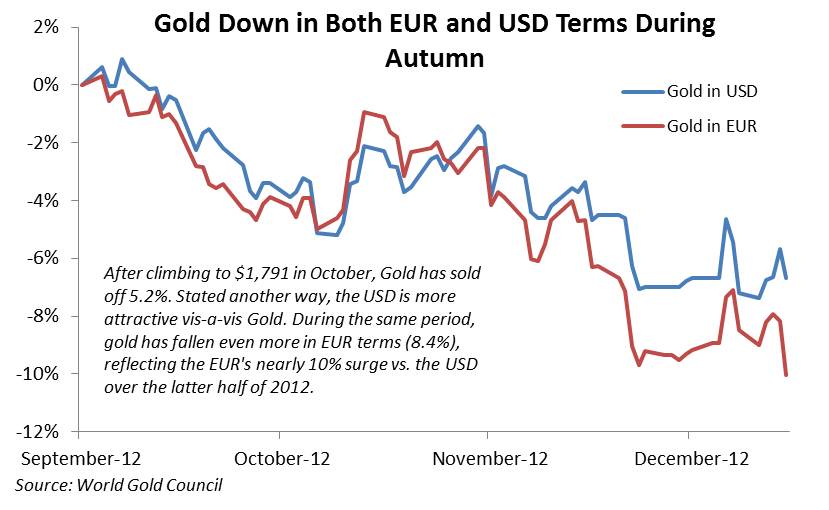 And Gold’s Opinion on the Greenback?
As seen in the chart above, gold in USD terms has dipped 5.2% since the end of September. This is another way of saying that the USD has strengthened relative to the yellow metal, inferring greater investor confidence in the buck. During the same period, the EUR has rallied a more impressive 8.4% vs. gold. With the EUR, this is likely yet another relief rally in its ongoing debt saga. Concerning the USD, given that both it and gold are considered relative safe-havens with the latter acting as an additional hedge against U.S. inflation (USD weakness), the fact that the greenback is stronger in gold terms yet weaker by nearly every other measure reflects a mix of ho-hum global growth, relative stability compared to macro fiasco of the past few years and subdued domestic inflation.

Rotation into Risk, Or Something More Sinister?
It is quite easy to overthink reasons why the USD has dipped of late. One never knows which of the myriad factors has the edge in the multidirectional tug-of-war. Recent weakness may simply be attributed to the fact that risk assets are currently on a roll and the black & white risk-on / risk-off trade may still be intact. In that situation, the USD dips anytime investors dial up their exposure to equities, commodities and the like. On Friday, the S&P 500 closed at 1485.98, its highest level since November 2007 and is only 5.1% off its record high from earlier that autumn. Since its most recent mini-swoon in October, the SPX has gained 9.8%. 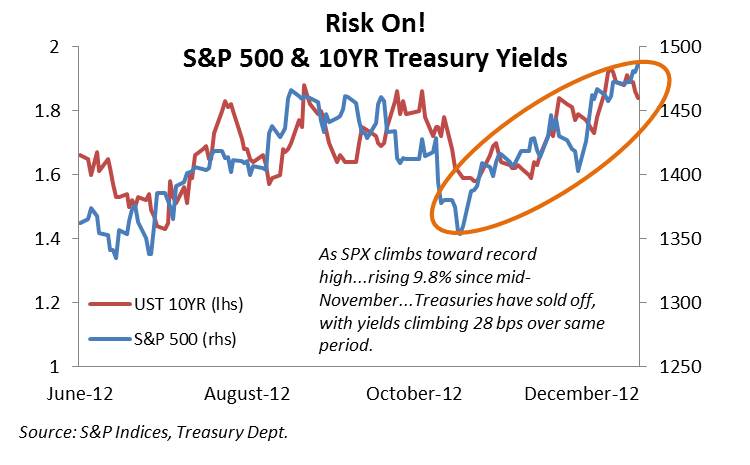 Evidence of the inverse relationship between the USD and shares is illustrated in the chart below. For much of the latter half of 2012, the inverse correlation grew stronger as investors rushed into the USD and out of shares as the one-two punch of the Eurozone crisis and disappointed EM growth dented confidence. 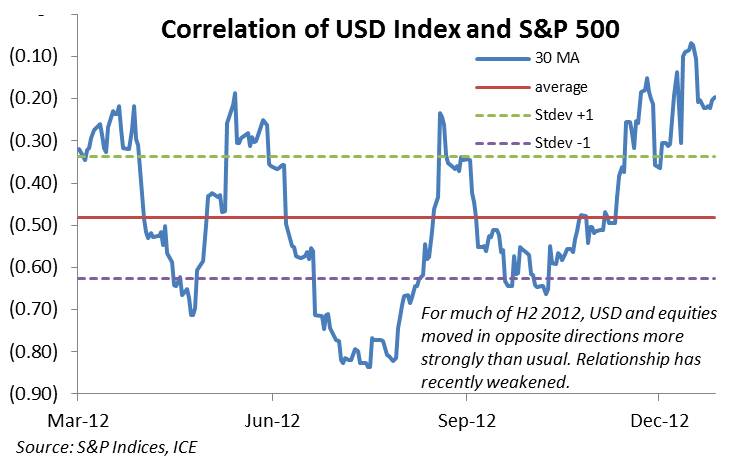 As expected, the recent rally has also seen a sell-off in Treasuries, with yields on the 10-year rising 28 bps since December. The move away from Treasuries and into stocks….with early year investment fund flows finally following along….is a move that would typically be accompanied by a USD sell-off. If that is the case, then great; the Fed’s goal of pumping up asset prices may finally live up to the hype and may even lead to a wealth effect. But as time goes on, without real validation of the policy via higher corporate revenues and improved employment, the potential of these extraordinary measures stirring up inflation may set in stone a more structural downward path of the USD.