2012: A Retrospective…..And Fair Warning for Things to Come.

This being early January, most readers have spent the past several weeks dreaming of which new Apple products were wrapped up under the tree, gorging themselves on holiday food, and then guiltily planning an exercise regimen to work off the season’s excesses. Also, they have likely been inundated with numerous year-end financial market summations and forecasts for 2013.  Rather than simply catalog what factors have driven markets over the past year, this posting will attempt to separate the fundamentals that should impact markets vs. the sway being felt on account of policy initiatives (i.e. market distortions) during this extraordinary period. Lastly, we shall highlight a few potentialities of which investors should be aware during the coming twelve months. True, this is a step short of market calls, but by not getting into the business of forecasting, one can avoid eating copious amounts of crow come next January. As stated, these are extraordinary…and thus volatile…times.

What Happened.
The S&P 500 rose 13.4% in 2012…and has tacked on a few more percentage points in the inaugural week of 2013. Mid-teens returns are nothing to sneeze at. But as seen in the chart below, the ride was anything but silky smooth. It may come as a surprise that in a year which included the uncertainty of a U.S. presidential election, slowing emerging market growth, lackluster earnings and in the final few months, absolute mayhem with regard to the fiscal cliff, stocks managed to register such gains. 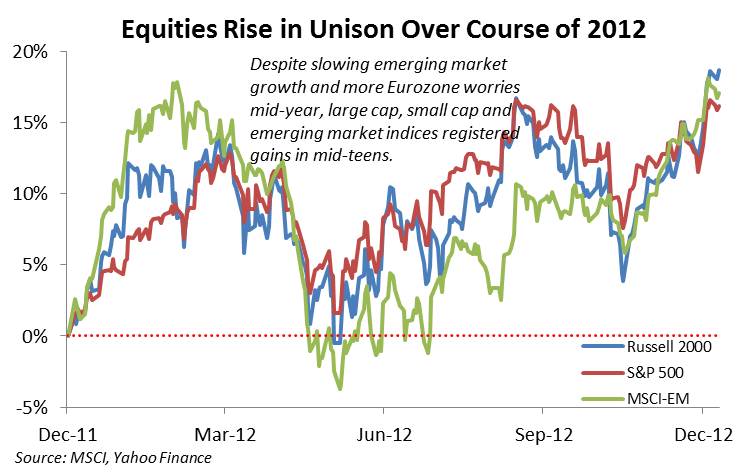 The chart also illustrates how much in lock-step equities moved, with large-caps, small-caps and even emerging markets following similar paths. One may see this as evidence that stocks were the beneficiary of the (partially Fed-induced) binary risk-on / risk-off trade that has hovered over the market since the outbreak of the financial crisis in 2008.  But that would be overlooking a few true strengths currently present in equities.

What Does it Mean?
Stocks can rise for myriad reasons. Two especially compelling ones are cheap valuations and increased profitability. Both are present at this time. When including Q4 2012 earnings estimates, the S&P 500’s trailing P/E ratio is 14.4. Based on full-year 2013 estimates, the forward P/E is 12.7. Both are well below the long-term average.  Despite having expanded 20% since late 2011 (from 11.95), valuations remain relatively attractive. 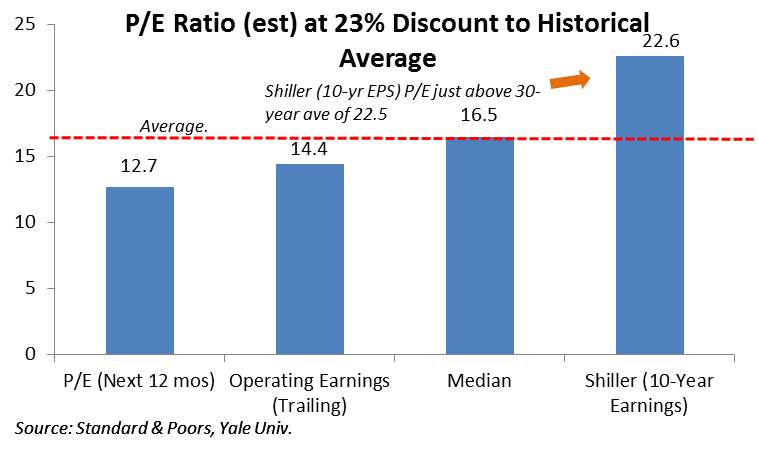 With regard to profitability, corporations are still (miraculously) managing to squeeze margins in order to goose earnings despite weak top-line growth. True Q3 2012 was a major dud, but estimates for the recently completed quarter calls for earnings growth of 7% despite a sclerotic 3% rise slated for revenues. As a consequence, profit margins for many index members are at their cyclical peak. So with regard to equities, it can be argued, a solid 2012 largely reflects positive fundamental factors. That said, I won’t put up much resistance to advocates of the position that part of the 13% gain in the S&P is due to yield-starved investors attempting to seek a home for their money. 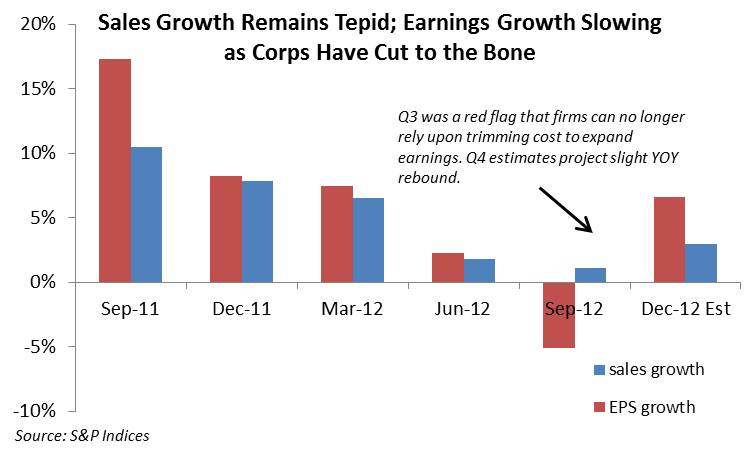 And Going Forward…..
What goes up must come down, and profit margins at this level won’t last forever. That reality is one headwind pushing against stocks as we enter the New Year. The inability of corporations to grow sales is another. By some estimates, S&P 500 earnings will rise 13% in 2013, a marked improvement over 2012’s paltry estimated rise of 3%. Such a gain would almost certainly require a bump in revenues as more cost cutting is analogous to job losses, which risks a downward spiral in a consumer-driven economy.

A serious hurdle to sales growth is the fact that most Americans (not just the uber-rich) are about to get whacked with a tax increase. This is a consequence of the payroll tax…..which is a very regressive variety….returning to pre-crisis levels. In an economy dependent upon the consumer for 70% of all activity, this is no small deal. Once the smokescreen of income taxes for high earners lifts, most Americans will see a tangible chunk of their paychecks missing. This means fewer trips to Western Sizzler, evenings watching Hollywood’s latest mind-numbing blockbuster and six-dollar extra-large frappalicilous drinks, which are one-tenth coffee, nine-tenths artificial flavoring. Hints of the hit to take-home pay may already be evident in consumer confidence numbers, which have dipped considerably after a steady climb through the autumn.

The New Year also holds some potential upside surprises. Valuations may continue to expand towards the historical average. One potential catalyst for this would be jobs continuing to be created at a clip greater than 150 thousand monthly, a level achieved four of the past six months. By increasing the size of the pie, a bump in employment would partially offset the drag of the higher payroll tax.  Improved investor sentiment could also slow down…or reverse… flows away from equity funds and into the bond market; this shift would add much needed volume, thus validity, to the current equities rally. 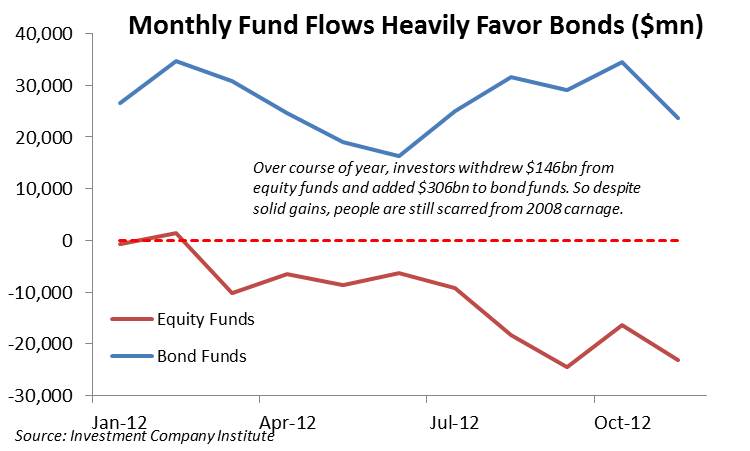 Lastly, shares could benefit by a rebound in global demand, namely from emerging markets, for American capital goods. Such a boost would reprise the wave of manufacturing activity that was a source of strength during the early stages of the recovery, but which has since tapered off.

What Happened.
To the surprise of no one, the Fed extended its bond purchase program known as Operation Twist and when that petered out, announced a third round of quantitative easing targeting not only Treasuries, but also mortgage bonds, which it had previously ceased absorbing. Clearly fearing that even an eventual $3 trillion (I refuse to type out twelve zeros) balance sheet would not be enough to catalyze growth, the Fed also added language stating its intention to keep rates low until joblessness hits 6.5% or when the cows come home, whichever arrives first. 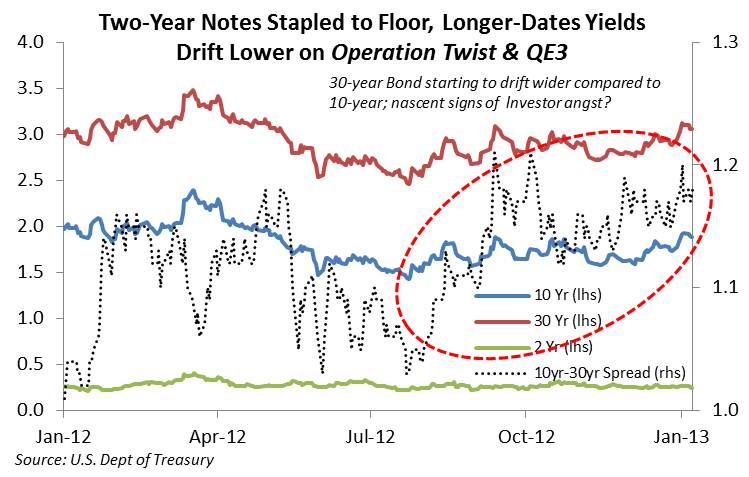 As for the impact on rates, if the yield on the two-year note were a patient’s heart rate, the next of kin would be grabbing a shovel. It has been flat-lined at 0.25% ever since the Fed began its extraordinary measures. (For those who don’t follow the bond market closely, these shorter-dated notes are the ones most tightly tethered to the Fed Funds Rate, which has been set….seemingly in perpetuity…at 0%-0.25%). Long-term rates have been equally boring, with the only move downward occurring mid-year when markets were spooked by the combination of weaker emerging market growth and another abscess in the Eurozone debt saga.

What Does it Mean?
Usually as an economy gets deeper into recovery, investors shift their concerns from not enough growth to too much, which means inflation. As sentiment changes, longer-dated bonds sell off. Three years into the recovery this scenario has yet to occur as inflation remains tame and the Fed has become the marginal buyer, supporting bond prices by absorbing large swaths of the market. Unfortunately, this means tossing out the textbooks when it comes to using bond yields as an effective gauge on how investors perceive future growth prospects.

And Going Forward….
As seen in the chart, over the latter half of the year, the spread between the 10-year and 30-Year has slowly trended wider. Look for this expansion to continue, which in the real economy could translate into mortgages going from absurdly low to simply extraordinarily low (for the few who qualify). Also any sell-off in longer dated bonds will likely hit investors who piled into fixed income over the past several years right in the teeth.  Although the minutes of the most recent Fed meeting hinted that some committee members voiced an interest in tamping down on some of its easing initiatives by the end of 2013, one may risk asphyxia should he hold is breathe awaiting that eventuality.

The Wrap Up
When the Fed announced its first wave of extraordinary measures, there was much discussion on how such easing mechanisms would be reversed. The expectation was that steps to absorb excess, temporary (hee hee), Liquidity would be implemented within months. It has now been years and that aspect of the conversation has faded from memory. Very little points to the Fed, or other developed market central banks initiating any hawkish moves over the coming year. But as it continues, even by the Fed’s own admission, QE has diminishing returns. Eventually it may become white noise and another component of The New Normal, marked by low growth and weak inflationary pressure thanks to dreary aggregate demand and sticky joblessness.

With regard to markets, should this scenario become calcified, markets may finally return to moving mainly on the fundamentals relevant to each asset class rather than any larger, policy-driven macro-overlay. They would just do so with lower returns expectations. Should that occur, investors may at least be able to generate excess returns by tactically adjusting allocations as movements in major asset classes finally decouple from each other. Solely for the sake of diversification, that would be a welcome step indeed.
Posted by Rob Morrison at 11:30 AM