Four Issues Consumers (and Investors) Should Know about Commodities in 2013

With a gallon of gas …. the mother’s milk of American culture ….once again averaging north of $3.50, consumers are paying increased attention to the price of commodities, the ubiquitous but little understood building blocks of the global economy.  Most readers usually associate commodities markets with the oft-reported price for a barrel of oil or radio commercials from the apocalyptic gold cult. Less known is that the markets for these resources help establish the prices for nearly everything our manufacturers fabricate, the fuel necessary to warm and propel us, and for most things we stick down our throats…..even chocolate and our beloved morning brew. In fact, perhaps no other topic encompasses the focus of these pages...the nexus between economics, the consumer and financial markets...than do commodities. With the world still relying upon less-efficient emerging regions for growth, the continuing expansion of global trade, and shifting fundamentals in underlying commodities markets, stakeholders more than ever should be aware how these resources impact the global economy, and more increasingly, their investment portfolios.

Fundamentals: The Commodities Super-Cycle is Still Intact
Although there is sizable involvement of noncommercial…or speculative…investors in commodities markets, more often than not prices are determined by the supply and demand fundamentals of commercial users. Historically…and when adjusted for inflation….commodities prices were flat for much of the past century, making them a lousy investment over the long term. The reason being there were plenty of cheap, new sources of oil, metals and crops to bring online to meet increasing demand from commodities-intensive advanced economies. The result of this supply/demand imbalance…tipped towards the former….was that the commodities space was the victim of underinvestment for decades. 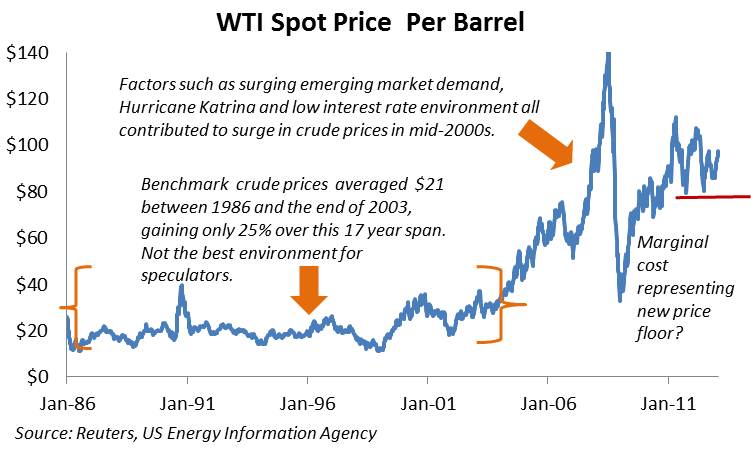 Then things changed. In one of the more annoying coincidences of the industrial age, highly-populated emerging economies, namely in Asia, entered an accelerated growth phrase right around the same time the most easily accessible sources of raw materials were being tapped out. This does mean the alarmists are correct about their Peak Oil theories any more than they are regarding mythical U.N. black helicopters hovering over cities or Google tracking every keystroke we make on our computers….well maybe they are onto something with that last one. Instead, it means that to meet future demand, extraction companies will have to rely upon the harder-to-find, complex sources of materials that until now have been either economically or technically unfeasible to access. 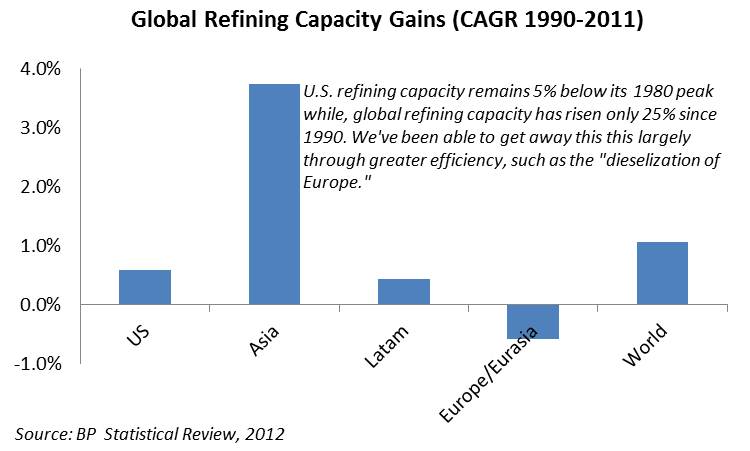 This brings up the important…and misunderstood….concept of marginal cost. Prices are set at the margin. Yes, Saudis can still pump crude for about 20 bucks a barrel. But that oil has already been allocated to existing demand. The next unit of demand….likely coming from a Chinese professional combatting Beijing traffic in a recently-purchased rolling status symbol….will have to be met by the newest sources of supply coming online. And the prices of these marginal barrels, emanating from deep water wells and North American oil sands, are in the neighborhood of $75 to $100 per barrel. 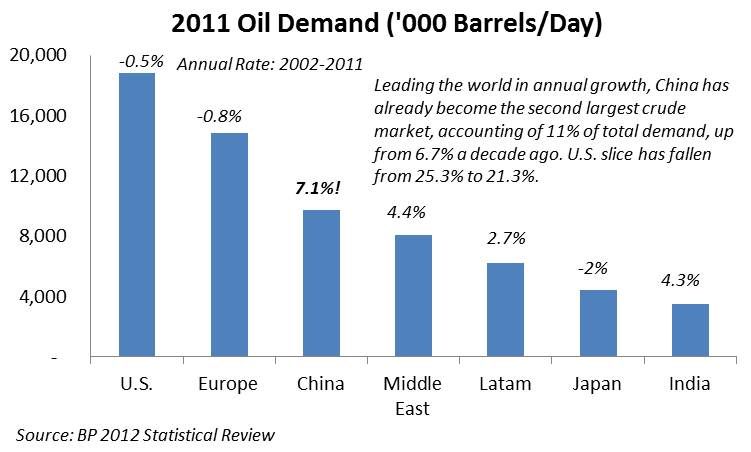 This dynamic is being played out across the commodities universe. Miners of industrial metals must either dig deeper or expand their operations in dodgier parts of the world, which adds a premium for political risk onto the cost. Soft commodities (largely foodstuffs) are seeing marginal prices rise as much of the world’s most productive land is already being cultivated, implying additional acreage may yield fewer crops per unit. This is happening as much of the emerging world is switching from a grain-based diet to one heavy in protein. Counterintuitively such a shift greatly increases demand for animal feed like corn and soy, thus causing price hikes across those crops. As farmers reallocate land to meet that demand, it crowds out acreage previously allocated to wheat, spiking the prices for that key human staple. We won’t even bring up the idiocy that are ethanol and other biofuels mandates.

Other factors on the supply side also hint at sustained high prices. Bottlenecks in getting commodities to market are commonplace. Most noted is the dearth in new refining capacity in the United States. Energy intensive smelting for copper and aluminum are prey to either higher electricity costs or no power at all should droughts reduce access to hydroelectric power. Much of the world’s crude oil is produced by state-owned oil companies, which are notoriously less efficient than private sector integrated and exploration and production (E&P) firms. Bumbling politicians also do their damnedest to distort efficient price discovery. During food shortages, the kneejerk reaction of many officials is to impose quotas or limit exports, a recent example occurring in the Russian wheat market in 2010. Such action signals to buyers that supplies are tenuous, naturally causing them to scramble to purchase every last loaf of bread or grain of rice available. The end result: a price spike followed by low supply…exactly what such policy was intended to prevent. Similarly domestic price caps or limiting farmers’ access to high prices in global markets removes the profit incentive from producers, so they go off and play backgammon rather than operate at a loss. Industrial policy is also at play. Large state-owned Chinese steel and aluminum producers are hesitant turn off their mills, even during periods of excess inventory for fear of stoking unemployment. The end result: even greater inventory spikes and a plunge in spot prices.

It’s Not Really All About China…..Well, Yes It Is.
The first stage of China’s impact on commodities markets is largely complete; that is the relocation of much of the world’s manufacturing capacity to it and to other low-cost Asian countries. Not only did this absorb much of the world’s demand for industrial metals, but also Chinese factories are notoriously less energy-efficient than their western counterparts, thus putting pressure on fuels. China is already the largest consumer of many industrial metals, including aluminum, copper, nickel and zinc. More importantly, the country accounts for nearly all of the incremental increase in demand for these metals. 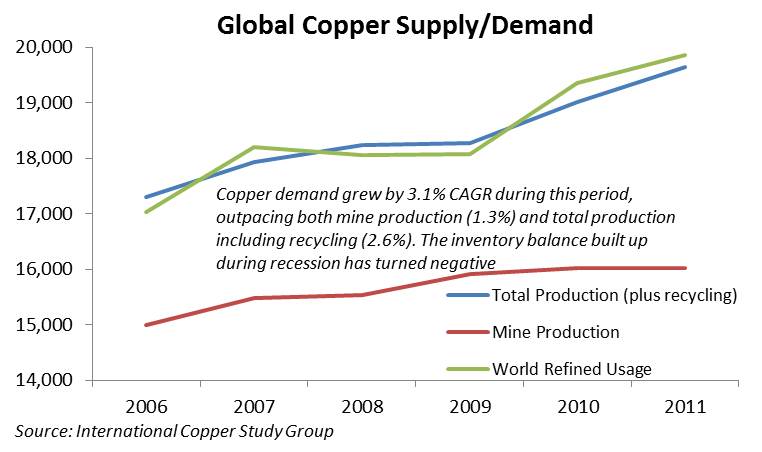 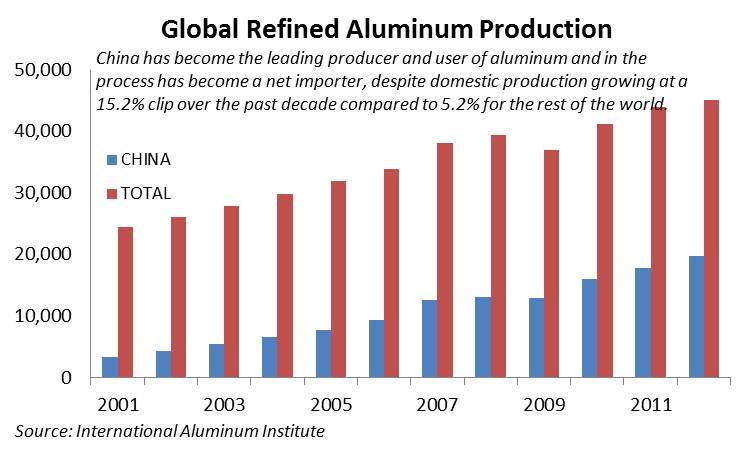 The next phase of China’s impact on commodities is being driven by infrastructure and construction spending. Although off its peak, investment in urban fixed assets still chugs along at a 20% year-on-year clip, stratospheric by western standards. And keep in mind that this is a country of 1.3 billion people, approximately half of whom still live in the sticks and want to relocate to an urban center where work is plentiful. This stage of development will continue to require metals geared towards dwelling and transport construction as well as power transmission. Great news if you are in the iron ore or aluminum industry. The future occupants of rapidly expanding cities all strive to achieve the minimal trappings of a stable working class…dare we say middle class…existence. That means greater electricity usage for gadgets, fuel to power metros or possibly a car, and as alluded to earlier, a diet weighted more towards meat. So yes, the meteoric trajectory of China’s growth (and commodities demand) has slightly waned, but that is simply the law of large numbers at play. The country is not going away and its impact on energy and agricultural resources will likely be key market drivers for years to come. 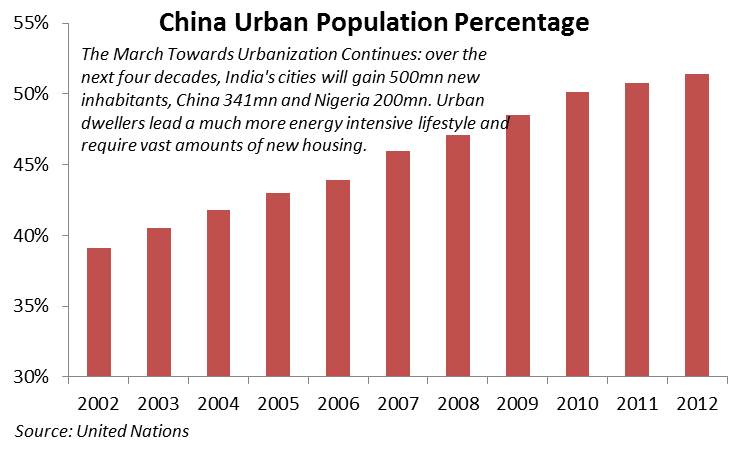 Speaking of Distortions
With the advent of this commodities super-cycle, investors have piled into futures markets seeking juicy returns. So much so that national regulators are constantly opening enquiries about whether speculators are driving prices to levels not justified by fundamentals. Paradoxically, the largest distorting factors in markets are likely caused by government action. The most obvious example being the miniscule interest rate policy of advanced nations. Their overt goal is to drive yield-seeking investors into riskier assets. And what is sitting out farther along the risk spectrum? Commodities. Current Fed policy is (overtly) a how-to guide on creating an asset bubble. At least with investors piling into equities and corporate bonds there is the chance corporate boards make take advantage of their newfound cheap funding to build factories or dial up M&A activity. With a commodities bubble, we get stuck with inflation in the form of higher prices for an assortment of raw materials.

Identifying asset bubbles and price equilibrium is more of an art than a science. But there is one egregious example of how current Fed policy distorting commodities markets. At the risk of getting too granular, low interest rates enable speculative investors use a mountain of cheap borrowed money to finance purchases of physical assets. They then hold these materials off the market in expectation of future price hikes. The result is lower amounts of commodities on the physical…or spot...market, which then leads straight to those higher prices. Great trade actually. Should financing costs rise to the point it becomes unprofitable, investors head for the exits….to the benefit of commercial buyers, and us, the consumer.

The Backlash of a Weak Dollar
The current low interest rate environment also is U.S. dollar bearish, even against the wretched Euro. Given the weak growth environment and laughable government finances, consensus calls for sustained USD weakness, especially against emerging market currencies. Most commodities are priced in dollars. When the USD depreciates it makes commodities more affordable to countries with non USD-linked currencies. It also ticks off commodities producers, whose USD-denominated profits convert back to lower amounts of their local currency. That means fewer Lamborghinis and palaces. So they may try to curtail supply to make up for lost revenue. The result is the same in either case: higher prices. That means inflationary pressure and the exact type of price appreciation that the Fed cannot control: imported inflation. As discussed in a posting from last July, much of the economic boost expected from rising exports during periods of USD weakness is offset by the increased prices Americans must pay for raw materials, especially energy products. The OECD may predict that the U.S. will once again become a leading energy exporter by 2020, but we are not there yet.