In last week’s posting, several still-intact factors of what has been called the commodities super-cycle were highlighted. Chief among them were not only continued urbanization and infrastructure spending in Asia, but also potential supply constraints of key industrial inputs in the metals and energy space (North American natural gas and shale oil not withstanding….although the possibility remains that overzealous regulators could shoot that gift horse right between the eyes). Regardless of fundamental strength, it is an entirely different question whether or not commodities can still be considered attractive investments. In order to answer this we must first recognize what has drawn investors to commodities in the first place.

A Brief History of the World….Well At Least of Financial Markets over the Past Decade
Easy enough. As an asset class, commodities have historically shown little correlation with the dominant buckets in investment portfolios, namely equities and bonds. Over time, such a characteristic should have a smoothing effect on portfolio performance. Commodities also tend to be positively correlated with inflation, whereas other asset classes suffer in periods of rising prices. This makes sense as inflation diminishes the value of future cash flows from bond coupons and stock dividends. It also squeezes the profit margins of corporations hesitant to pass rising input costs onto consumers. Such rising industrial inputs are often commodities and thus direct exposure to them  would logically lead to positive returns. And speaking of returns, during the earlier part of the past decade, investors clamored for commodities exposure not only for diversification and inflation hedging, but also for the juicy yields the asset class offered in its own right. This was driven not only by the aforementioned fundamentals, but also by favorable investment conditions thanks to the Fed’s….ahem….low interest rates of 1%, which provided plenty of kindling for a range of asset bubbles. 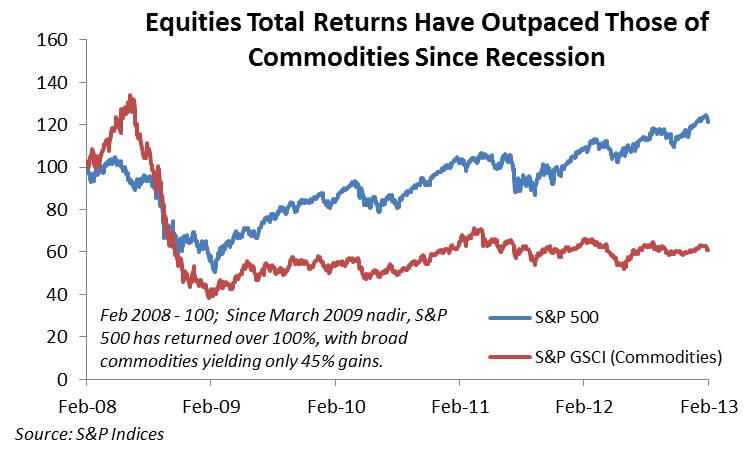 As with other investment management tenets, many of commodities’ attractions were turned on their head during and after the financial crisis. The chart above illustrates the crisis axiom that the only thing that goes up during recessions is correlations. Commodities, equities and other putatively risky assets all sold off in unison as investors clamored for cash. Even safe-haven precious metals were temporarily hit as investors were forced to sell what they could, not necessarily what they wanted to. While the yellow metal has bounced back….climbing over 100% since late 2008…many other segments, namely those associated with industrial inputs, have come nowhere near their pre-crisis peaks. Much of this can be attributed to the lack of demand brought about by the global recession, despite Chinese efforts to buy up nearly every natural resource upon which they could get their hands. With the nadir of the crisis four years behind us, investors must ask how the argument in favor of commodities has changed.

Zigging and Zagging
Prior to the go-go 2000’s, institutional money managers may have considered allocating a sliver of their portfolios to commodities with the expectation that the inclusion of an asset class not correlated with stocks and bonds would smooth out overall performance. As seen in the table below, for the 16 years preceding the financial crisis, commodities had a slight negative correlation to each of these other asset classes.  If stocks and/or bonds fell, there was a chance commodities would stay flat or even rise, thus offsetting losses in other buckets of the portfolio.

As stated earlier, during a market panic, correlations among risky assets go to 1, meaning they all sink together, and this is indeed what occurred in late 2008. Since then skittish investors have chucked market fundamentals out the window and have instead hung on every macroeconomic utterance emanating from the boardrooms of global central banks. The result is a risk-on / risk-off trading environment where investors view nearly all risky assets as homogeneous. Aggravating the situation is extraordinarily loose monetary policy, which is forcing investors to indiscriminately pile into assets further out along the risk spectrum. The end result is that by creating a binary universe of risky and non-risky assets, the benefits of diversifying a portfolio with commodities may be diminished. Despite possibly bullish fundamentals in particular commodities (or equities) segments, should authorities tap the brakes on generous monetary policy, there is the real possibility investors will once again flee all risky assets for safe havens such as cash or gold.

Inflation Hesitation
Not much makes an investor quake in his or her boots more than the specter of rising prices diminishing the real returns on their future cash flows. In advanced economies, inflation usually rears its head as a consequence of economic expansion as aggregate demand increases and employees with rising paychecks are more willing to put up with higher prices at Safeway, the mall or Bucky’s Gun Nirvana. Such a development is often welcome to equities investors who expect corporations will have an easier time raising prices during these periods. If, however, expenses rise to such a degree that firms cannot pass through the costs to customers without triggering demand destruction, equities may suffer. One source of higher input costs is raw materials, so commodities exposure may yield positive returns at the expense of corporate margins and consequently share prices.  While there is a gray area with equities regarding inflation, the attitude of bond investors is black & white: they hate it.

Referring once again to the table above, commodities have tended to be positively correlated to inflation, providing investors with a natural hedge for the more vulnerable parts of their portfolios. If one expects inflation to rear its ugly head, then dialing up the commodities allocation makes sense. Presently, there is little hint of inflation in advance economies. As seen below core CPI…excluding volatile and supposedly ephemeral food and energy components…is presently sitting at 1.9% in the United States, well below the Fed’s recently loosened target of 2.5%. Both it and the headline number have trended down over the past year. Additionally, in service-based economies like the United States, a chief contributor to upward price pressure is rising wages, and that is highly doubtful with unemployment stuck at 7.9%. 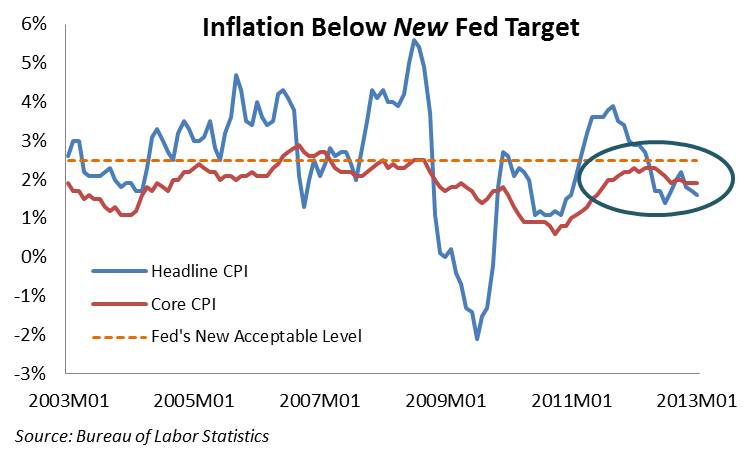 Despite the current benign environment, naysayers will have you believe that loose monetary policy will lead to asset-bubble driven inflationary pressure and that the Fed is notorious for being behind the curve in raising rates to combat higher prices. One way to gauge investors’ inflation expectations is to look at the inflation-protected Treasury market known as TIPS, most notably the implied inflation rate for periods farther out in the future. The chart below does just that, mapping out not only the average inflation rate priced into TIPS over a five-year and ten-year window, but also the average rate implied between the years 2018-2023, long after… supposedly…..the Fed has exited its current array of dovish programs. Since the advent of QE3 last autumn, this figure has stood just below 3%. Not Weimar Republic or Argentina territory, but well above the Fed’s normal-times acceptable range of 1.7% to 2%. 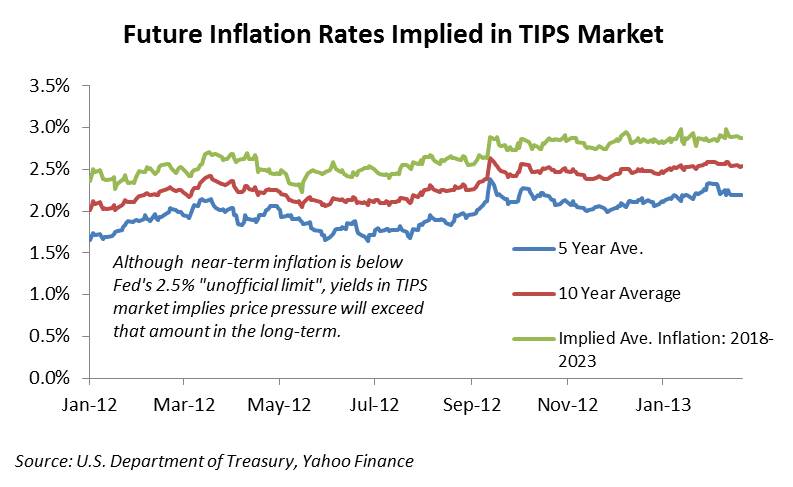 The Dollar's Role
One way in which low interest rates prime the pump for inflationary pressure is through a weakening of the dollar. As explained last week, a diminished greenback makes USD-denominated industrial inputs cheaper for countries whose currencies are not linked to the dollar (and yes this means commodities addict China is shooting itself in the foot with its soft peg to the USD). Cheaper prices means higher demand, which will conversely send up prices in USD-terms. This could lead to imported inflation, especially via energy products. As seen below, over the past four years there have been several bouts of extreme inverse relationships between the USD and commodities as measured by the broad S&P GSCI index. 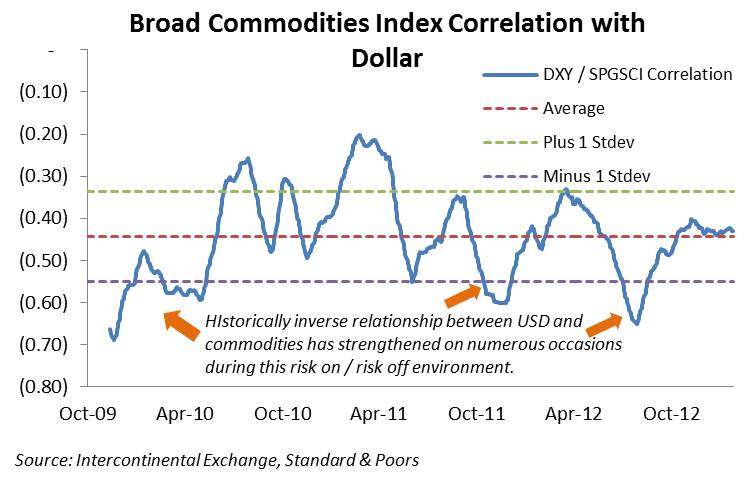 All of these inflationary scenarios bode well for maintaining exposure to commodities, especially if robust demand….belatedly….returns to advanced economies. Should the Fed be prudential in rolling back current policy, a measured sell-off in frothy bonds may be partially offset by a commodities allocation. But if authorities are behind the curve and inflation rises to levels that trigger demand destruction across the economy, or if investors fear the vagaries of the market without the guiding hand of Helicopter Ben and his perpetual liquidity machine…invented centuries ago by Herr Guttenberg…then the exit from risky assets could get ugly. In these situations, commodities exposure would doubtfully deliver the promised hedging benefits.

A Welcome Development
The last decade’s surge in emerging market demand along with epic-growth in the materials intensive U.S. housing sector triggered investors to turn to commodities for yet another reason: attractive returns. Hedge funds and institutional investors were the first to rush through the doors to capitalize on the supply/demand imbalances. Further liquidity was added through vehicles such as commodities ETFs that allowed retail investors to gain exposure to the asset class. These developments have proven to be a double-edged sword. Additional liquidity always greases the wheels of price discovery, but the acceptance of commodities as a viable slice of portfolios creates the possibility that its lack of correlation with other asset classes may be diminished during market sell-offs (the aforementioned risk-off trade). 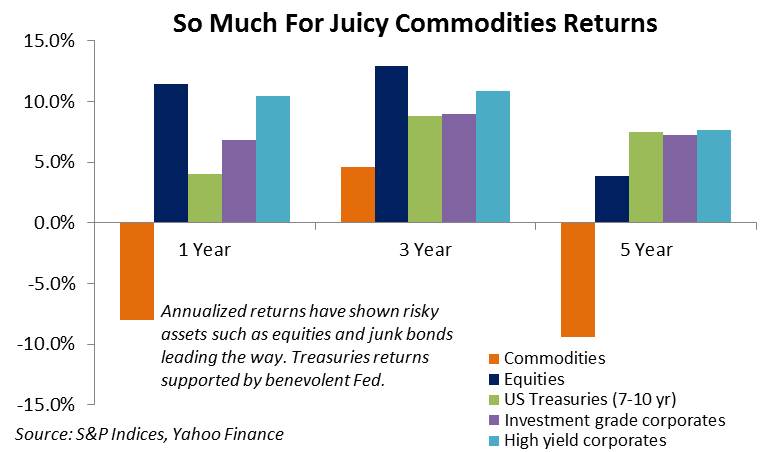 And sell off did they ever. As seen above, commodities have underperformed just about all other major asset classes during the past five years. Slower global growth, especially in the U.S. and EU are chief culprits.  Segment-specific factors have also shifted the balance back towards sufficient supply. Technological advances in drilling have unlocked North American natural gas, with expectations that shale oil may follow the same path.

Commodities returns are also influenced by the term structure of the futures contracts upon which many investment vehicles and strategies are based. In order to maintain long exposure, investors must factor in not only price movements of contracts, but also financing costs (currently negligible….a gift from the Fed) and the cost of periodically rolling over those contracts upon expiry and reinvesting them. As seen below, in periods of sufficient supply or weak demand the result is a cash outflow to maintain exposure. In more favorable trading environments, investors can earn positive returns when rolling these contracts. It all depends upon the fundamental dynamics at play in each bucket within the commodities space. 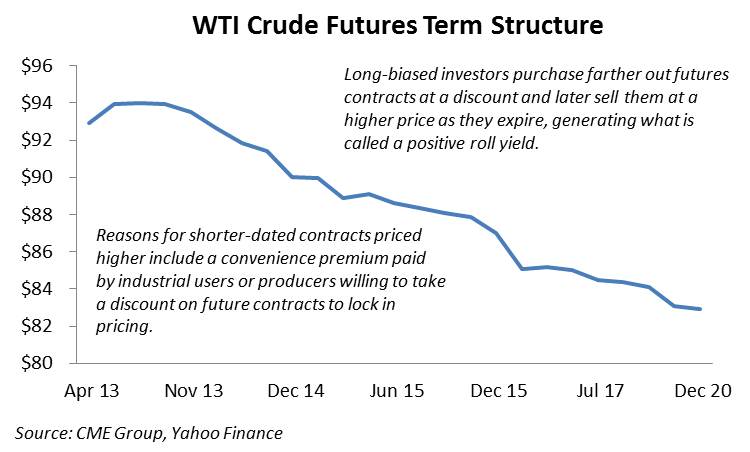 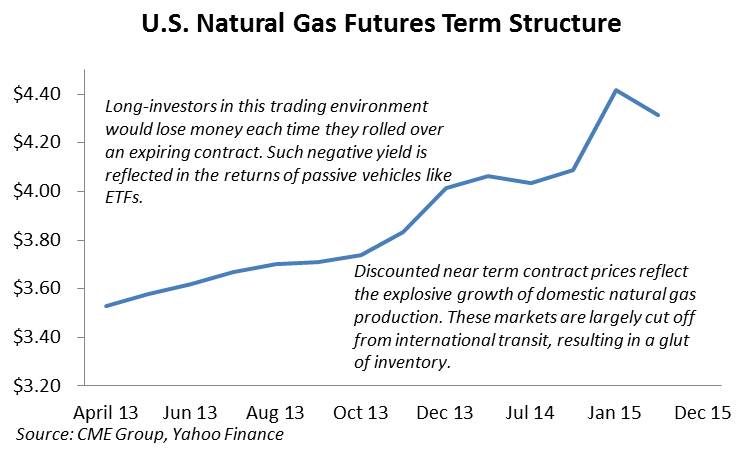 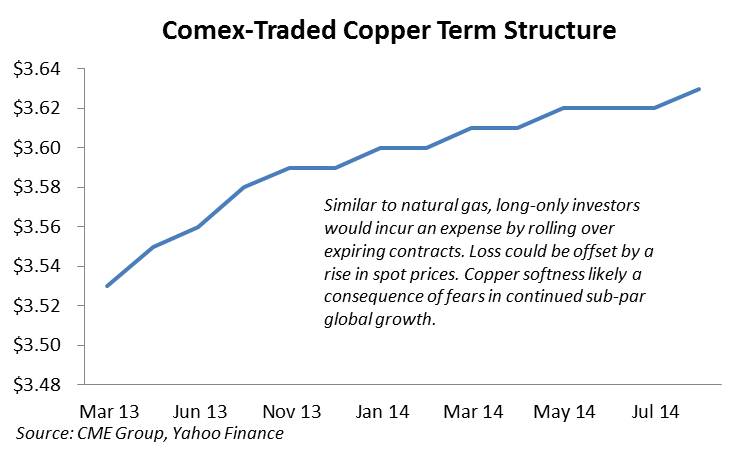 Is the Party Over? Not Likely
Commodities, unlike other asset classes don’t churn out periodic cash flows in the form of dividends or coupons. Instead of relying on DCF models to ascertain fair value, investors must gauge macroeconomic factors (growth, inflation and FX movements), underlying demand, physical inventory levels and even the vagaries of weather and trade disruptions in the form of labor disputes or conflict in sensitive regions. Taking all of these moving targets into account is an inexact science to say the least. Shifting also are the performance attributes of commodities within a diversified portfolio. Will they offset stock or bond losses? Does the tame near-term inflation outlook render exposure unnecessary? Will returns ever near the last decade’s pace? The answers are likely both yes and no. How? Going forward, savvy investors must analyze the space on a more granular level, gauging the attractiveness of energy, metals and agricultural products on their own merits.  Such a return to fundamentals…and sanity…will mean that investors can continue to judiciously use segments of the commodities space to smooth out returns, and perhaps even goose them, in both stable price and inflationary environments in the years to come.
Posted by Rob Morrison at 11:08 AM