Not that anyone scanning the headlines of the business pages could tell, but the second-quarter earnings season is wrapping up. For equities investors, this time should be spent scrutinizing corporate results and management prognostications for upcoming quarters. Instead, the focus of many market participants is still on the unfolding Eurozone crisis, the November election and dreaming up apocalyptic scenarios should the United States get flung off the fiscal cliff come January. Not that any of these are unimportant. As a saying goes, the stock market is driven by earnings, economics and emotion. The latter two have certainly come to the fore in recent years, but we cannot overlook the fundamental importance of corporations’ ability to grow profits, find new revenue streams and return money to shareholders. There are plenty of excellent forums on the Internet focused on the stock market where one can drill into the torrent of earnings data. Instead of duplicating those…and in keeping with the theme of these pages….the purpose for our foray into the market is to divine what may be in store for the broader economy.


Stocks by their nature are forward looking. After all, a share price is what the market estimates to be the present value of future cash flows. Given the amount of analytical firepower focused on predicting future performance, stock prices are considered a valid indicator of economic prospects over the coming quarters, so much so that S&P 500 performance is included in the often-referenced Leading Economic Indicators aggregated by the Conference Board. Due to the distortions knocking around financial markets, the appeal of relying upon this indicator….as well as another market-based one, the U.S. Treasury yield curve….has been somewhat diminished.  Rather than extracting these previously useful data series from the investor tool kit and tossing them into the trash bin, we can skip the price data (for now) and instead concentrate on the trajectory of recent earnings seasons.
The Scalpel Please
As of last week, over 90% of the S&P 500 had reported earnings with nearly 65% of them beating analysts’ estimates. The quarter is on pace to record earnings of $25.48, which would be a new high water mark. Before popping the champagne we must remember that earnings are supposed to rise along with population growth and improvement in productivity. Instead we should concentrate on the pace of growth.  Earnings for full-year 2012 are expected to reach $101.86, which is a 6% gain over 2011’s profits. Earnings for that year rose 15% and for 2010 the gain was a whopping 47%, albeit due to the base effect thanks to a miserable 2009. Clearly the pace of earnings is slowing and this is especially evident when looking at other recent recoveries when corporations were able to churn out a stable stream of impressive results. Furthermore, the Q2 $25.48 estimate has been revised down by over 7% since last year. As is the case with other data such as GDP growth, lending and job gains, earnings further add to the argument that this period of…ahem….recovery is the weakest the U.S. has registered in several cycles. 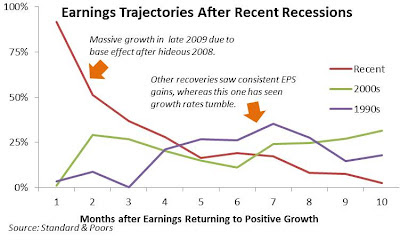 A central characteristic of corporate performance over the past few years is how much firms have relied upon growing the bottom line by trimming expenses rather than significantly growing revenues. In a service economy constituted like America’s, a key source of cost-cutting is layoffs, which in-turn contributes to a negative feedback loop by causing consumers to cut back on spending (70% of GDP), which only further inhibits sales gains. Although not as draconian as the dramatic cost cutting in the immediate aftermath of the 2008/2009 financial crisis, what meager EPS growth there is has largely been a result of continued cuts. As seen in the chart below, the most recent quarters have continued to see earnings growth outpace revenues. A lean-running firm is a good thing, but as the saying goes, eventually the cuts start getting into muscle and bone, thus potentially making the firm ill-equipped to take advantage of growth opportunities….should they return. 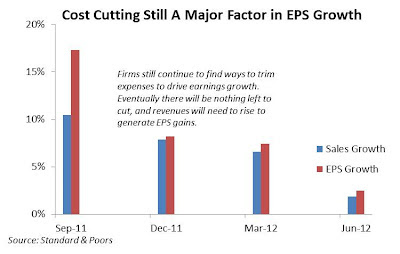 To a certain extent, international operations and exports have aided the top-line for large cap corporations in recent years, but with the Eurozone crisis still unresolved and emerging market growth apparently cooling off, it is now up to American consumers to open up their wallets to drive revenues higher. High unemployment, tight credit and the loss of the go-go 2000’s home-equity ATM machine only make that possibility all the more tenuous.

Winning Back Traumatized Investors? Not Yet...
Aside from the depressing pace of earnings growth, what else can equities tell us about the current (and future) state of the economy? It is here we turn to prices and the emotional component of the stock market. A goal of the Fed’s expansionary monetary policy is to crowd investors out of safer bonds and drive money into riskier investments such as stocks. The rationale for this is twofold: to lower the cost of capital for firms, thus catalyzing them to invest in new capital stock (and hopefully hire idle workers), and to instill a wealth effect for the investor class, spurring them to go on a shopping spree every time they receive a brokerage statement in the mail (a possibility largely offset by their home values having taken a substantial whack over the past half decade).
At right around 1,400, the S&P 500 is only 10% off its pre-crisis peak and has gained nearly 30% from its most recent trough in October 2011. Such a pop would have investors feeling pretty good…if any of them were actively participating in the rally. As seen in the second chart, daily volume has tapered off over the course of 2012, with the typical summer lull being especially pronounced. If there was greater investor participation, the late-summer rally would appear more sustainable. Should volume rise, especially on days with price gains, the recent spike may be validated. Lack of trading activity is also reflected in lower market volatility as measured by the CBOE’s VIX index, which is currently below 15, compared to an average of 22 over the past two years. 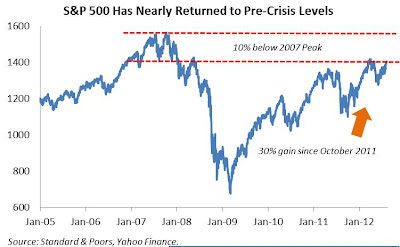 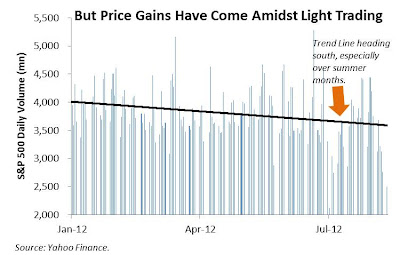 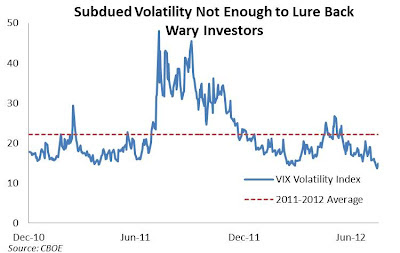 Although volatility has diminished, the damage has been done as investors have consistently dumped U.S. equity funds in search of safer harbors (in the case of bonds) or higher returns (in the case of international equities).  According to the Investment Company Institute, between January and July of this year, nearly $59 billion has been withdrawn from domestic equity funds.  After the 57% drop in the S&P level during the crisis, investor confidence is a hard thing to recover. 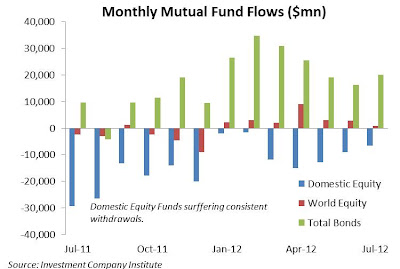 Have I Got a Bargain For You!
The dearth of trading activity along with steady outflows from equity funds is likely stymying the Fed’s efforts to induce a wealth effect. But for those active in the market (ignoring lion’s share of trading undertaken by nameless, faceless, pulseless algorithmic programs), do they feel richer? That depends upon how frothy one considers current valuations. To judge that, we’ll take a peak at the S&P’s price-earnings (P/E) ratio.  Based on full-year 2012 earnings estimates, the S&P currently has a P/E ratio of 13.8. Interestingly, the index has gained 10% since early June despite the downward revision of earnings estimates, which one would expect to have caused investors to run to the hills.  Even if the index level (the numerator in the ratio) had remained constant, lower earnings (the denominator), would have inferred an expanding P/E ratio, indicating increased investor appetite for shares.  But with the index actually having risen, this signals an even stronger desire for stocks with the P/E ratio rising from 12.7 earlier in the summer. 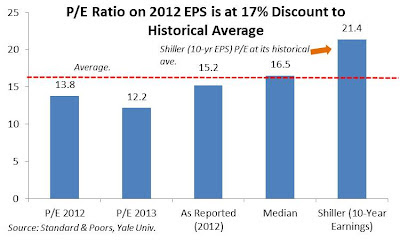 The current P/E based in 2012 earnings is still 17% below the ratio’s long-term average of 16.5. Still that discount has not been enough to entice investors back into the market. Other variations of the P/E ratio may in part explain why. When accounting for GAAP earnings rather than firm-defined continuing operations, the ratio rises to 15.2 (only an 8% discount). Then to factor out short-term price fluctuations, one can refer to the Shiller P/E ratio, which divides the index by the previous ten years’ inflation-adjusted earnings. This figure is currently 21.4, roughly in line with its 30-year average.
Assuming (always a dangerous word) that the Fed’s strategy of pushing investors further out along the risk spectrum is having some success, one can only imagine how deeply discounted equities would be without that prodding. But rather than dwell on the hypothetical, one must draw any conclusions on investors’ attitudes towards equities by looking at the cold hard numbers of fund withdrawals and decreasing trading volume. Back to our original point, when slicing and dicing the stock market for clues on the future health of the economy, since levels are likely distorted thanks to Fed policy and investor shell-shock, it is best to focus on trends in earnings. And as illustrated above, the conclusions drawn are not optimistic.
Posted by Rob Morrison at 8:43 PM