“Butter is Not a Premium Topping for Bagels” And Other Notes on Inflation.

When glancing at recent developments in financial markets and economic data releases, a person’s mind cannot be blamed for drifting towards thoughts of inflation, a phenomenon that has been a nonissue in post-crisis America, except for us not having enough of it (if this seems paradoxical, keep reading). After a dramatic drop in prices over the early summer, partly due to a strengthening dollar, crude oil has risen 22% in recent weeks and is now just beneath the $100 level. Even more dramatically, corn futures have rocketed 65%, caused mainly by the historic drought affecting much of America’s farm belt. Given the ubiquity of these two commodities in daily life, such spikes likely will cause consumers to pay more attention to prices for any sign of advancement at the pump or in the supermarket aisle. Not that these fears are unfounded, but there is a reason why economists prefer to watch core inflation data, which excludes volatile food and energy products, rather than the all-inclusive headline number. Over time, many of the fluctuations in volatile food and energy components tend to moderate and therefore do not lead to broad-based, sustained inflation. 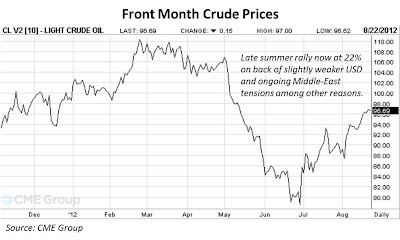 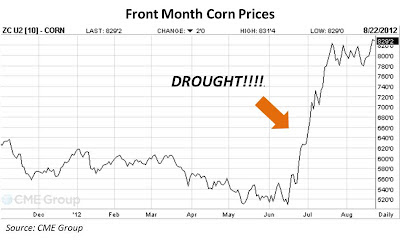 Last week also saw the release of July’s consumer price index (CPI), which shows year-on-year headline inflation continuing to decline after a significant rise in 2011. Core CPI’s rate of growth dipped as well, to 2.1% over July 2011 levels. This is far from the deflationary environment many feared would occur as American consumers keep their credit cards holstered and concentrate on digging out from under massive debt infamously built up over the past decade. Deflation, defined as broad-based falling prices, in a highly levered economy could to lead to thinner profit margins at businesses and even missed interest payments, thus causing a wave of cost-cutting (i.e. job losses) and corporate defaults. Such a scenario is a key reason the Federal Reserve has thrown the loose-money kitchen sink at the problem in the forms of QE1, QE2 and Operation Twist. Predictable and manageable price increases are a sign of a healthy economy as it translates into rising corporate revenues, wage increases and possible gains in equity markets. Bond investors, on the other hand, hate any whiff of inflation. 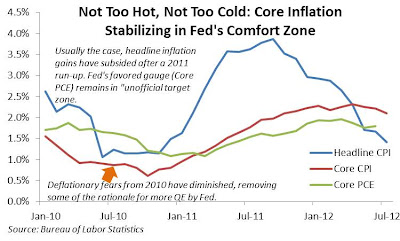 Sticker Shock
Upon returning to the United States, I once again took up the tradition of grabbing a bagel before early morning bike rides. Seven years ago the cost was about 75 cents, toss in another quarter for butter. On my first visit back to the local bakery, I noticed the bagel’s price had risen to one dollar. Prices go up, and it had been over half a decade after all. I could live with that. But at the cash register, I was shocked to see my total price was $1.60. Butter had risen over two-fold! I was shocked. Outraged! The cashier rationalized it by saying butter was now included in the premium topping category, alongside papaya-flavored cream cheese. What? This is butter! It’s given away freely at every Waffle House and Denny’s in the country!

Once they restrained me and management agreed not to press charges, I realized my reaction…although excessive….was both a common one and also silly. After all, what portion of my budget do I spend on butter? This leads to key characteristic about inflation: while food and gas price increases command our attention…and raise our ire…they do not constitute as much of our consumption as one would think. As seen below, food only accounts for 14% of the U.S. consumption pie and energy another 10%. In emerging economies food can comprise up to 50% of a family’s budget, meaning any rise in (volatile) agricultural goods can have harsh economic and even social consequences. 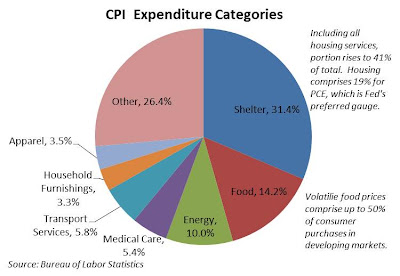 Revisiting corn, which is the nation’s number one crop although Colorado’s plethora of medicinal marijuana dispensaries could cause one to think otherwise, its largest use is fuel, namely ethanol production thanks to juicy…and probably unrealistic…government blending mandates for crude refiners.  Another major use is feed for livestock. The 40% of the crop being allocated to ethanol along with rising global demand for protein-based diets putting pressure on remaining corn supplies, in part may explain why a stupid pat of butter now costs 60 cents at the local bagel joint. A dairy cow has got to eat after all. This brings up another point. When consumers purchase commodities products in their rawest form…say an ear of corn or a gallon of gasoline…increased costs are passed directly onto them. But for products where these materials are one of many inputs and undergo some form of processing, such as industrial plastics, transportation costs for retailers or that oh-so-tasty high-fructose corn syrup, initial price spikes are absorbed by companies, squeezing profits, and then passed onto consumers only if proven sustained.


The largest slice of the CPI pie is reserved for shelter, at 31%, with all-in housing costs accounting for 41%. Given the still tenuous shape of that sector…even with signs of life in the rental market…the weight of housing means inflation as measured by this index may be suspect until the sector rights itself. Another gauge, the one preferred by the Federal Reserve when deliberating monetary policy, is the personal consumption expenditure index (PCE), which captures a much broader array of purchases (with housing at 19% of the total bucket).  As seen in the first chart, core PCE has remained at or below 2%, which is the upper end of the Fed’s unofficial target range, for all of 2011. Despite inflation’s stickiness, many expect the Fed to announce new easing measures at its Jackson Hole conference next week given its efforts to achieve the other leg of its duel mandate…maximum employment…continue to prove woefully inadequate.


If Not From Butter? What Are The Sources of U.S. Inflation?


In a developed economy dominated by service industries, a primary source of inflation is wages. Just as weak housing is partly responsible for keeping a lid on price hikes, America’s 8.3% unemployment rate also acts as a tamp on upward pricing pressure.  Don’t believe it? Then go ask your supervisor for a raise and see how quickly it takes for security to show up at your cubicle with a cardboard box and stopwatch set at 15 minutes.


As seen in the chart below, PCE has averaged 2.2% growth over the past two decades. Although energy/gasoline gains accelerated during the commodities boom beginning in the early 2000s, it still could not outpace the biggest price gainer, which…surprisingly…is educational services, averaging over 6% per year. Other service-centric sectors also outpaced overall PCE growth, including healthcare (3.4%) and housing rentals (2.9%). Not to channel my inner Ron Paul, but as the good doctor has pointed out, healthcare and education are distorted by substantial government involvement, which interfere with free market price signals. Housing in the 2000s also fits that definition thanks to rock-bottom Fed Funds rates and policies aimed at increasing home ownership. That worked out well. On the flipside, household durable goods like electronics and appliance have decreased in price over the decades, along with telecom services. This is great if you want a new XBOX or cheap wireless data plan, but pretty lousy if you’d like to better yourself through higher education or undertake a complicated medical procedure. 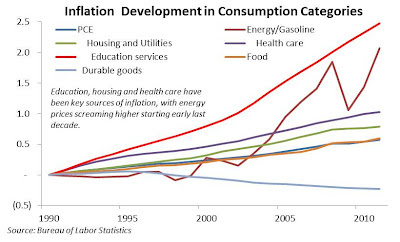 And the Future Holds…….?
When examining trends within the sources of inflation, economists and policy makers can estimate the trajectory of future price increases. But that is easier said than done, which is why central banks are notorious for being a step slow when attempting to reel in inflationary pressure often caused by their own post-recession loose monetary policy. The shadow of the Fed’s premature hawkish moves during the earlier stages of the Great Depression is a long one.


There is a range of market-based data that…in normal circumstances…lend insight into inflation expectations. One such signal is the shape of the U.S. Treasury yield curve. In the aftermath of the financial crisis, when the Fed pulled out all the stops to support growth (QE1), analysts predicted that so much easy money would inevitably lead to rising prices. Consequently, bond investors sold off longer dated Treasuries, sending their yields higher. With the short-term notes stapled to the floor thanks to the 0.25% Fed Funds rate, the yield curve steepened to a record level of over 275 basis points (bps) between the 10-Year and 2-Year Notes. Ironically, additional Fed policy later that year (QE2), rather than further steepening the curve on inflationary fears, actually flattened the curve (squished may be a more appropriate word) because the Fed itself became the marginal buyer of Treasuries. Looking at the current 10-2 spread of 150 bps, one could deduce that investors don’t see any reason to sell off bonds on account of incipient inflation on the horizon. That would be an erroneous assumption, as the market is distorted by the Fed’s actions, and Treasuries remain the largest and most liquid safe-harbor in a world still dealing with the Eurozone fallout and slowing emerging market growth. 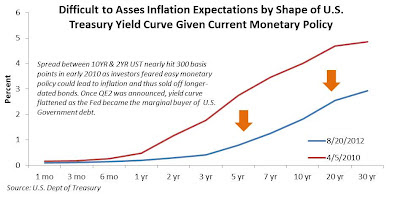 Another market-based inflation indicator is the inflation-protected TIPS market. Implied in their yields are inflation expectations for five years out, ten years out and to get really sexy, the period between years five and ten, in this case 2017 to 2022. As seen below, implied inflation over the next five years remains muted at 1.9%. The average for the entire 10-year period, currently 2.24% is in-line with the past few decades and just north of the Fed’s comfort zone. However, the final category (2017-2022), shows an implied rate of 2.6%. In a perfect world that infers that investors with skin in the game are betting on price levels potentially getting away from central bankers. But even in the best of times the TIPS market can send out some crazy signals given its relatively low liquidity compared to mainstream Treasuries. Furthermore, the whole government bond space has been distorted by the Fed’s recent measures, thus rendering these market-based measures less reliable than in the past. 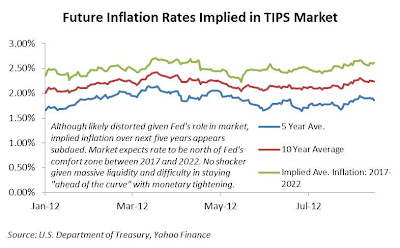 Lastly, despite the soft-jobs market, weak housing and America’s lower allocation of expenditure towards volatile commodities, inflation can rear its ugly head. A weakening dollar could solidify materials price gains, causing them to percolate into the core number. It is this type of commodities-based inflation that is difficult for central bankers to combat, meaning policy makers could once-again be shooting themselves in the feet, a la the low rates which fueled the housing bubble. Consumers, then experiencing sticker shock may start hording in expectation of even more price increases down the road. They also may demand higher wages, which, as stated, is a main inflationary force in a service economy. In that case, inflation becomes a self-fulfilling prophecy. Another way consumers react when confronted with inflation is to ration demand. When the pressure is from items not easily curtailed….like eating and enjoying the joyful daily 90-minute commute to the office….then consumers cut back where they can, namely on discretionary purchases like movies, apparel or travel. Although that decreases upward pricing pressure in those buckets, does absolutely no favors for the purveyors of those products.
For good reason, inflation has been off the radar screens of economists and consumers alike. But as evidenced by exogenous shocks like the current drought, and the tendency of monetary (and fiscal) policy to have unintended consequences, which often take years to germinate, price stability should soon once again enter into the national economic discussion. Given this point, perhaps next week’s page will be dedicated to gold investing.
Posted by Rob Morrison at 4:05 PM