Commodities in 2014: A Place in the Portfolio?

At a conference in 2007, a speaker initiated the proceedings by posing the question “what are the most expensive words in the English language?”  The answer to this was “it’s different this time.” The subject of the event was commodities, namely whether or not the space had developed sufficiently to be considered a viable asset class and a beneficial component of investors’ portfolios. During those heady pre-crisis days, the winds indeed appeared to be at the back of investing in raw materials. So much so that experts filled investment notes and the financial press with talk of a commodities super-cycle, driven by shifting supply/demand dynamics and rising investor appetite, partly fueled by the proliferation of new, accessible products. 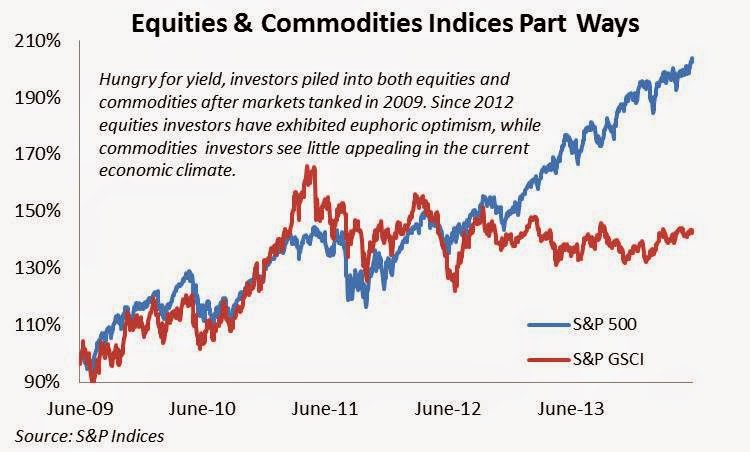 During the crisis and its immediate aftermath, the bullish case for commodities remained largely intact. This was the period when emerging markets…a theme related to commodities demand….were the engine that kept the global economy (barely) treading water. Aggressive monetary policy also provided support to the commodities space as investors ventured farther out along the risk spectrum in search of yield. A key attraction to commodities during the roaring 2000s was that they had become a viable source of returns, something that had eluded the asset class for decades.  Since the initial post-crash period, which was marked by the binary risk-on / risk-off trade, with Treasuries encompassing the latter and nearly everything else mindlessly lumped into the former, markets have shown greater differentiation among asset class performance.  And during these past three years commodities have really taken it on the chin. 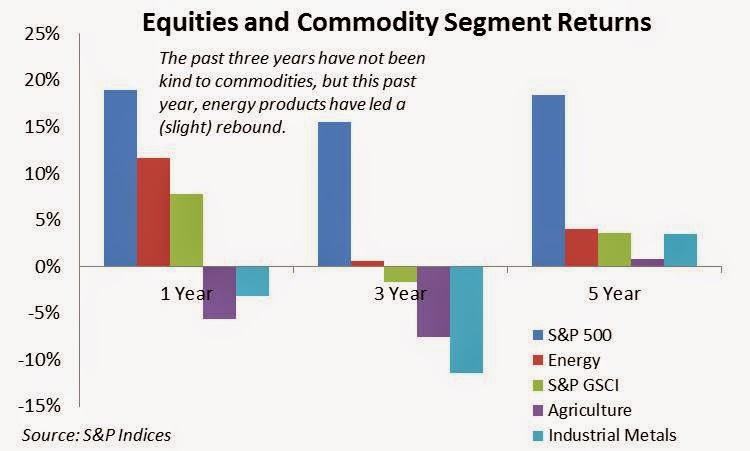 As seen in the table above, even as equities have sailed along at nearly a 16% annualized clip, total returns for the broad S&P GSCI commodities index have dipped into the red, with the agriculture and industrial metals buckets especially getting pummeled.  Now, with U.S. equity indices hovering near record highs, developed market bond yields at historic lows and trillions of dollars in fiat money lurking in the shadows, an investor must ask if dialing up commodities exposure at this time may at least in part address some of these sources of consternation.

A history lesson
Long considered a niche investment, commodities as an asset class have exhibited characteristics over the decades that were attractive to investors. They lacked correlation to major asset classes like equities and fixed income, meaning they could provide diversification when included in portfolios. Not coincidently, they tended to be positively correlated to the bane of many investments: inflation.  The logic was that rising raw materials prices squeezed corporate margins, thus diminishing the present value of a firm’s future cash flow, which by definition meant a lower stock price. Moderate inflation, driven by increased demand accompanying robust economic growth could allow both input costs (e.g. commodities) and stock prices to rise in lock step, but only up to a certain point before consumers get squeezed and snap shut their wallets. Conversely, inflation caused by an adverse supply shock of key raw materials…so-called cost-push inflation….seldom bodes well for stocks. Similarly, inflation and bonds are akin to oil and water. Any whiff of upward price pressure, regardless of the source, usually sends bond investors fleeing.

The downside to this inflation hedge and lack of correlation has been the volatility inherent in commodities, the difficulty in accessing them (historically available mainly through futures contracts and the physical market), and perhaps most importantly, the absence of any respectable yield. In fact, not only does a hunk of metal or bushel of corn not pay a coupon or a dividend, but investors often incur holding costs such as those for storage or rolling over expiring futures contracts, which were priced lower than farther-dated replacements.  Why were yields historically paltry? A simple answer is supply and demand: For much of the 20th century, there was plenty of easy-to-find oil, copper and arable land. As long as balances favored supply, it was difficult for raw materials prices to go on a sustained tear. Either producers would bring more product to market to meet increased demand or incipient inflation would sour consumers’ appetites in what industry-types call demand-destruction.

What fractured this status quo was, in a word, China. Over the past three decades much of the world’s manufacturing capacity was relocated this rising giant and to other low-cost countries. The industrial base of these developing nations was less than efficient, meaning for every unit of output, a greater amount of inputs was required vis-à-vis developed markets. This was true for energy consumption, the utilization of metals and an array of other raw materials. The lack of efficiency also applied to nonexistent pollution standards, but no worries, none of that toxic air drifted across the Pacific. Right.

At the same time these countries were updating infrastructure and housing, increasing demand for construction materials such as copper, steel and electricity (city dwellers are more energy intensive than country folk). Not to be left out, demand for agricultural commodities increased as large populations switched to protein-based diets, which paradoxically, require a greater amount of crops like soybeans and corn to fatten up cows and hogs for slaughter.

At the same time…..this was prior to the shale revolution sent from above….cheap sources of raw materials began to peter out. The crude, copper and aluminum were still there, but these harder-to-access materials required additional expenses in R&D, exploration and extraction, thus pushing up marginal costs. It was the confluence of this increased demand inconveniently occurring as supplies were pressured that lent credence to the super-cycle premise. Sensing there was a buck to be made, the investment community funneled cash to commodities firms to develop new resources; they also became active participants in the physical and futures markets. Why a bank needs to own a warehouse full of zinc is beyond me. But they did, resulting in increased demand from financial…or speculative…players, who bought raw materials not to produce anything, but simply to flip them and keep the profit.

The Shakeout
But this increased investor attention led to an increased correlation between commodities and other risky assets such as equities, undercutting one of the primary attractions of commodities in the first place. The measures undertaken in the wake of the financial crisis reinforced this development as yield-starved investors lumped all riskier…thus higher yielding….asset classes into the same bucket. Rock-bottom interest rates also played a role by making it cheaper to finance highly-levered commodities futures. As evidenced in the chart below, beginning in late 2008, the historical lack of correlation between equities and commodities abruptly rose to a range consistently above 0.50. 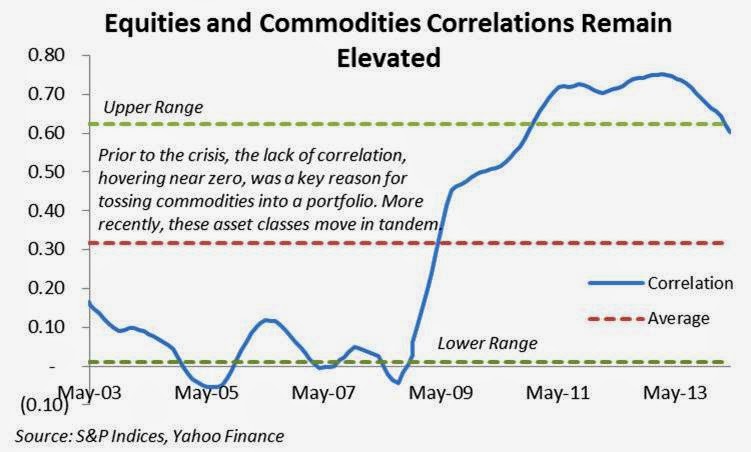 Since the depths of the financial crisis, it is safe to say that financial markets have returned but the economy hasn’t. This dynamic is represented by commodities, as measured by the S&P GSCI index, having traded sideways since mid-2011. Over the long-term, supply/demand fundamentals (theoretically….a loaded word) determine the prices for raw materials, and without robust growth in major economies, the 2009-2011 rally proved impossible to sustain. The divergence in fortunes between commodities and equities is also a reminder that increased correlation refers only to direction and not magnitude.

Speaking of markets
Another knock against the increase in speculative investors…as opposed to commercial users of physical commodities….is that often their allocation decisions are driven by macroeconomic developments rather than fundamentals. Yes, the participation of a certain amount of financial players increases liquidity, thus market functionality, but when taken too far, it distorts necessary signals from underlying supply/demand dynamics. This was certainly the case in the two years immediately following the crisis when the broad S&P GSCI returned a total of 25% and the energy, industrial metals and agricultural buckets returned 20%, 70% and 32% respectively. Since then, the broad index has returned -6%, with metals and crops getting especially routed.

Certain segments of the commodities universe are more tightly tied to economic growth. It should come as no surprise then that two such sectors, energy and industrial metals, have suffered over the past three years as global growth remains elusive. As seen below, growth since 2010 has been on a downward trajectory for most global regions. Of special concern is the lower rate of expansion in emerging markets, which had been the shining star after the crisis. 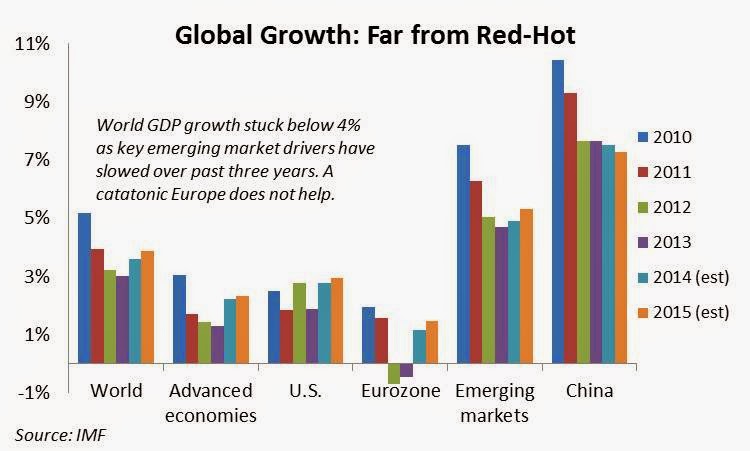 With economies stuck in low gear, inflation remains muted. While the Fed’s favored inflation gauge (below) ticked up to 1.6% year-on-year in April, the rolling three-month average is still a minuscule 1.2%, far below the 2.5% that they would happily accept. At the same time, the Eurozone is flirting with deflation. It says a lot when Japan is more effective in stoking upward price pressure than its advanced economy peers. Without any inflationary pressure to hedge, a further rationale for commodities exposure has been reduced. 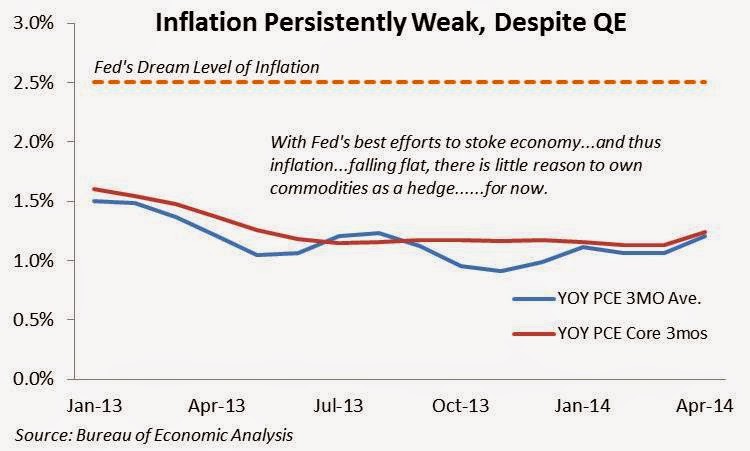 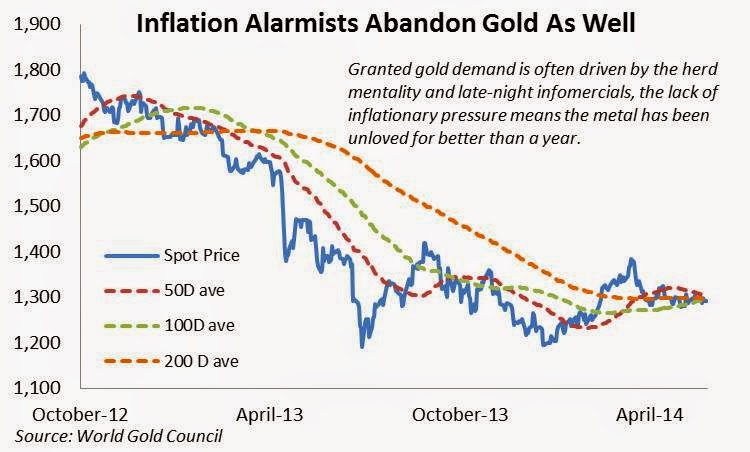 Falling short of the promise
As it stands, commodities exposure is not delivering what it has historically promised. Correlations with other risky assets are elevated, meaning there are few benefits of portfolio diversification. Even if the eventual curtailment of loose monetary policy chases away a large amount of speculative investors…in turn lowering correlations…other merits of owning commodities in the present environment also ring hollow. Inflation remains muted and with global growth stuck in a rut, commercial demand for industrial inputs will fail to match the rates registered earlier in the millennium. In such a scenario, investors may as well chase asset classes like equities, which despite dubious fundamentals, at least generate juicy returns. 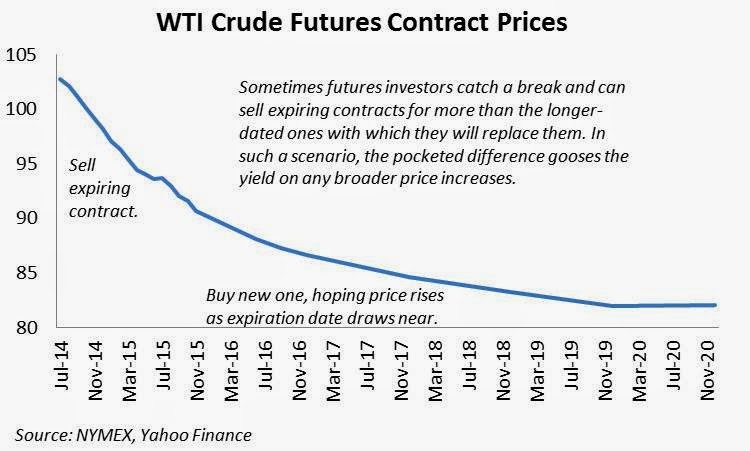 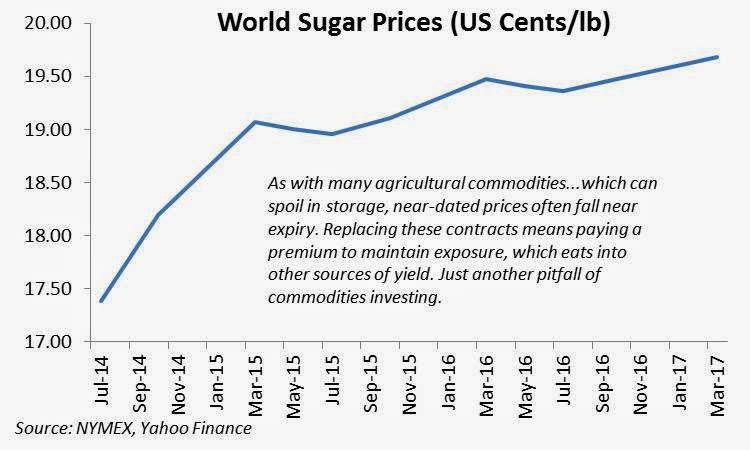 The genie however is out of the bottle and exposure to raw materials should remain on investors’ radar screens, if not in their portfolios at present.  Across the commodities universe, the new sources brought online after the latest round of investment largely have higher marginal costs than the fields, wells and mines of yesteryear. This provides a price floor to many different resources. And if central banks get behind the curve of controlling upward price pressure due to the mountains of money created to combat slow growth, then the need for an inflationary hedge may indeed reappear, especially if economic growth forecasts surprise to the upside…..but let’s not hold our breath for that.

For those itching to for commodities exposure today, one avenue is via the shares of commodities producers. Historically these tend to be more correlated with the overall equities market rather than physical market, but they are naturally levered (thanks to firms’ balance sheets) and they’ve been outperforming the broader market of late. Year to date, the energy sector of the S&P 500 has returned 7.5% (including dividends), outpacing the 5% of the broader index. Materials, meanwhile have returned a respectable 6.8% year-to-date. And there still may be more room to the upside as both sectors lagged well behind the S&P 500 over the past three years, with materials and energy returning 10.3% and 9.1% (annualized) compared to the 15.2% registered by the broader S&P. And as evidenced by certain segments of the physical market having tanked of late, investors may finally be differentiating between slices with favorable and unfavorable fundamentals.  While not a complete return to normalcy, this development means that those who do their homework can be rewarded.  The key is to identify resources with long-term favorable demand dynamics and whose current prices are not too far above the marginal costs of production, which in part may contribute to limiting downside risk.