Connecting the Dots: The Financial Sector and the Economy

The banking sector never seems to stray too far from the headlines of the financial press. And there is good reason for that. Financial companies occupy a unique nook in advanced economies as they serve as the transmission mechanism to allocate capital…in the form of excess savings…to its most effective use, which are investments offering the most attractive risk/return profile. Therefore an undeniable link exists between a healthy financial sector and overall economic well-being. In addition to this broader function, investors shower the sector with attention given that, even after the financial crisis, it remains the second largest bucket of the S&P 500. 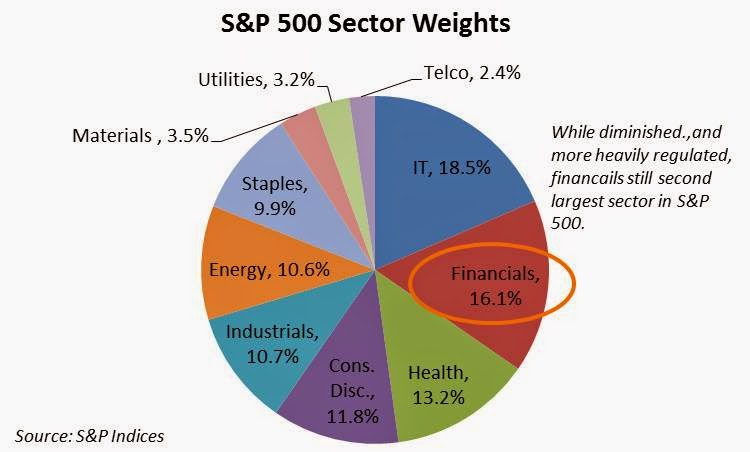 Investments are not like the entertainment industry, where any publicity is good publicity. Sector stalwarts continue to get raked over the coals for missteps in the run up to the financial crisis. Recent headlines involving one key player’s (Bank of America) error in reporting capital data are reminders of that. Also the current earnings season, as usual, has been front-loaded with banking announcements, which, while varying among components, collectively hints at challenges to top-line growth, especially in key business segments like fixed income and mortgage origination.

This week it is particularly relevant to examine the banking sector as the Dow Jones hit a record high and Q1 GDP data came in at a comatose 0.1% annualized gain.  Divining the health of banks can shed light on the….ahem….logic underlying the equities rally as well as whether or not we can expect GDP growth, which finally showed signs of life in H2 2013, to rebound after this past winter of discontent.

An inflated market raises all ships….justified or not
Investors love to say that equities rallies need the validation of financial stocks. In the current instance, they’ve got it….for the most part. Over the past year, excluding dividends, the financial sector has gained a shade over 17%, only slightly below the 17.6% registered by the S&P 500.  For 2013, financials actually outpaced the broader market, but have since come back to Earth, being nearly flat year-to-date, while the S&P 500 is up over 1.5%. 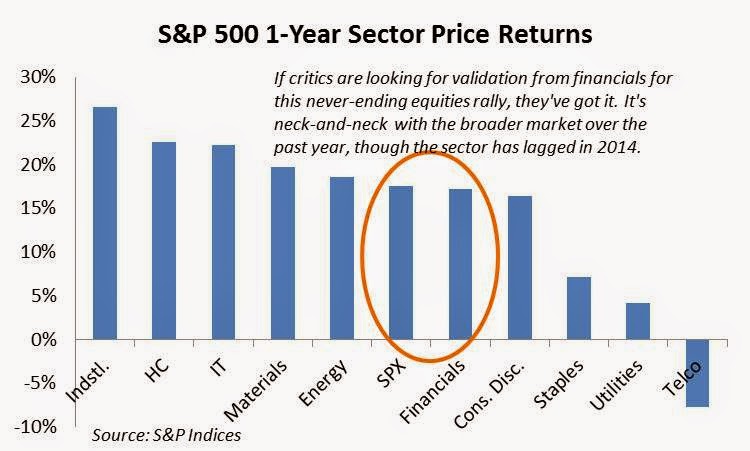 Looking further back in time, one can see the same story. Over one-year and three-year periods, on a total return basis, financials have trailed the S&P 20.4% to 19.8% and 13.7% to 12.3% respectively. Over a five-year timeframe, the delta is slightly larger with the S&P’s annualized returns clocking in at 19% and financials, underperforming at 16.9%. Over that length of time, two fewer percentage points makes a hefty difference in total returns. 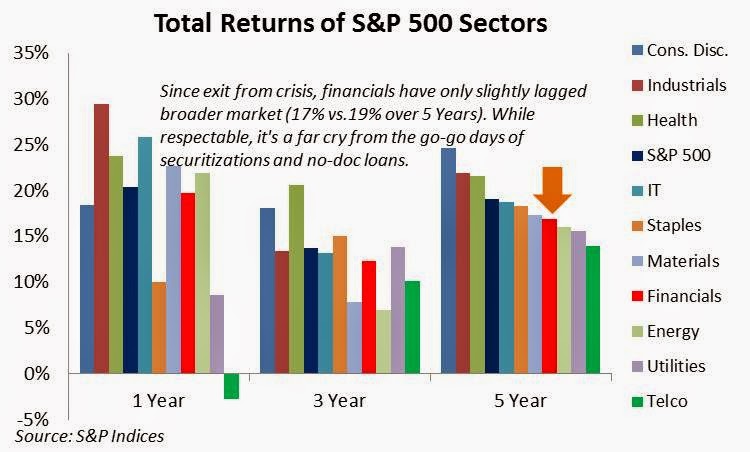 Of course the five-year returns encompass the aftermath of the financial crisis, which includes the bounce-back year of 2010, making all the numbers appear a bit jazzier than they would otherwise. Since then, the fact that financials have not joined more cyclical sectors like industrials, consumer discretionary and IT in the upper echelon of returns can be attributed to the regulatory constraints placed on the industry in the form of higher capital cushions, the evisceration of their trading business and the disappearance of the securitization cash cow.

Recent earnings reports from leading banks tell this story. JP Morgan (JPM) saw its net income decrease and Bank of America (BAC) recorded a net loss, in part due to litigation expenses stemming from the housing crisis. The environment remains challenging for large banks as every corporate treasurer and homeowner with a lick of common sense has already refinanced, locking in historic low interest rates far out into the future.  So what had been a source of strength in the early stages of the quantitative easing era has become a shortcoming for both fixed-income divisions and mortgage origination. Even Wells Fargo (WFC), which reported an increase in net income of 14%, did so on the back of cost-cutting and not needing as many reserves to cover loans previously considered suspect. Neither of those developments can be relied upon for future growth.

Instead, what will be needed in coming quarters is robust top-line growth and that can only come with an improving economic outlook that entices bankers to lend out their considerable funds at a substantially greater pace. Before jumping into that, we must ask the question whether or not banking shares are attractively priced.

Discounted….perhaps for good reason
As seen below, based on estimated full-year 2014 earnings, the nation’s five largest banks all have P/E ratios at 12.1 or under. These are at a discount to the 13.7 of the broader financial sector (below) and dramatically lower than the 15.6 P/E ratio of the S&P 500. Banks are cheap on a Price to Book Value basis as well. But cheap does not necessarily mean attractive.  While the sector as a whole has been aggressive in cleaning up the bad-debt mess from the financial crisis…as opposed to European banks…one can see that some firms still have lingering hangovers. Restrictions on dividends by authorities have hampered growth of that previously alluring component of financial shares. 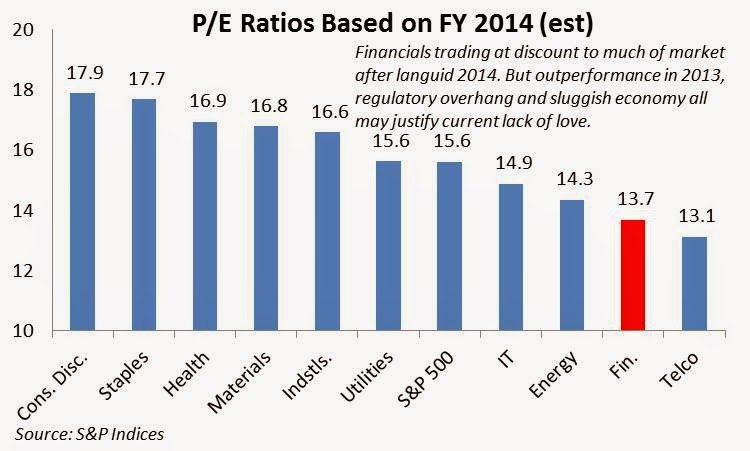 Prior to the financial crisis, when financials were metaphorically printing money, unlike the Fed, which literally printed it during multiple iterations of QE, investors were attracted to banking shares, not just for their securitization-fueled growth model, but also because it was the leading generator of dividends. And as we all know, the more quickly a Board can return capital to shareholders, the lower the chance that it goes off and funds some poorly thought-out acquisition (Countrywide comes to mind). Even today, as seen above, the sector still contributes the second greatest amount of dividends within the S&P 500. And this is with a collective dividend yield of 1.8%, firmly in the lower rung of sectors (telco is 5% and utilities are 3.8%). Imagine what financials could return if regulators took their foot off of bankers’ throats? 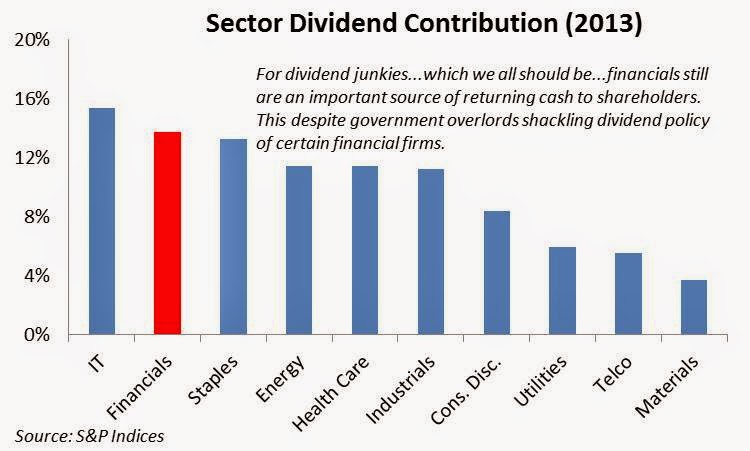 Spring is here. Are the green shoots?
One cannot lay blame for the sector’s woes entirely on its governmental overseers. After all, banks did take some egregious liberties in their lending practices in the mid-2000s, which has merited greater oversight. The other constraint hampering the sector is the economy itself. Corporate borrowers don’t like uncertainty and will not increase their fixed costs if future business prospects seem foggy at best. Even if the economy gets a mulligan in Q1 due to a wretched winter, GDP growth has still averaged a depressing 2% over the past 13 quarters. Similarly bankers hesitate to lend in such environments for fear of getting stuck with a bunch of dud loans. Ironically the same authorities that are encouraging banks to be less parsimonious with their reserves are the same ones threatening to sue them back to the Stone Age if their lending is deemed inappropriate or predatory…whatever those mean. 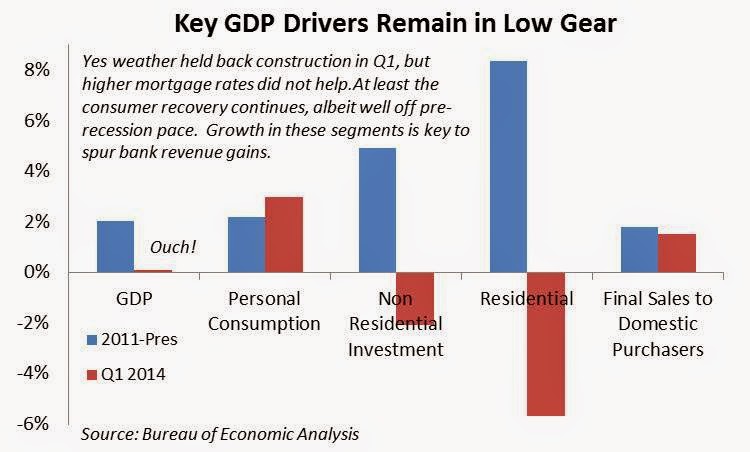 With the exception of personal consumption chiming in at 3% in Q1….evidently from brisk hot chocolate sales….the remainder of the data was abysmal. Headline growth was 0.1%, which is one tick from no growth. Nonresidential business investment dipped into negative territory and housing fell off a cliff at -5.7%, following Q4 2013’s wretched -7.9%. Yes some of that can be attributed to the cold, but higher mortgage rates (albeit still low by historical standards), did not help matters.

We have previously argued the need for the U.S. economy to rebalance away from a reliance on consumption, which accounts for two-thirds of GDP. Another favorite mantra is that residential construction should be a consequence of a robust economy, not the source of it, as was the case prior to the crisis. Resolution to those issues are years away however. In the here-and-now, the economy needs robust consumption and a rebound in housing, which sends positive reverberations through a range of other sectors. The problem is that, with a weak jobs market, household formation has slowed to a crawl and in several regions subdued wage gains impede the ability  of potential buyers to move upmarket from starter homes.

There are signs of optimism. As seen in the confusingly squiggly lines below, lending standards for commercial & industrial (C&I), auto, and general consumer loans have gradually loosened over the past two years. Demand has also picked up for these loans to meet this newfound supply. The sole exception has been mortgage demand, which has taken a nosedive as rates have risen and cash investors have satiated themselves after gorging on the market for years. 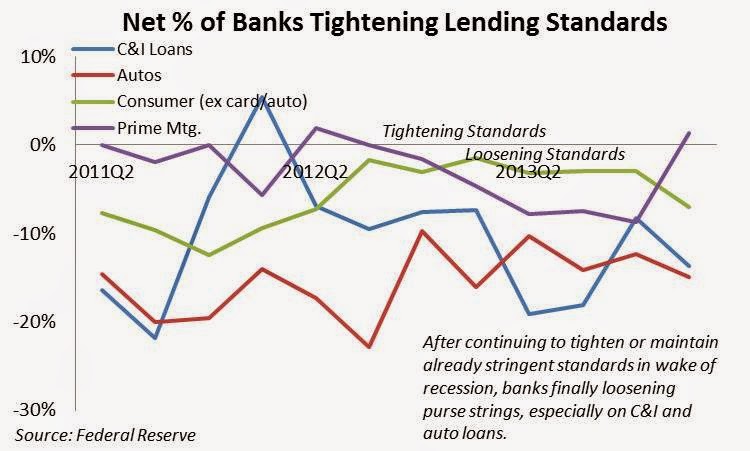 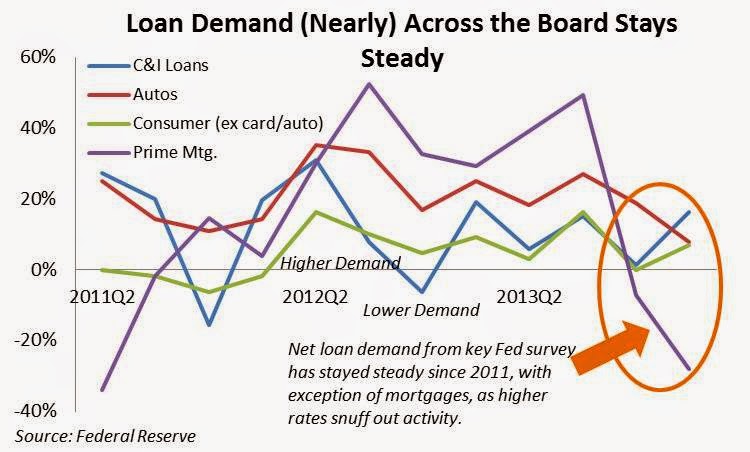 This thawing of the lending market can be seen in the return to growth of outstanding loans. While C&I loan expansion has been impressive over the past few quarters, growth in consumer and real estate loans remains well below pre-crisis levels. As noted above, these two areas have been major contributors to GDP growth over the past few decades and additional credit flowing into them will be necessary in order to increase the trajectory of what has been a frustratingly tepid recovery. On a brighter note, the growth in C&I loans likely represents credit flowing to small businesses…ones too small to tap the hyperactive bond market….which is important given the role smaller firms play in creating jobs in the United States. 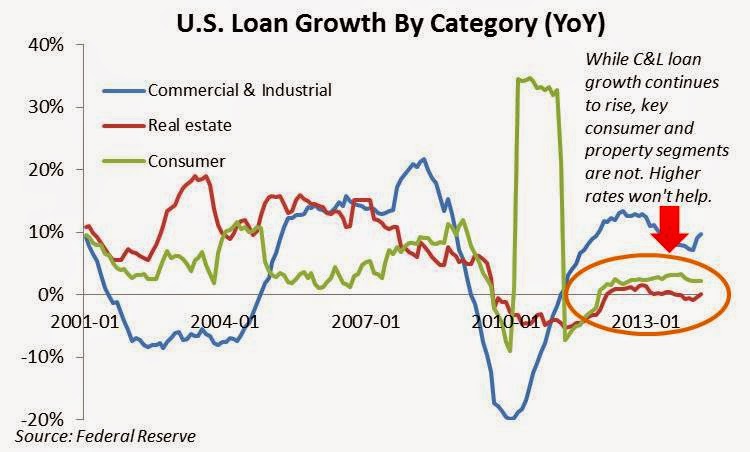 A rightful place in the portfolio? Better than tulips.
So it’s all connected. Optimistic banks, willing to lend, provide a needed catalyst in a highly-levered…euphemism for debt-addicted…advanced economy.  A healthy economy further instills the confidence of bankers and also rewards investors by juicing the profits of financial firms. Somewhere in here there is a story about the wealth effect and virtuous circles but it is 1:00 AM and my double espresso has finally worn off, so we best not go down that path.

Should one own banking shares today? At current valuations, why not? At the very least they help diversify one’s portfolio, are naturally levered investments and many listings are still sources of attractive dividends. Given the new regulatory hurdles of the gargantuan Dodd-Frank law and the tepid pace of economic growth, especially in debt-dependent sectors, there is probably not much room for upside. This is especially true if one is of the belief that the rationale of this extended bull market is tenuous at best.

Not to go totally macro but much depends upon the interest rate environment and how the Fed shimmies out of its extraordinary monetary policy. If one believes that the Fed will back off any threat to raise the Fed Funds rate thus keeping short-term notes tethered to the sub 1% range, and that excess liquidity (or a return respectable growth) will light the inflation flame causing a sell-off in longer-dated treasuries, the ensuing bear-steepening of the yield curve will be manna from heaven for banking net-interest margins. Conversely, if the Fed indeed raises rates while growth prospects remain muted, the consequent bear flattening would squeeze margins while at the same time discourage lending in the slow growth environment. Two divergent scenarios; a question investors and committees must hypothesize over in coming weeks.
Posted by Rob Morrison at 11:15 AM