Forget the Slide in Equities: Last Week's Story with Legs is the Sharp Rise in Bond Yields

Last week’s indiscriminant market sell-off caused much head-scratching in the investment community. But as posited here over the past several months, the consistent buoyancy of markets through much of the past year should have been the real cause of furled eyebrows and confounded looks. A market blowing off steam after such a run should not come as a shock to anyone. What is surprising, however, was the breadth of the sell-off. The S&P 500 is 4.6% off its all-time high set May 21st, including its headline-grabbing 2.5% slide on Thursday. 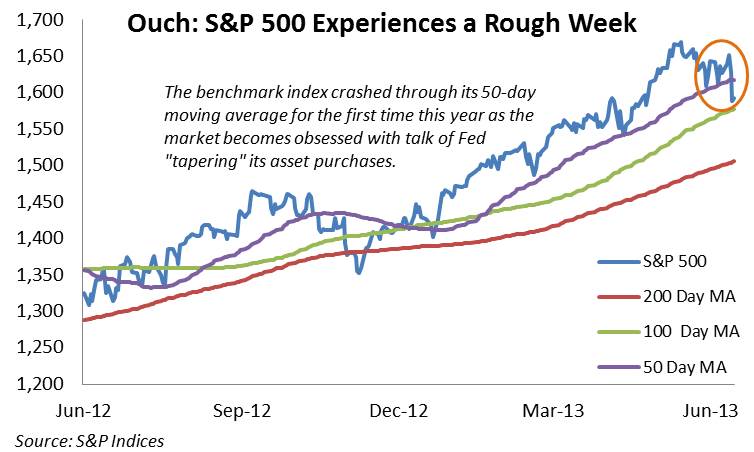 Rather than being the safe-haven ying to equities’ yang, U.S. Treasuries sold off more quickly than one can say financial repression, with the yield in the 10-Year Note rising 28 basis points over the week to 2.51%, its highest level since August 2011. Since the end of April, the yield on the 10-Year has risen 88 bps as bond investors ponder the nightmarish possibility of markets not being propped up by Fed largesse. 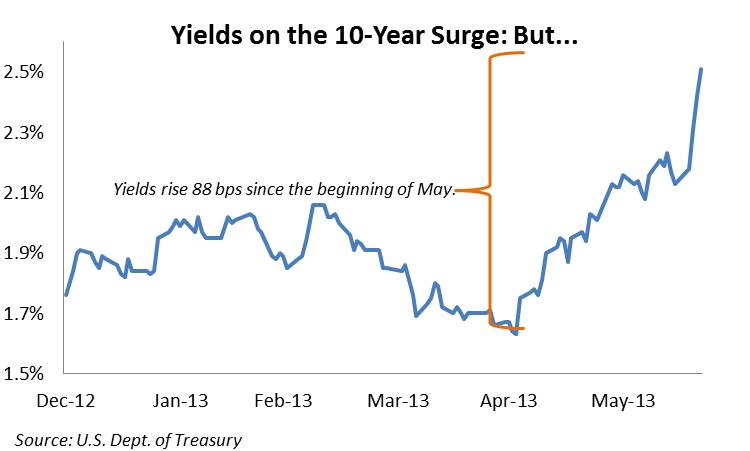 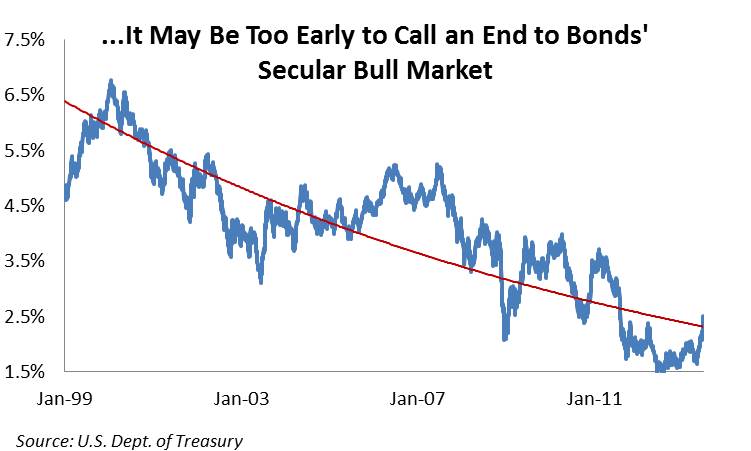 Dollars were the only real place to seek shelter last week with the Dollar Index, derived from a blend of major currencies, rising 2% over the five-day period. It was once said that if markets cannot trade on fundamentals, they trade on technicals. In the wake of the financial crisis, that phase can be amended with the term technicals being replaced with Fed-speak. It is less than comforting to know that your portfolio’s fate rests on a few well-placed….or omitted…adjectives within Fed policy statements and speeches. 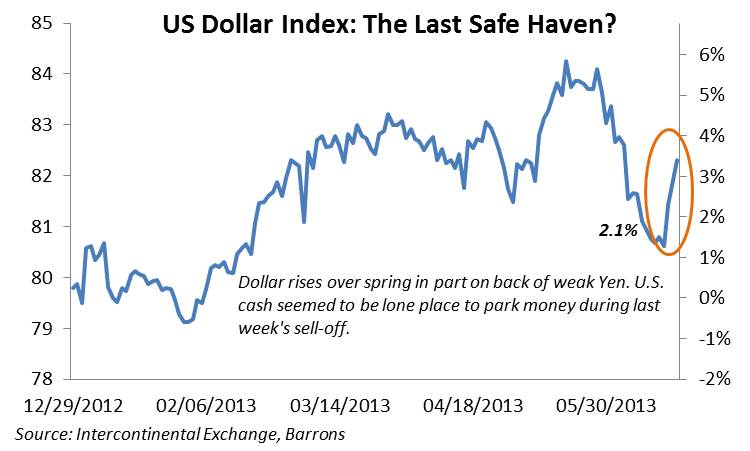 Bonds: The Source of the Fed’s Affection
Some perspective: despite the recent sell-off in Treasuries, yields are still near historic lows. The obvious explanation for such levels is that the Fed has sucked the oxygen out of the room by becoming the dominant buyer of U.S. paper over the past several years. Another contributing factor is that the central bank’s best….err most reckless….efforts to reflate the economy have fallen woefully short, meaning that sustainable (one of those haunting adjectives) growth and accompanying inflationary pressure are nowhere on the horizon. 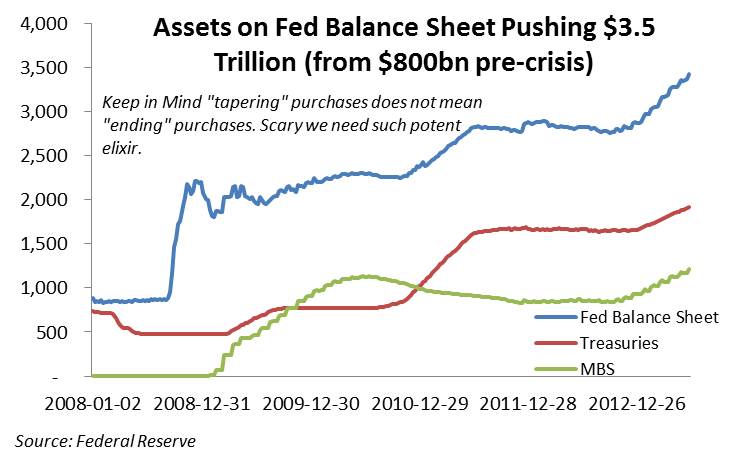 When the Fed initiated the first of its extraordinary measures during the height of the financial crisis, analysts were already busy hypothesizing how authorities would unwind these programs. There was near immediate talk of how reverse repos would work to sop up excess liquidity and a great parlor game was to guess how long before the FOMC would raise rates from its 0%-0.25% range. A dovish estimate at the time would have placed the first of such hikes in early 2010.  With regard to printing money, packaged under the seemingly harmless moniker of quantitative easing, the expectation was that there was not enough ink to Washington to create the volume of bills necessary for the Fed to influence the world’s largest, most liquid bond market, much less do so for an extended period of time. Oh, how little did we know. Fast forward nearly half a decade and the Fed’s support of financial markets is considered a given. Most rational-thinking analysts understand that such backing cannot continue indefinitely. Evidently there are many traders that do not belong to that camp. As soon as that dreadful word tapering entered the Fed’s lexicon, many market participants have behaved like petulant school children, shocked that their favorite toy…probably a slingshot…was being confiscated.

Muted Inflation: This Fiat Money Thing Is Not So Bad
Before dumping all financial assets, buying canned foods and retreating to your mountain bunker, we must consider an alternative scenario to explain last week’s sell off. Rather than the thought of losing the Fed’s loving hand spooking investors, perhaps it was evidence of the bond market’s historical bugaboo: nascent inflation. Recent data, however, shows little reason to fear coupon payments will be frittered away by rising prices.  Since spring 2012, year-on-year core inflation…the less volatile flavor, thus the one the Fed more closely watches due to its stickiness…has dipped from 2.3% to 1.7%, well within the central bank’s range of acceptability. 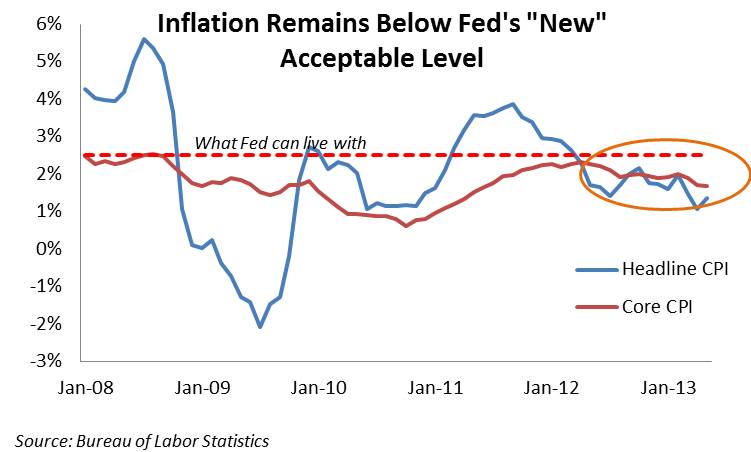 Such tame numbers not only imply that the U.S. is in a disinflationary environment, meaning bonds face little threat to the value of their cash flows, but they also provide fodder to the idea that the Fed can continue to maintain its dovish stance, including bond and MBS purchases. Inflation is only likely to appear once growth picks up, consumer demand returns and joblessness…at least measured by the all-in number of 13.8%.....recedes from the stratosphere (with all due respect to the unfortunate Spaniards). Unemployment is especially relevant in a service-based economy like America’s, where wage growth is a meaningful contributor to inflation. With regard to overall economic growth: it still stinks.

But perhaps the market is worried about the Fed being behind the curve, meaning that it won’t be able to unwind all its untested measures before prices lurch higher; a distinct possibility with the currency having been so egregiously debased over the past few years (and we have the gall to lecture the Japanese about jobbing the FX market).  Here too there appears…dangerous word…to be little threat. Using the TIPS market to gauge future inflation expectations, including the farther out period of 2018-2023, fears of elevated prices have actually receded since the beginning of the year. It must be said, however, that data derived from a bond market distorted by Fed activity may lack the credibility it had in years past. 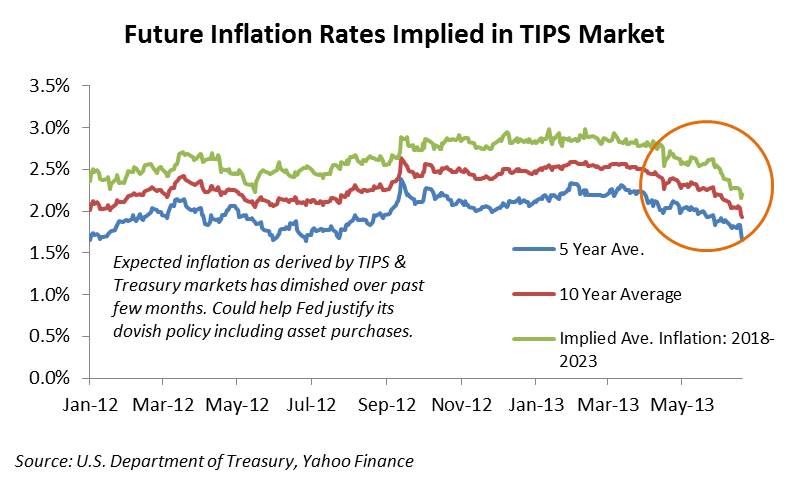 Impact on Main Street and in Your Portfolio
Although still at historically muted levels, the summer surge in Treasury yields is not exactly what a lethargic, debt-addicted economy needs as it struggles to reach the evidently mythical escape velocity, not that the previous four years of low rates and QE gave us any consequential growth. Higher interest payments for consumers and corporations could throw the type of wrench into the real economy that Chairman Bernanke has pined over for years. Yet this argument glosses over the reality that the problem in the post-crisis era has not been the cost of credit, but access to credit.  Small and mid-sizes businesses that are largely dependent upon loans for financing activity have largely been starved of credit. Given the role these firms play in job creation, this may partly explain the anemic growth in payrolls. Meanwhile large corporations with access to the bond market have hit pay dirt, refinancing at deliciously low rates. This development was part of Chairman Bernanke’s plan, with the expectation that such cheap funding would catalyze investment and job creation. Didn’t happen.

With regard to investment portfolios, rising rates are a mixed blessing. Investors can finally look to gain slightly less paltry rates on fixed income positions. Supply may be a challenge given that every firm with a marginally acceptable credit profile (and then some) has already issued bonds at rock-bottom rates. Investors who have gorged on this torrent of new issuance over the past few years had better be prepared to take a loss if they sell in a rising-rates environment. With debt issued at such low interest rates, it does not take much of a principal loss to wipe out the gains on coupon payments already received. The incipient housing recovery would also be put at risk should the benchmark rates to which mortgages are tied begin to creep up.  Housing demand is not benefitting from robust wage growth or loose credit terms from lenders, especially with Uncle Sam threatening to sue banks back to the stone-age with any whiff of what it broadly categorizes as unscrupulous lending practices.

Deeper into the Risk Pool: Equities Affected by Rising Rates
Rising rates will also likely have an impact on equities markets, although not as directly as they do with bonds. Improving yields on safer, fixed-income instruments such as Treasuries and investment grade corporates will remove a supporting factor for the long-running dividend payer theme. Why invest in more volatile shares when the yield on the safer security offers a superior risk-reward profile?  More subtle is the impact on financing activity by corporations. Throughout the entire low-interest rate environment, profit margins have benefited from the miniscule cost of debt financing. This is one of the reasons….along with sacking workers….that firms have been able to maintain respectable earnings growth despite lackluster sales gains.  Any substantive reversal in appetite for equities will go a long way in diminishing the Fed’s (far-fetched) goal of having the wealth effect sprout seeds for consumer-driven growth.

And Even Deeper: Commodities and Emerging Markets
Other buckets of risky assets have been nailed over the late spring as well. Over the final two days of last week, commodities, as measured by the S&P GSCI spot index sold off 4.1%, bringing its year-to-date retreat to -6%. Commodities were among the first set of risky assets cool their jets, having lost 12% since its most recent peak in September.  The acceleration of the decline last week should come as no surprise as commodities have been one of the favored destinations for yield-starved investors. Rather than just the breakdown of the Fed trade, there may be some fundamental underpinnings to a weaker commodities complex. Emerging markets, which account for outsized demand for several key raw materials are not growing at the pace they once were. Yet lower commodities prices may be one of the few rays of light in this reshuffling of risk. Although energy and materials companies won’t be singing about this development, other sectors, namely those that have commodities-intensive production and ingredients, may see a bump up in profit margins in light of lower input costs. This could go some way in offsetting the previously mentioned rises in interest expenses. Consumers may also benefit from cheaper gasoline and their favorite flavor of Haagen Dazs ice-cream. 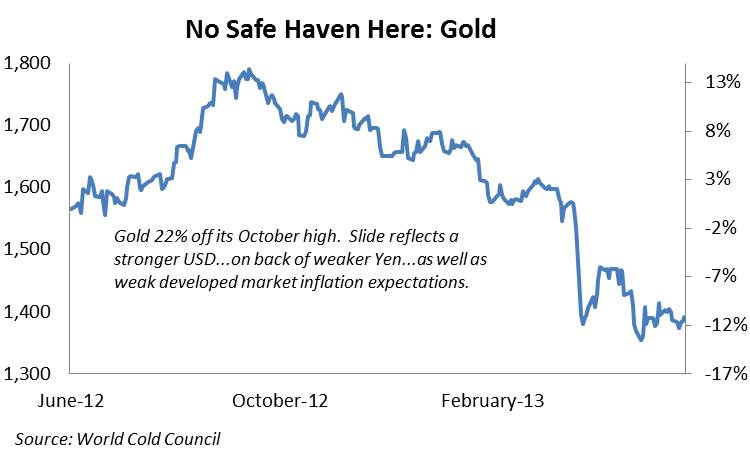 The sell-off in emerging market equities came later than that in commodities, but has been more ferocious, falling 16.8% from its January high. Not only may this be the consequence of investors baling out of frothy risky assets that had been driven higher on global central bank (not just Fed) policy, but also because of the aforementioned diminished growth expectations. 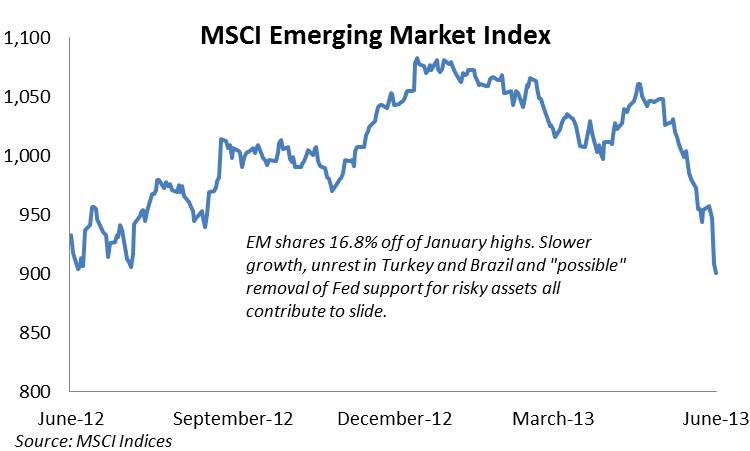 But here too, some perspective is needed. Compared to advanced economies, growth rates remain superior. If anything the removal of the incremental “oomph” provided by monetary policy distortions may bring emerging market valuations back down to levels attractive enough to entice investors to gain exposure to solid secular…that is long-term…themes. And isn’t that the name of the game? Developing sound investment arguments and entering them at attractive price-points? It’s called fundamental investing. Despite some of the annoying bumps that will occur across asset classes as the Fed eventually diminishes its role in financial markets, this may mark the return of investing on the individual merits of a particular region or security. Should that occur, many market participants may look back upon this distorted, post-crisis era of illogical highs and tight correlations and say good riddance. 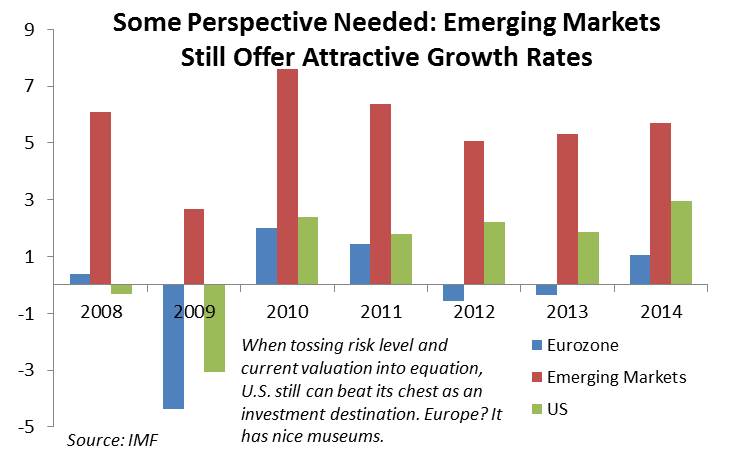