Despite a Weak 2013, Still Bullish on Emerging Markets

Last summer….the July 8th posting to be exact….these pages first ventured into the subject of emerging markets. At the time a bullish argument was put forth for long term….or secular in jazzy investment parlance….growth in these rapidly developing/urbanizing/industrializing regions. Presently when looking at a screen on year-to-date returns across global equities, one cannot help but notice the glaring sea of red in the emerging markets section. During a period in which the S&P 500 has gained a respectable 10.9% (even after Wednesday’s decline) and the Eurostoxx 50 has risen 2.88% despite the perpetual bleeding of lousy headlines emanating from that region, emerging markets as measured by the broad MSCI Emerging Markets Index have dipped 1.2% this year in local currency terms. 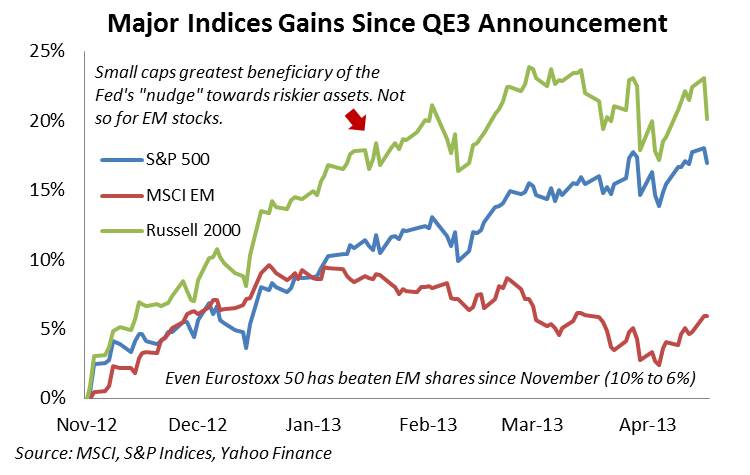 When viewing the chart above and seeing the underperformance of a putatively good source of juicy returns, one may question the cynical premise…..often posited here….that the extraordinary easy-money polices of the Fed and its peers in Frankfurt and Tokyo may lead to bubbles in risky assets such as emerging markets. But rather than offering up a mea culpa to last year’s bullish proposition, we should remind readers the difference between a multi-year secular trend and a (likely deserved) short-term correction to allow the market to blow off some frothiness. And was there ever frothiness. In fact, when the recent rally was ignited upon the Fed’s announcement of its third iteration of quantitative easing, emerging market shares rose toe-to-toe with global indices. And this was on top of a strong spring rally, which all together saw the MSCI EM index gain 17.9% over the latter part of 2012. 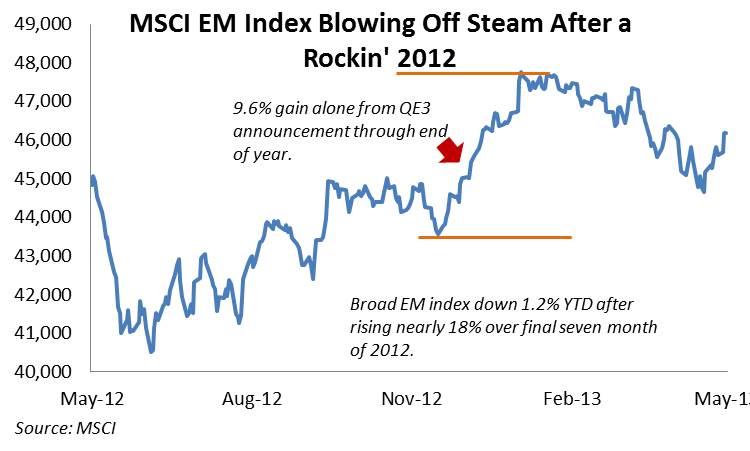 Dialed down expectations of global growth…most of which having been provided by emerging economies since the onset of the twin financial crises…and good old fashioned profit-taking are likely the culprits behind the 2013 dip in EM shares. The real…and more frightening…question is why haven’t major indices like the S&P 500 and Russell 2000 blown off any steam? At over halfway through U.S. earnings season, analysts are still fretful at the lack of top-line growth for S&P 500 firms; this year is experiencing the third consecutive spring-swoon in economic data; and Europe is still in the grips of recession. Where have such suspect fundamentals led us? To nearly 1,600 on the S&P. Go figure.

Rather than rehashing the entire justification for emerging markets exposure, let’s just leave it to two facts, their growth continues to outperform that of developed markets, and as their securities markets continue to liberalize, there will be greater demand from investors eager to get a slice of the pie, especially in light of the laughable yields found in other, purportedly safer, asset classes. Prior to the financial crisis, emerging market growth was a pleasant surprise for investors. Since then, their still respectable growth rates have been a life saver, not only for portfolios but also by being a key source of demand in the real economy.  As seen in the chart below, the growth registered by the BRICS and other major EMs over the past three years makes western policy makers weep with envy.  Even if growth does dip in coming quarters, it certainly beats the sub-2% purgatory in which major advanced economies find themselves.

The table above also highlights the superior fiscal position of most of these countries vis-à-vis developed markets. Russian debt to GDP at 10.9%? China’s at 22.8%?  Italy or the U.S. post-stimulus (and Obamacare) these are not.  Yes, inflation remains a bugaboo for these countries and many have a spotty history of fighting rising prices, but that is why one also sees central bank interest rates (last column) in the range of 4% to 9%. Keep in mind the Fed Funds rate is locked between 0% and 0.25% for the foreseeable future. The ECB will likely lop another 25 bps off its 0.75% key rate on Thursday and the Bank of Japan’s rate is a miniscule 0.1% as the country continues its decade-long battle against deflation.

Such interest rate differentials between advanced and emerging economies provide even further underpinnings for emerging market exposure. Not only are their central banks serious about containing inflation while the Fed may be sowing the seeds for the Weimar Republic Version 2.0, which will gut domestically-denominated savings, but such differentials create the opportunity for positive carry simply by gaining exposure to assets denominated in EM currencies. This was the rationale behind yield-starved Japanese pensioners buying Aussie Dollar assets in the years prior to the crisis and why they are likely buyers of fat yielding Italian government bonds today. Their central bank has forced members of retirement communities to adopt a hedge-fund manager mentality. The quicker U.S. and European investors…even in the retail segment…wake up to this tactic the better.

In the wake of the autumn 2009 bloodbath, investors have shied away from equities, even as major indices doubled their recession lows. Evidence of this has been found in the steady drip of money out of equity funds. In the past year, investors have begun dipping their toes back in the equity pool, but namely in non-U.S. markets. This trend will likely continue the market plays catch up with the 21st century economic landscape. 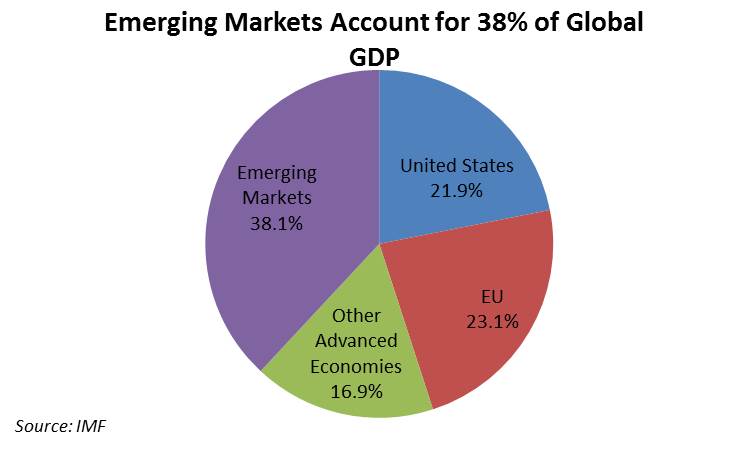 As seen in the chart above, emerging markets currently account for 38% of global GDP, a figure that has grown steadily over the past two decades and one that is expected to continue. This is in sharp contrast to the world’s equity markets. Emerging markets currently constitute only 11.5% of the S&P Global Broad Market Index. If one wants to include all emerging market equities, including illiquid, opaque junk, the share is likely a bit higher, but there is good reason S&P does not include them in this barometer. Not only do many regions not have functioning equity markets, but some that do often have lousy track records with regard to liquidity, transparency, contract law and shareholder rights. No wonder that emerging markets presently take up such a small slice of global equity portfolios. 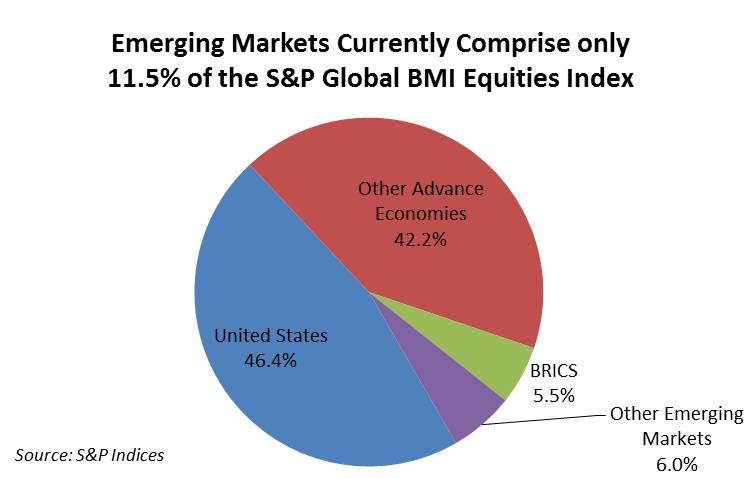 Yet that too shall change. These countries need capital and equities markets are a proven channel in which to attract it. As a consequence laws will be beefed up and state assets will be auctioned off as has occurred (to varying degrees of success and morality) in Eastern Europe and Asia. As these exchanges are established and fortified, investor demand should rise accordingly, especially if advanced markets continue to offer up low returns.

Going Granular
As was pointed out last summer, not all emerging markets are the same. Nor is equities exposure to the theme a homogenous, top-down play. Instead, and as evidenced by the crisis, the global economy is intricately interwoven and still when the U.S. sneezes, much of the rest of the world is likely to catch cold. Decoupled: we are not there yet.  Many market sages point to the need to gain exposure to sectors dependent upon internal emerging market growth rather than those in tune with the global business cycle. Examples of the former include the rise of the EM consumer, the need for infrastructure investment (roads, power grids….flush toilets), banking for underleveraged private sectors and home construction (which China has evidently taken a step too far). Globally sensitive sectors include the likes of energy, basic materials and technology.

A good-bad example of the still real risks in EM investment is the recent trajectory of Russia’s benchmark RTS equities index. Its post-QE3 rally was stronger than many other emerging markets, but its 2013 sell off has given back all those autumn gains. The RTS not only illustrates how volatile EM shares can be, but also the risks of concentration in a few sectors, especially globally sensitive ones such as energy and mining. Worse yet, a major market for Russian energy products is the atrophying European Union. Such interconnectedness has battered other Central European exchanges as well. Of course Russian authorities have not helped themselves given government control of key boardrooms and sectors. Yes I have a soft spot for the place being that it has produced both Dostoyevski and Maria Sharapova, but it has also given plenty of western investors severe headaches. Just ask BP. 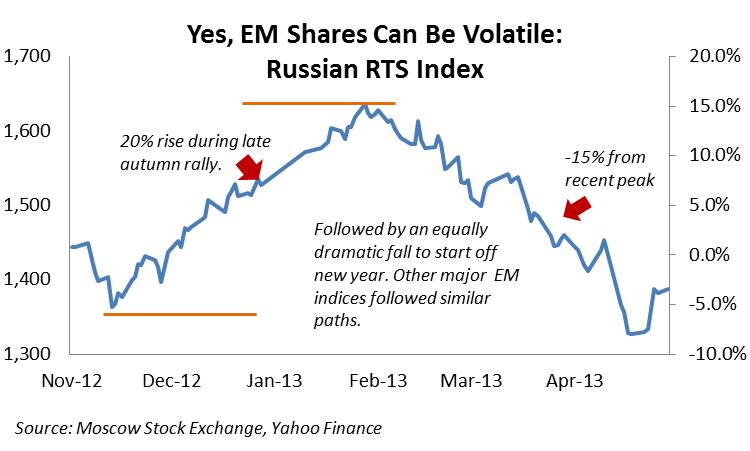 Marching On…With Requisite Caution
With regard to the fundamentals such as demographics, growth rates and interest rate differentials, the justification for emerging market exposure is still valid. As evidenced by its weak 2013 performance, legacy issues such as volatility are still present as well. So are other red flags like transparency, majority state ownership in key sectors and yet-to-be proven inflation fighting chops in some countries. Still, the 2013 sell-off may be a sign of maturity in these markets. After all, the bullish rationale just mentioned has been baked in to valuations for some time. Add the QE3 jolt to the mix and after six weeks and 10%, investors did what they are supposed to do when markets get ahead of themselves: they took profits.