Blowing Holes in Supporting Factors for Equities (Someone's Got to Do It).

When equity markets reach new heights, as has recently occurred, investors ratchet up their divining of data, seeking evidence as to whether prices are justified by underlying factors or if a dreaded correction is waiting around the next bend of lower-than-consensus numbers. When viewing the current landscape, one can be forgiven for being optimistic as key data regarding inflation, interest rates and valuations appear favorable for additional market gains. But silver-lining optimism does not fit investors well. Such dispositions should be saved for entrepreneurs who must convince customers, lenders and investors how their better mousetrap will change the world. Instead, investors must be governed by the mantra, what’s the worst thing that can happen? They are not the kind of people you want to buddy up to at a cocktail party as they neurotically wonder how many pathogens are living on the fruit tray and whether any of the other guests have bothered washing their hands after the initial rounds of handshakes. Ick.

As markets have surged 9.6% year-to-date, one camp of investors…the bulls….makes a case that when compared to the market peaks of April 2000 and October 2007, underlying conditions lend support to the premise that equities can continue their run. In highlighting reasons for caution, the bears point to light trading volume, inferring sidelined investors….and there are many…remain unconvinced; small-caps only matching the S&P 500 rather than registering the outperformance one would expect during a growth-centric rally; and the fact that the market is looking for any excuse to sell-off, as evidenced by the reaction to Friday’s lousy (yet arbitrary and likely-to-be-revised) U.S. payrolls data.

Macro Support for Equities? (And There is No Hint of Irony in That Question)
The elephant in any investment committee meeting is the support provided by the Federal Reserve to risky assets. We know not to fight the Fed, but still it is hardly comforting to allocate capital solely as a reaction to what is essentially a market distortion. But if anything, Chairman Bernanke is committed to making sure the U.S. does not prematurely tighten policy as Japan infamously did in the early stages of its lost decade. So we’ll live with the Fed’s presence in markets for the foreseeable future. In practical terms, central bank intervention is manifested primarily through interest rates. As seen in the chart below, compared to recent bull markets, credit conditions remain loose to say the least. But three years of rock-bottom rates does not a vibrant recovery make. This can largely be attributed to banks hesitant to lend to consumers and small businesses, two interlinked channels essential for GDP growth and job creation. 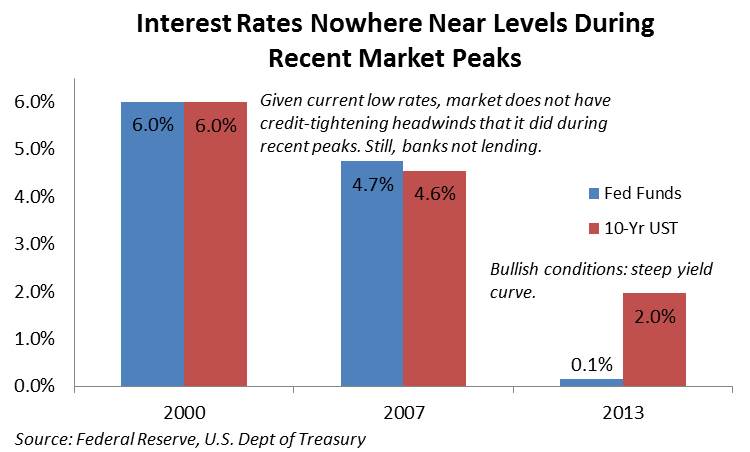 Should lenders regain confidence in clients’ ability to service loans and executives become willing to take on the burden of extra leverage, then low rates could indeed provide a spark to business activity. So with regard to the current rates regime and the Fed’s commitment to maintain it, the environment is favorable for equities. This extraordinary period is further illustrated by the shape of the yield curve on U.S. Treasuries. At the two most recent market peaks, the Fed had already begun tightening its main control mechanism…the Fed Funds rate. This instrument is accurately described as a blunt, indiscriminant tool (think of one of those cool weapons Russell Crowe wielded in Gladiator), which ultimately saps growth throughout the credit-dependent economy. During such periods, longer-term Treasuries rally (i.e. rates fall) as investors seek the safety of government debt and have little reason to fear a bond investor’s arch nemesis…inflation….given weak growth prospects. 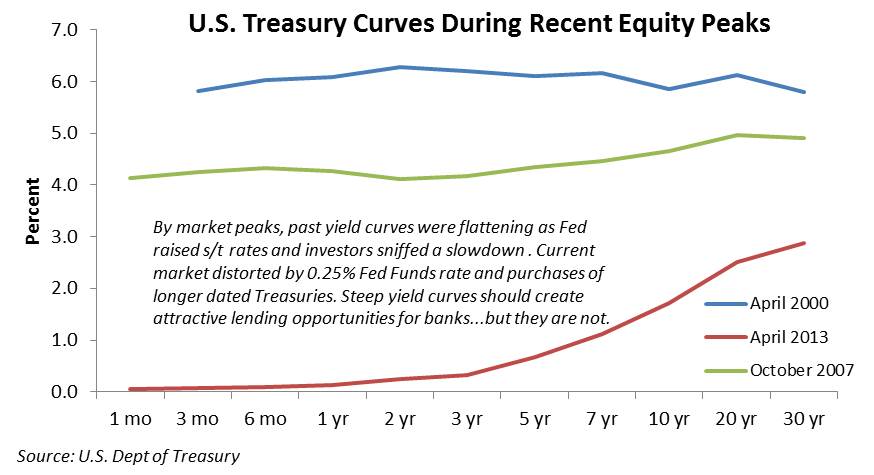 On the subject of inflation, again benchmarking the current environment to recent market peaks, price pressure remains tame. A little inflation is welcome as it is a by-product of robust economic growth. But too much of it diminishes the value of future cash flows, namely bond coupons and dividend payments. In the worst kept secret in the realm of economics, a key goal of the Fed’s QE policy is to drive inflation higher, with 2.5% being the new back-of-the-envelope acceptable level before tightening is considered. So far it has not worked. One may not be able to fight the Fed, but the U.S.  consumer is a pretty formidable force as well, and as long as they are in deleveraging mode (often involuntarily), spurring activity enough to goose inflation remains a tough assignment. Textbook jargon aside, the absence runaway inflation again lends support to equities having further room to rise. 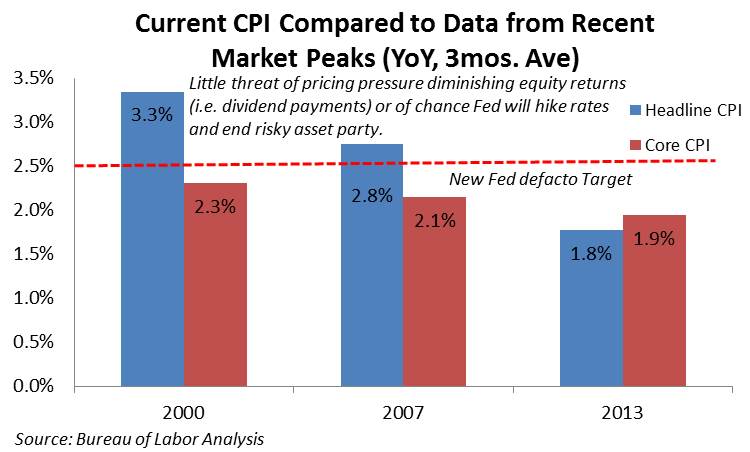 Attractive Valuations, Yes. But Look at What We Are Comparing It To.
Valuations also provide an argument favoring the rally’s continuation. As seen below, based on trailing 12-month P/E ratios, the S&P 500 is more attractively valued than it was during its past two peaks. Of course the frothy valuations of 2000 were a consequence of the ill-fated irrational exuberance of the dot.com era, and while less egregious, rich 2007 valuations were indirectly driven by a red-hot housing-centric economy that proved unsustainable. 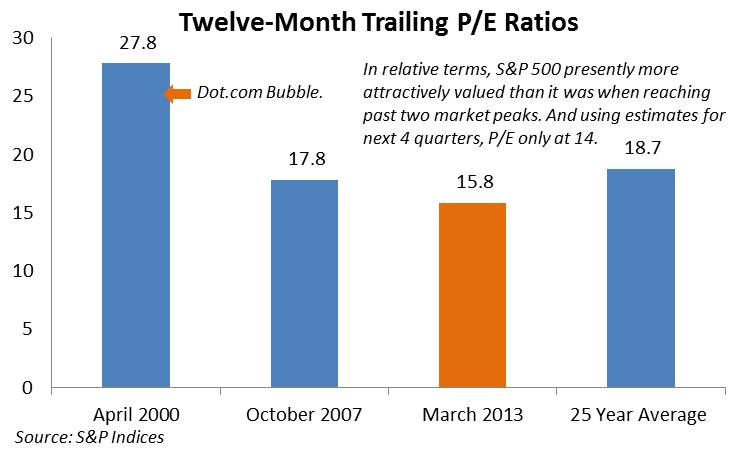 Half Empty? The Glass is Cracked.
Not to rain on the bulls’ parade…..or send them sacrificially through the streets of Pamplona come mid-July….but a load of data internal to equity markets paints a grimmer view of the current rally. Not only have small caps failed to outperform larger corporations, but somewhat paradoxically and as seen below, the recent record highs have been set with defensive sectors leading the way. Usually one would expect cyclical growth sectors, especially those exposed to the global economy, to fuel markets to new heights. Not so this time. Instead investors are favoring sectors that provide the barest necessities in good times and bad. 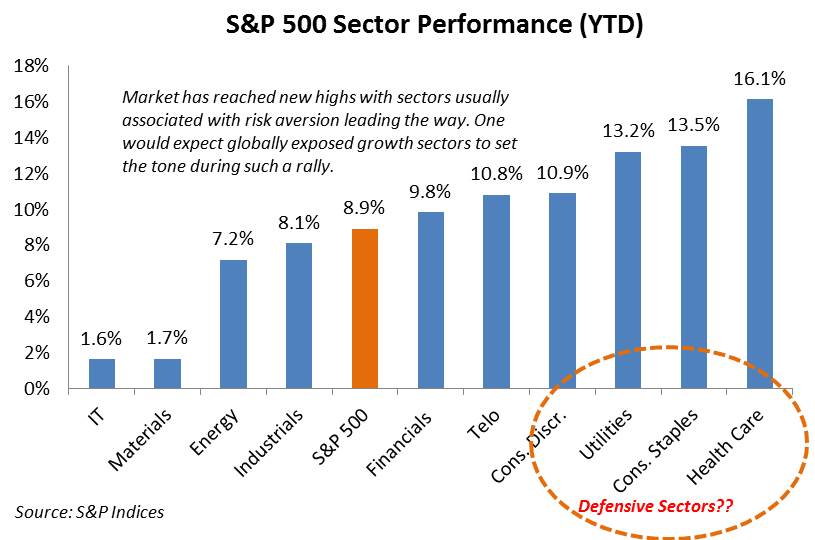 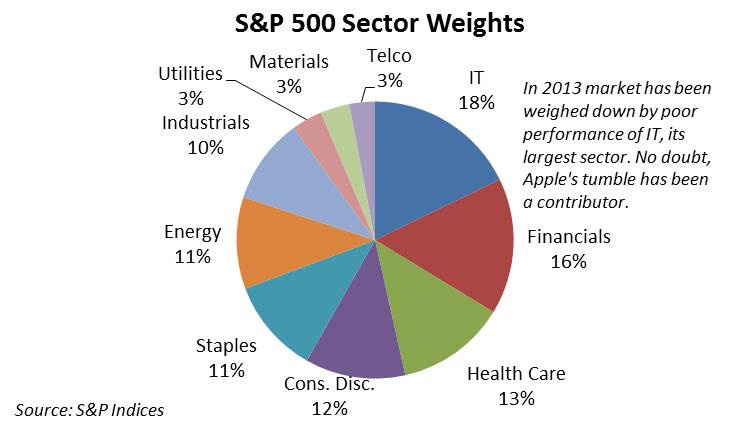 And while the broader S&P 500 P/E may be at a discount to recent periods, the only sectors currently trading at a premium to recent valuations are the three defensive stalwarts of utilities, consumer staples and healthcare. Globally sensitive materials, IT and consumer discretionary (to a lesser extent) are among the most unloved sectors at present. This does not signal that investors are clamoring for exposure to a strong secular growth theme. 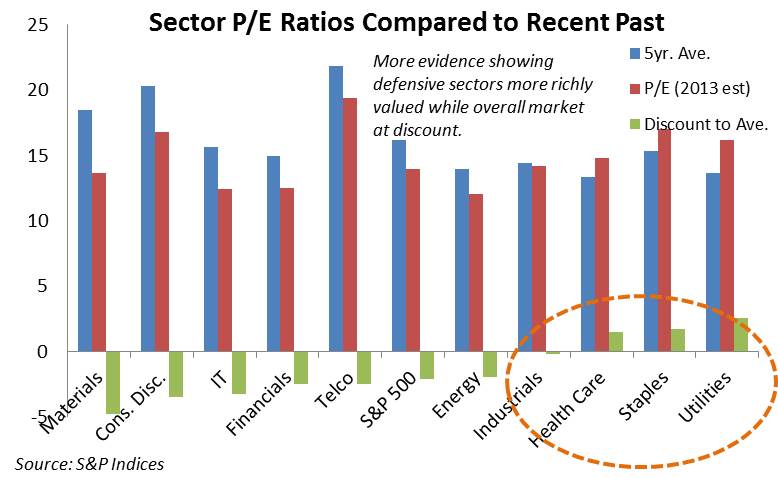 It is easy to forget that the valuation attached to a P/E ratio has two components: the numerator and the denominator. The former is the price an investor is willing to pay for a unit of the latter (e.g. earnings). In recent months prices have reached new peaks ironically at the same time earnings estimates for the first two quarters of 2013 have been dialed down according to S&P Indices. The combination of these two factors means investors are more than willing to pay a higher premium for diminished earnings. I smell the Fed. Last autumn, Q1 2013 index EPS was estimated to be nearly $27. The current estimate is $25.49. Worryingly, this keeps up the recent trend in weak earnings growth across many key sectors. 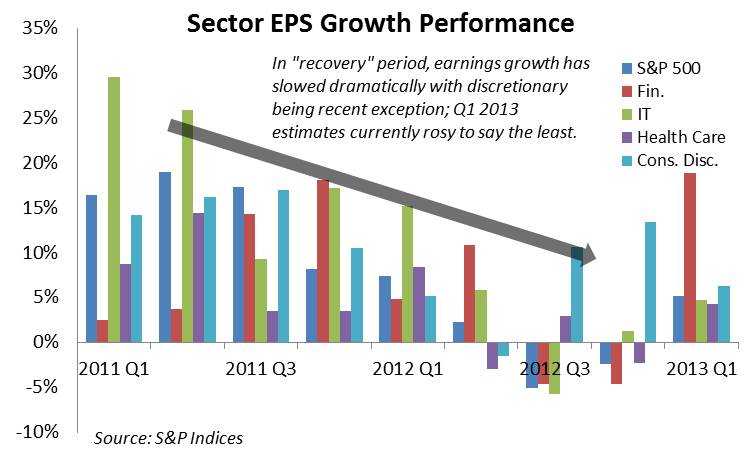 Compounding the risk of earnings growth…and as addressed in the March 22nd posting…is the likelihood that operating margins have reached their cyclical max and investors will now have to rely upon top-line growth for future EPS gains. That is a tall task for a consumer-driven economy mired in the mother of all jobless recoveries.

And Regarding That…..Ahem…..Recovery
Inescapably, this leads us back to the prospects for the broader economy and its impact on equity sentiment. Stock investors, by definition, are focused on future performance. But it is difficult to not glance in the rearview mirror. Yes, past is past, but large, advanced economies do not turn on a dime. Recent trends in GDP and other macro factors provide investors with reckoning points on which to estimate near-term developments. As seen in the chart below, the current strength of the broad U.S. economy lags the levels registered during the past two market peaks. With the tailwinds of vigorous GDP expansion, it is easier to make the case for future equities gains. 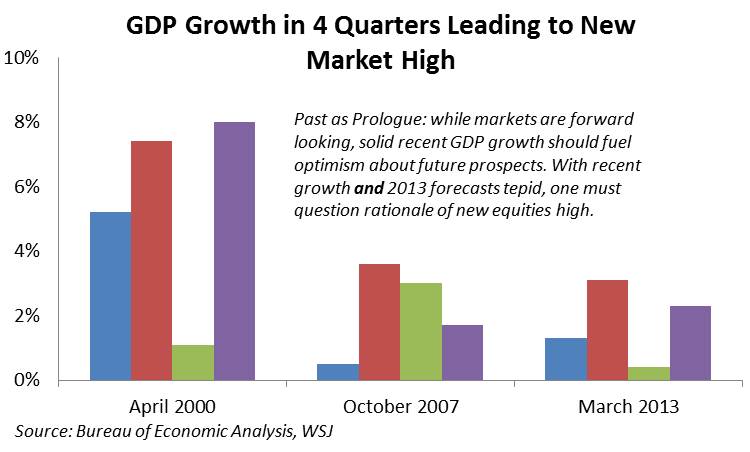 Of course those two periods were followed by notorious crashes, first the dot.com bust and more recently the popping of the housing bubble. The predictive powers of equities investors were not on their best display in either of those situations. While near-term bubbles may not currently be evident, another bugaboo lurks: weak economic growth. Including estimates for Q1 2013, quarterly annualized GDP growth has averaged under 2% over the past year. After experiencing (hopefully) a rebound from Q4’s miserable reading, which may lead to solid Q1 numbers, the economy is expected to slow again over the remainder of 2013 as the effects of the sequester and increases in payroll taxes take root. The final result is another year in the boring, foreclosure-filled, ex-burb neighborhood of 2% growth. Still that is better than the aggregate advanced economy estimate, which will be lucky to hit 1.5%.

Too Much Rhetoric, Not Enough Real Investment
On the surface, the factors singled out by market bulls appear supportive of additional equities gains. But each of these arguments can be turned on their heads. Interest rates will continue to be stapled to the floor because the Fed is deathly afraid of the economy stagnating even further as credit creation remains elusive. A lack of inflationary pressure is evidence that idled workers are not returning to the nation’s factories and office parks in numbers sufficient to drive up demand for higher wages. It also signals that firms continue to have difficulty in raising prices, which as stated, is a necessary ingredient for future earnings growth.

In the absence of the Fed achieving its stated goals, there are two other consequences worth noting. First…and for sure…the excess liquidity tossed from the helicopters is finding its way back into the Fed vaults as lenders prefer to park funds there than taking on new loans. Less certain is the potential for stock market bubbles, which only create ephemeral opportunities for short-term traders looking to play the system. Neither of these will spur the necessary long-term investment needed to improve the nation’s capital stock, productivity, and growth prospects. In other words, current policy is creating an illusion of real investment.

Lastly, and not to single out any segment of the political class (we should be wary of them all), a few factions have spent decades never missing the chance to bash wealth creation via Reaganesque (and Thatcherite) supply-side economics. Yet ironically, the asset-inflation policies championed inside the Beltway is supposed to be transmitted to the broader economy via the wealth effect of  fat cats feeling so happy with their bulging stock statements that they create demand sufficient to hire the (much larger) segment of the population still marginalized from the great recession. In that sense, those in power have married themselves to the policies upon which they have built a career lambasting. In the meantime, the regulatory environment they champion and strict credit conditions (often due to increased regulations on banks) act as a growth-extinguishing wet blanket for the small businesses across the country.