These Clowns May Actually Have a Point.

Every investor has certain criteria that signal when to exit a position. For some it is when the investment reaches fair value thus limiting further upside potential. For others it is periodic portfolio rebalancing. Meeting a particular technical threshold causes investors of that ilk to head for the exits. And famously, it is when the buzz of a particular hot stock or strategy becomes deafening, discussed endlessly in bars, on subway platforms and in barbershops, where the conversation usually centers on mind-numbing sports babble. I am reminded of the latter illustration when surfing the thousand channels in my cable package (none of which are worth watching) and noticing that every commercial not promoting prescription drugs is some guy in a cheap suit hawking gold as an investment. My first thought upon seeing these commercials is “didn’t I buy a set of knives off this dude last year?” and the second one is “dear God, he’s actually making some sense.” This is the same feeling one gets when watching Ron Paul’s libertarian rants and finding himself nodding in agreement. Aside from the direst of the apocalyptic scenarios underlying their rationale for gold investment, many of the central tenets of the gold bugs’ arguments prove timely in this period of easy money and the weakening position of other safe-haven assets. Leaving the possible attractiveness of gold as an investment to the infomercial class, here we will delve into what the recent rally tells us about the economy, namely inflation prospects, and how current policy is distorting financial markets, including those for real assets (i.e. those that should hold value in inflationary periods). 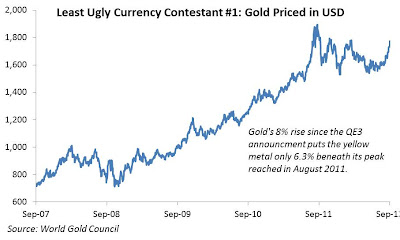 Some Background
When cutting through all the hubbub surrounding gold, one should not lose sight of the fact that it iim onrsome sense a Point.more attention to those gold commercials during halftime of this weekend' unsustainable U.S. fiscal pos essentially a hunk of naturally occurring metal. Its value is derived from the fact that it’s a very pretty and shiny hunk of naturally occurring metal. What’s more, it is quite scarce. It is estimated that since the time our ancestors first grabbed a pick-axe, man has mined roughly 171,000 tons of the stuff. That amount could easily fit into a single Wal-Mart Supercenter. The combination of allure and scarcity has made gold a standard unit of trade throughout history. Fast forward to the days of modern currencies and sophisticated investments, the rationale for storing one’s wealth in gold becomes more complex. Commerce is eagerly conducted in currencies no longer backed by a specific amount of gold, and as an investment, gold just sits there, yielding nothing. Not only does it not spin off cash like a bond or dividend-paying stock, but one, if smart, has got to pay a well-armed custodian to keep it under lock and key. Over the long-term gold’s appreciation is laughable. In 1900 gold traded for $20.67 an ounce, or $503 in current terms. As recently as 2006, the price of gold was below $600. A hundred bucks of appreciation in a century? Sign me up.


But in the short-run, gold can see massive appreciation. Of course we are speaking of periods of economic tumult, inflation and a lack of trust other investment instruments. Ring familiar? The prime culprit, according to Dr. Paul and his acolytes, is fiat money. As stated earlier, gold is pretty hard to extract, thus lending to it the qualities that make it a stable medium of trade. By contrast, in the era of fiat money, central banks just need to flip on the printing press and voila, everyone is swimming cash. Case in point: at the current spot price ($1,776 / troy oz.) all the gold in the world would have a value of $9.76 trillion. According to the World Gold Council, the supply of broad money globally is approximately $60 trillion. That’s a lot of paper with pictures of old men. Given the rupture in the compact between authorities and citizens that the bills in their wallets won’t be cavalierly debased, it is no surprise that people have begun looking for alternative stores of wealth.

As with other commodities, gold has its own supply and demand dynamics. It should come as no surprise that the largest source of gold demand is from the jewelry industry, a market which is dominated by Indian buyers, who account for about one-third of gold jewelry demand. As recently as five year ago, jewelry still accounted for over 75% of total gold demand. Since then its share has dropped to 43%. 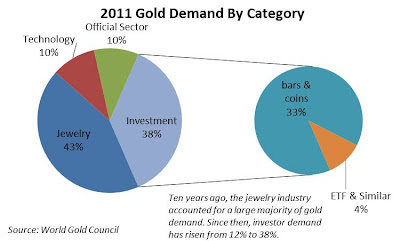 Driving the shift is the desire for safe-haven investments during the financial crisis along with a proliferation of new vehicles such as ETFs, which have increased accessibility. As seen below, investor demand has risen from 12% to 38% over the past decade. High prices, consequently, have dramatically curtained jewelry sales, especially in poorer nations such as India. 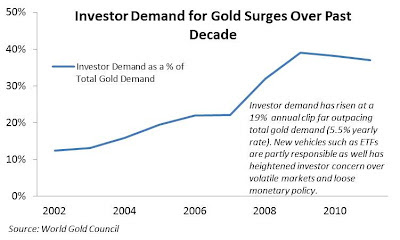 Why the Gold Rally Now?
A central premise for owning gold is its history of holding value in periods in which the purchasing power of paper currency, namely the U.S. dollar, weakens. But inflation across the developed world remains muted. The IMF projects that inflation in advanced economies will remain below 2% for the next five years as global growth remains lukewarm. Even in emerging markets the rate of inflation is declining (disinflation), further echoing growth headwinds. 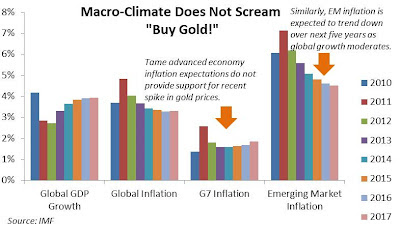 Rather than red-hot economic expansion spurring inflation, investors are worried the historic monetary easing programs undertaken by central banks, especially the Fed, will debase major currencies. Although weak growth may be keeping a lid on inflation today, the torrent of liquidity will ultimately find a home and possibly cause asset bubbles in the process. Often gold rises with industrial commodities like crude and base metals as the same high growth rates that increase demand for those products spurs inflation (for which gold is a useful hedge). For the near future, the risk is that yield-seeking investors, riding the wave of QE3, will seek commodities exposure and in turn drive up the prices for those industrial inputs, fueling inflation even in a period of tepid real economy demand. 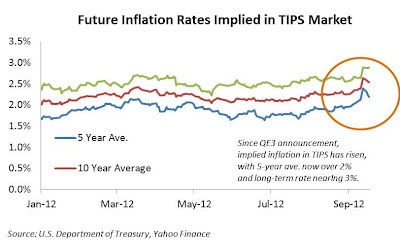 Woe is the Dollar


Gold is now sought not only in anticipation of such inflationary pressure, but also due to investors recoiling from holding USD-denominated financial assets in this period of easy money. Further diminishing the dollar’s outlook is the reality that central banks are famous for not reacting in time to mitigate incipient inflation, an outlook possibly priced into a recent jump in TIPS implied inflation (above). There is also the grim U.S. fiscal position making the allure of inflating away the country’s massive external liabilities via a weaker greenback a plausible scenario. Sorry China, but thanks anyway for purchasing the trillion-plus of U.S. debt.


For reasons explained above, the dollar has a negative relationship with gold. When the value of the world’s dominant currency rises, the desire to hold gold as a hedge recedes. This relationship has grown stronger over 2012, especially during the summer when weak jobs data created the expectation that the Fed would once again resort to extraordinary measures, despite how bare its cupboard was. In certain periods of market tumult, gold and the dollar can move in lock step as investors flock to safe havens such as U.S. Treasuries and bullion. Not to downplay the potential repercussions of a Eurozone meltdown on financial markets (the S&P 500 is nearing a five-year high so no worries there….for now), the rise of gold in the absence of a crisis (or inflation) can be best seen as a lack of faith in the forward path of the greenback given the dubious monetary and fiscal policies emanating from the Beltway. 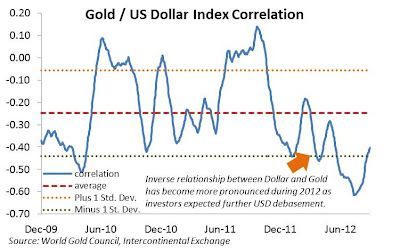 Speaking of the Euro…
If the rise of gold vis-à-vis a particular currency is considered a bad harbinger, then the Euro is in real trouble. This month gold hit a record high in Euro terms and has risen 163% over the past five years against the common currency. This period not only covers the global financial crisis, but also the three-year old Eurozone crisis that has been characterized by a steady retreat by the ECB from its stable money mandate and its willingness to overlook multiple dictates, such as those governing the credit quality of collateral and the purchases of sovereign debt. 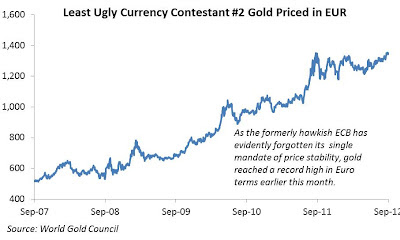 Whereas the Euro has endured a slow bleed over the past year in gold terms, the metal’s recent spike against the dollar….putting it only 6.3% below its record high….has been a summertime phenomenon. Since May, Gold in USD terms has gained 14%, compared to a 7% against the Euro, the cause of which, again, was the market’s (correct) assumption that the Fed would be forced to act in the face of chronic 8%-plus unemployment. 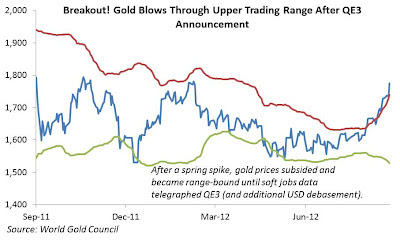 And in the End
Gold’s steady rise can be seen through two lenses, neither of which is rosy. Either it is another asset-bubble induced by the Fed’s loose monetary policy. Eventually the folly of putting a hunk of one’s net worth in a rock that yields nothing will be recognized and investors will exit the trade. But maybe better a gold bubble than once again building endless subdivisions of cheap houses. Or investor demand for gold can be seen as a prudent move to hedge against the continued downward path of the dollar most recently fueled by three rounds of quantitative easing (slick parlance for printing money).  Should the Fed be able to sop up these liquidity injections in time to nip inflation (either caused by real growth or rising commodities prices….yet another speculative bubble caused by the Fed) in the bud, then this may all end well. And perhaps policy makers will get serious about tackling the unsustainable U.S. fiscal position and thus take away that USD headwind. If these two steps do not happen…and that’s a big if….one may want to pay a bit more attention to those gold commercials during halftime of this weekend’s football games.
Posted by Rob Morrison at 4:47 PM