More QE? Why Not? What's the Worst That Could Happen?

Well they did it. To no one’s surprise given the summer’s downward trend in jobs data, the Open Markets Committee (FOMC) of the Federal Reserve announced additional easing measures, this time in the form of mortgage backed purchases. A quick refresher: QE1, initially announced in late 2008, grew to encompass over $1.25 trillion in mortgage backed securities purchases, mortgage agency debt (Fannie & Freddie) and a few hundred billion in U.S. Treasuries for good measure. To pay for it, the Fed cranked up the printing press and grew its balance sheet from $900 billion to over $2 trillion. On its footsteps in 2010 came QE2, focused on Treasuries this time, and later Operation Twist, which lengthened the duration of government debt held. Clearly none of it worked given they are back at it again. Like a shell-shocked infantryman crawling around the bottom of a smoke-filled trench searching for anything to stuff in his rifle’s chamber, this is what they came up with: A promise of open-ended monthly purchases of $40 billion in mortgage securities in addition to reinvesting maturing principal in similar securities. Operation Twist will be extended and the period for the Fed Funds rate to be stapled to the floor stretches out through 2015 from mid-2014. Think about that. Seven years of the overnight lending rate at 0% to 0.25%. Does this not reek of panic? 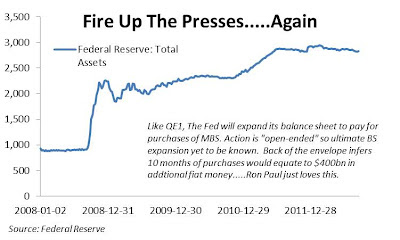 Let’s just say….for argument’s sake….that these measures actually move the dial and prod GDP out of its sub-2% funk and cause unemployment to dip below 8% (so much for 2008 election promises). This would redefine a pyrrhic victory as the potential consequences of such measures are well documented….yet glossed over by the FOMC. The most immediate (and designed) effect is a rush towards risky assets as investors know that Ben has their back. During the past few years, Fed purchases have accounted for between 50% and 70% of new government debt issuance. This crowding out of the market for risk-free assets has pushed investors further along the risk spectrum. Following in the paths of QE1 and QE2, softer data over the summer catalyzed markets in expectation that the Fed would have to take additional measures to spur growth. Since May the S&P 500 has gained 14%. Copper has risen 15% just since late summer, and crude is up 25% since July (in part due to rising Middle-East tensions). Emerging markets…the poster child of risky assets….have gained 10% as measured by the MSCI EM index. Not quite the 40% rise during QE2, but we’re not done yet. Conversely the dollar has fallen as it faces additional debasement with the USD dropping 7.2% against the comatose Euro, hitting $1.30, and the broader dollar index falling 5.8% since mid-July. Gold, too, has continued its march upward. 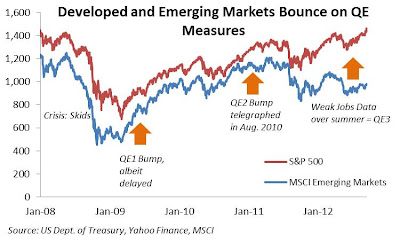 What if the market threw a rally and no one came?
Usually the health of the U.S. stock market is aligned with that of the country’s population. Not necessarily the case this time. A characteristic of the post-crisis recovery in share prices is the absence of market participants. Consistently investors are pulling money out of domestic equity funds. So when the Fed Chairman speaks of a wealth effect as citizens giddily open their 401k statements, he skips the fact that there are fewer investors reaping this paper windfall. And what bounce there is, is likely offset by the fact that Americans’ largest asset is their home, which in many cases has taken a 30%-plus haircut over the past half-decade (hence the MBS focus on QE3…..more on that later). Investors are not stupid and recognize that the rise in share prices is not being driven by fundamentals but instead by the Fed’s distorting actions in the markets. The argument of rising share prices, buttressing corporate coffers and spurring investment, hiring, etc., has fallen flat. Without fundamental strength, who in their right mind would trust these pre-crisis levels? Speaking of fundamentals….and solidifying the disconnect between Wall Street and Main Street….whatever earnings growth there has been has not come on the back of rising revenues, but instead by cost cutting. And in a service economy, that means job-cuts. “Honey, great news. The 401K is up, and I just got laid off.”
The Long Shadow of Short-Sighted Policy


The Fed was correct in its statement that inflation is within its acceptable range, thus giving it cover to direct fire at the other half of its duel mandate: the bleak jobs situation. But Fed action is notoriously lagging (the immediate goosing of financial markets not withstanding). It will take months to determine whether these new measure stoke economic growth. It will also take months to see if they have sown the seeds of incipient inflation, a phenomenan central bankers are notorious for failing to get in front of. As has been argued in these pages, if one can count on recent Fed policy for anything, it is for laying the foundation for price increases. As crude, copper and other industrial inputs become destinations for yield-seeking investors, the subsequent price gains will eventually be passed onto consumers. The expansion of the Fed’s balance sheet only further debases the dollar, making commodities even more expensive in USD terms. Likewise, imports become pricier as the dollar weakens versus the currencies of major trading partners. One could argue that a weaker USD will increase export demand, but that ignores the fundamental reasons why previously robust exports have tapered off: emerging market growth is slowing and Europe is still trapped in an endless high-debt, low-growth death spiral.
Housing Appreciation……Since It Worked So Well The First Time
Just as the Fed’s purchase of Treasuries is meant to push up equity prices and supposedly inspire sufficient confidence to cause consumers to open their wallets, the focus on MBS is meant to buttress home prices. By becoming a buyer of MBS, the Fed hopes to cajole banks to finally deploy their considerable reserves by originating new mortgages, which can then be passed along to the marginal buyer (the Fed). In 2011, total MBS new issuance was $1.2 trillion.  By purchasing MBS at a monthly clip of $40 billion, the Fed would account for only 39% of new issuance. And this amount is before the QE3 announcement so any expected bump up in issuance would see the Fed’s influence on the market diminished. 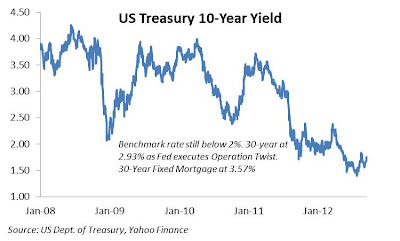 As with stock market gains being caused by Fed shenanigans, MBS purchases would create a distortion in the marketplace and further prevent housing from finding its proper supply/demand equilibrium. It is a tall task to expect banks to start lending again. Subprime borrowers are out of the equation, so we can forget about them. Demand for both commercial and prime residential mortgages has returned. As seen below, banks have yet to loosen lending standards. As many bad loans have already been written down, a key reason why banks have yet to lend is fear the property (the collateral) price will fall, leaving yet another underwater loan. Expecting prices to rise solely on Fed intrusion into the market is a tough proposition for a banker to make. Banks getting hammered for robo-signing foreclosures and other (real and perceived) transgressions at the hands of regulators only further tamps willingness to lend. 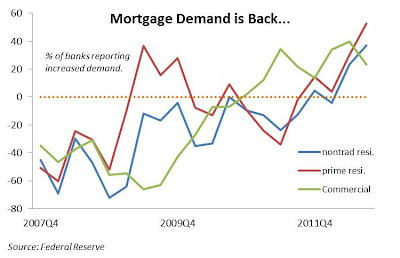 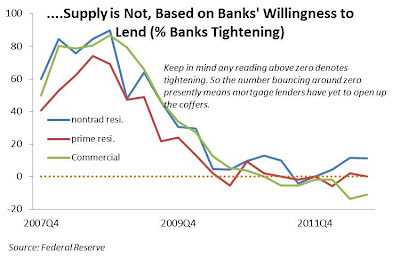 Lastly, what if housing takes off? Will that really create the job growth, which is supposedly the aim of these measures? Do home-construction and related services again become drivers of the economy as they did in the run up to the crisis? As stated here previously, a robust housing sector should be a consequence of a strong economy, not a primary source of it. What do artificially supported home prices do to create high-value, export-oriented manufacturing and knowledge-based jobs, the kind the U.S. needs to rebalance its economy from an overdependence on consumption?
Plenty of Blame to Go Around
One is tempted to not blame the Fed for trying. Chairman Bernanke  has reiterated the limitations of monetary policy and how actions from other government entities would increase the efficacy of the Fed’s measures. Unfortunately, the administration pulled the arrow from its fiscal stimulus quiver and shot it straight towards programs supporting favored constituencies rather than undertaking projects that would increase national productivity (i.e. shovel-ready infrastructure). Yes the country was in a crisis, and these good people may have needed the help, but there was no long-term magnifying effect as promised. Instead, the band-aid only served to diminish the federal government’s fiscal position. With no creative ideas from the administration or congress…and with the looming fiscal cliff…the upside of QE3 is limited and the downside, in the form of inflation and a debased dollar….may be all we get from it.
Posted by Rob Morrison at 12:52 AM