Time Has Helped, But What Else Is Needed To Mend The Housing Market?

This post was originally to be about the U.S. housing market. It still is. But one cannot approach the subject without broaching two other dominant themes hovering over the American economy: consumer debt/deleveraging and the employment situation. As will be explained, these three are inextricably linked. Housing is what got the country into this mess and the question on everyone’s minds is whether a bottom in the housing market may finally enable the recovery to reach the elusive escape velocity. There is a bucket of housing data out there…and much of it remains mixed….but some key indicators hint that the descent may have reached an inflection point, if not a rebound. The charts included in this entry illustrate the sector’s meteoric ascent and equally monumental collapse. They also reflect grounds for guarded optimism, yet also highlight changes in mortgage lending conditions that will continue to create a drag on housing expansion for the foreseeable future. First some background.


When I first heard recent administrations from both sides of the aisle speak of increasing home ownership and creating an equity society, I thought “how brilliant.” By improving education, job training and productivity, along with increasing consumers’ financial IQs with regard to the risks/benefits of debt financing, the country will propel its workforce back into its rightful place as the global leader in value-added job creation. As a consequence of growth and rising earning power, the pool of worthy homeowners will be expanded.  Silly me.  Instead we got a system which took advantage of the nation’s lack of financial intelligence by saddling citizens with convoluted mortgages and other debt products to make up for years of flat wage growth, especially when adjusted for inflation. Now, as consumers attempt to crawl out from under their mountain of debt, they are concurrently dealing with declining property values and fearful of losing their jobs…if they haven’t already. Which of these three issues is the true lynchpin and thus has the ability lead the other two towards the promised land of recovery is the trillion dollar question.
Are We There Yet?


Historical examples (yes, many nations have been through this before) tell us that in a housing-bust recession, equities, being forward-looking, hit bottom first and then begin to rise as investors anticipate an incipient recovery. Sure enough, from its March 2009 low, the S&P 500 bounced back 79% by April of the following year. Next to bottom is the economy itself. Nominally the U.S. has been out of recession since June 2009 (stop snickering).  Last to come around is housing as the market must work through the bubble-induced inventory overhang. As seen below, in Bernanke-parlance, there are some green-shoots of optimism in recent data.
Two telling indicators are housing starts and new homes sold (see chart below). From 1980 to 2000, starts…including multi-family units…averaged around 1.4 million annually.  By 2005 they reached 2.07 million. Sales of new single-family homes averaged 664 thousand units during those 20 years, but doubled to 1.3 million by 2005. In 2011 starts and new homes sold fell to 609 thousand and 306 thousand respectively.  The (slightly) good news is the rate of year-on-year declines has subsided, and for starts it has actually turned positive. 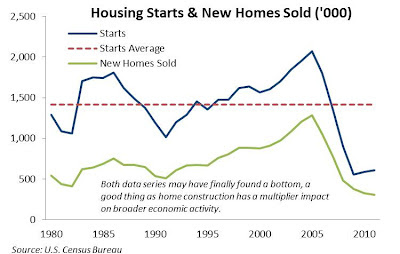 The reason why this recession was so catastrophic was that much of the past decade’s economic growth was tied to the housing boom,  thanks to the laughably broad assortment of credit products available to people who had previously had limited access to financing. Residential construction has a magnifier effect on the economy in normal times, due to the need to outfit homes with flat screen TVs, sofas, and lawnmowers. During the 2000s, this contribution to GDP was amplified by the sheer volume in new home construction along with home-equity loans spurring consumption of non-housing related products. The removal of this catalyst has had a drag on the overall economy. Between 1990 and 2000, residential construction’s share of GDP averaged 5.1%.  By 2005, it peaked at 6.1%.  After that year, home construction has been a net drag on GDP. Consequently, construction’s share of GDP over the past two years has diminished to 2.5%. 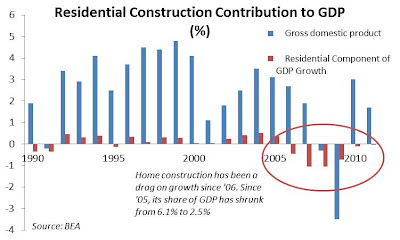 The dramatic curtailment of home construction has enabled the market to work through much of its inventory overhang. Simple economics teaches us that lower supply should put a floor on prices, a trend reflected in recent data, such as those highlighted in the Case-Shiller 20 City Composite Home Price Index. An eventual recovery in prices will be a godsend for the millions of Americans underwater on their mortgages. It could be a double-edged sword however as stabilization could cause both homeowners and banks with foreclosure inventory to enter the market seeking to take advantage of the improved pricing. Stay tuned. 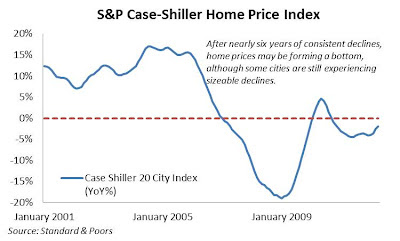 In past (non-housing related) recessions, a reduction in interest rates often spurs home-buying and associated durable goods, thus housing leads the way back to the promise land of recovery. Not so this time. Not only must excess inventory be worked through further (including the shadow inventory of foreclosed homes not yet on the market), but also the conditions which created the environment of easy financing during the 2000s have largely disappeared.  Going forward, the country cannot expect an outsized contribution to national output from the housing sector. More realistically, the best that can be hoped for is construction curtailment to cease being a drag on the economy and eventually return to being modest contributor to broader growth.
Paradise Lost


In order for that to occur, inventory must continue to be whittled down. And as seen in the chart below, that has slowly been happening.  Rationalized inventory is but one necessary component to a recovery in the housing market. Two others are demand from would-be homeowners (or those looking to upgrade) and access to financing such large purchases. On both accounts the situation turns more pessimistic, and it is here that the connection between housing, deleveraging and employment appears. 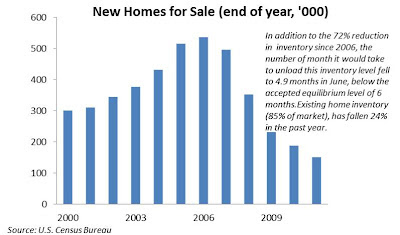 The so-called shadow banking system, which created a seemingly endless supply of mortgages by securitizing and pawning them off onto investors, will likely never again provide such a boost to the housing market. Not necessarily a bad thing. Given the damage caused by the loose…or nonexistent….lending standards prevalent during the crisis, banks have become parsimonious in underwriting new mortgages.  On the demand side, even if they could qualify, most consumers are more concerned with shrinking their balance sheets to more manageable levels. And there is potentially a long way still to go. Historically, the ratio of consumer debt to discretionary income has been 85%. At the apex of the credit bubble, it had reached 130%. Five years into the great-deleveraging, the rate is still in the elevated range of 120%.  Fear is that reversion to the historical mean could take several more years and further diminish consumers’ willingness to spend, a grim prospect given that personal consumption accounts for 70% of U.S. GDP. 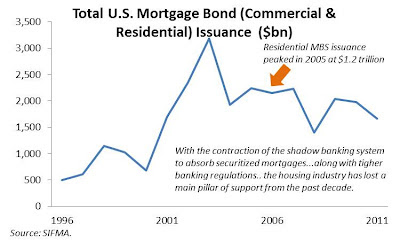 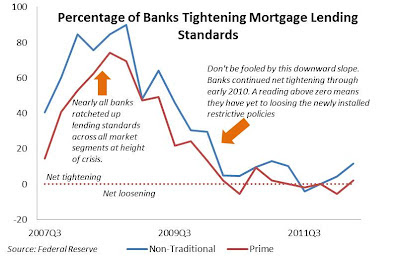 
Is there something that could not only cause banks to gain more trust in potential customers’ ability to service debt and also give consumers the confidence to take on long-term fixed obligations? Job creation sufficient to not only keep up with population growth but also absorb the four-plus million American workers who have yet to return to the workforce since the onset of the crisis would certainly help. Employment growth remains weak. And without confidence in their future earnings prospects, consumers will be more than willing to let deleveraging run its course, which further delays a recovery the housing market. An increase in the rate of home ownership is linked to household formation. While living in one’s mother’s basement may provide the desire for a recent graduate to get a place of his/her own, the combination of meager job prospects and a mountain of student loans limits one’s ability to act. Consequently, household formation has taken a hit during the crisis. Improvement in the labor situation could reverse this negative trend. A better employment picture would positively impact other hard-hit real estate segments as well. A growing workforce means greater demand for office and commercial space, thus eating into that inventory. Fatter paychecks translate into more money to spend on shopping sprees and holidays, which lends support retail space and hotel segments. 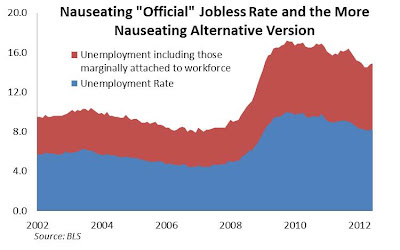 The federal government has the habit of applying Band-Aids to gushing wounds. Programs such as first time home-buyer tax credits and loan modification have either simply pushed forward purchases or had a marginal impact. With 30-year mortgage rates under 4%, home affordability is at an all-time high. The few who qualify for stricter lending standards have already refinanced or upgraded homes….if they could unload their former abode. Time has helped housing convalesce by allowing inventory to shrink. A true housing recovery, as with many other segments of the economy, will rely upon steady job growth. Given the second quarter’s slowdown in job creation, not enough is being done on that front. If policy makers want to ensure that housing once again starts contributing to broad growth (via construction, ancillary services and consumption), it must adopt pro-growth policies that will provide confidence for small-business job creators and corporate planners to expand payrolls in order to meet robust future demand for their products and services. As evidenced by the torrent of new regulations and proposed tax hikes on business flowing out of the beltway, the concept of creating such a productive, risk-taking environment has yet to take root.
Posted by Rob Morrison at 11:14 AM